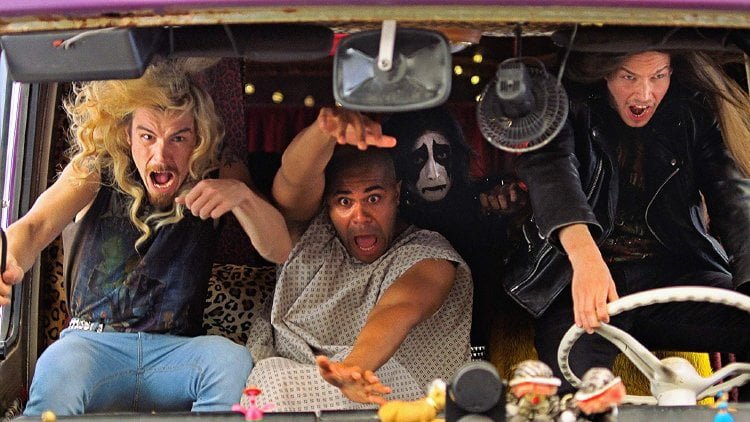 Turo (Johannes Holopainen) and the other three members of their unnamed Finnish heavy metal band have dreams of on-stage fame and fortune. They get the amazing chance to perform at the famous Northern Damnation Festival in Norway, but Turo must overcome his stage fright when they take to the road for their “Heavy Trip.”

A Finnish comedy about a heavy metal band named Impaled Rectum that practices in one of its member's family reindeer slaughterhouse and whose lead singer is bullied in their small home town is an unexpected, charming delight. Believe it. Grade:

I expected a Finnish comedy (I did not know there was such a thing) about four guys from Lapland who have a heavy metal band and journey far away to perform their dream - well, I did not know what to expect. Directors and co-writers Juuso Laatio and Jukka Vidgren (with co-scribes Aleksi Puranen and Jarl Olavi Rantala) give us a fun, complex comedy that deals with serious issues, like death, but kept a smile on my face from start to finish with the wry, often slapstick humor. “Heavy Trip” is an unusual film for me to review. There is much going on in the many layers – friendship, prejudice, fear, pleasure, pain, unrequited love and facing one’s lions - and all are a part of the band’s story. But, I felt so much pleasure through the discoveries the storytellers lay out that I feel you need to see this in the same way I did, with an untainted open mind. Have fun!