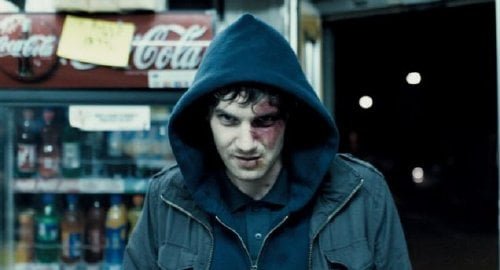 Jamie Morgan (Jim Sturgess, "21," "Fifty Dead Men Walking") skulks around the East End of London taking photographs and trying to hide the heart-shaped birthmark on his face from passers by. As gang violence in the neighborhood escalates, with demon-masked members hurling Molotov cocktails at innocent bystanders, Jamie watches and realizes that there are real demons at work here. When he attempts to strike back after his beloved mum (Ruth Sheen, "Vera Drake") has become their victim, he meets their leader Papa B (Joseph Mawle, "Red Riding Trilogy's" Ripper), who extends an offer that will render him "Heartless." Writer/director Philip Ridley ("The Reflecting Skin") has created a visionary world where beauty falls way to a Kingdom of Hell that strongly suggests the work of British horror author Clive Barker. His theme is perfectly expressed by a line he has Jamie's new neighbor, A.J. (Noel Clarke, "Centurion") quote - 'Beauty is the beginning of terror' (Rilke) - and he's embedded heart shapes throughout his imagery in both obvious and subtle was. "Heartless" is the study of a soul too sensitive to live with violence told within a horror-cum-magical realism framework which falters only with one decision its hero makes that is too entirely out of character. Ridley's written a stunning father (Timothy Spall, "Sweeney Todd," "The Damned United") and son scene to end his film, though, which pulls everything we've seen before into sharp and heart-wrenching focus. The story is smartly multi-layered. Jamie shoots eerie images in the East End, including a vacant apartment window across the street from circular power grid which dominates the landscape much as the gasworks did in "Spider." When he develops his photos, he sees an eerie, hooded figure he did not see with his naked eye. His neighborhood grocer Vinnie (Fraser Ayres) offers him a weapon to protect himself. News reports of gang murder dominate the television and one witness, a little Indian girl, voices what Jamie thinks he already knows - those attackers aren't wearing masks. He begins to see them all around, setting fires at night, screeching like birds of prey, and he finds symbols of their faces painted on walls. Jamie is close to his mum, and, we can see was at least as close to his dad, gone these ten years. Older brother Raymond (Justin Salinger) eyes him watchfully, but has his hands full with his own son Lee (Luke Treadaway, "Clash of the Titans"), whose behavior and hood-wear cast suspicions. His new neighbor A.J. tells of past gang association and shows him a tattoo of a crocodile which Jamie later sees on the news, a victim torn apart, police looking for information. After their mother is killed in another fire attack which Jamie is held to witness, he goes back to get that gun from Vinnie, but after attempting to use it, he's called to the building his dad once lived in, directed to the #157 (add them) on the 13th floor. There that young girl, Belle, awaits and soothes him into meeting Papa B, who tells him how humankind depends on chaos and atrocity in order to create. With the promise of defacing some buildings with godless graffiti, Papa B cleans Jamie's birthmark away. The next day he meets Tia (Clémence Poésy, "In Bruges"), a model who transfixed him before and who now proclaims him beautiful. But just after he's had the happiest day since his dad died, along comes the Weapons Man (Eddie Marsan, "Sherlock Holmes") in Papa B's employ with some startling news about Jamie's deal. And Marsan's performance is the high point of Ridley's creepy and melancholy film, a burst of blue collar sarcasm that makes one laugh out loud. Marsan makes him a common East End gangster who just wants to get home to tea who also happens to belong to the supernatural (watch Marsan's amusing body language as he uses a V'ed branch to 'divine' Jamie's weapon). It's Sturgess, though who grounds the film with his troubled, quiet humanity. If only Ridley had found a more convincing way to have him deal with the devil. Belle, too, is a bit too odd of an emissary. The intersection between fantasy and reality, the external world and family, through the character of Tia, is much better handled. And at least when Jamie must make his inconsistent character move, Ridley not only stages something dehumanizingly creepy, but provides a prop that helps reconnect the dots. Striking cinematography by Matt Gray, including shots of a devastating sunset and an iconic tree, helps bridge the dual worlds that Ridley has created, although the special effects work and wardrobe (those hoodies should be sweatshirts, not cheap nylon jackets) used to create the demons isn't up to snuff. In an unusual extra credit. Ridley's also cowritten ten original songs, three of which are performed by Sturgess.