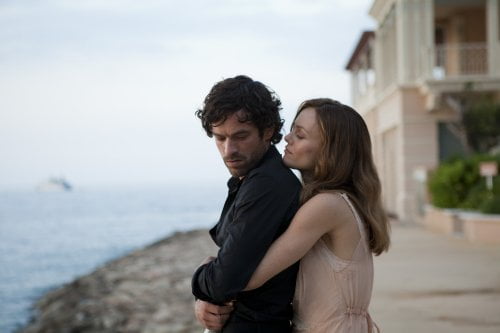 Alex Lippi (Roman Duris) has the perfect job. He and his sister, Melanie (Julie Ferrier), own a company with Alex as its commodity. He hires out to concerned fathers/brothers/sisters/friends who are concerned that their sister/daughter/granddaughter/niece is in a bad marriage or engagement. Alex’s job is a simple one: woo the target lady and break up the couple. And, he is damned good at his job, until he takes the assignment to separate Juliette (Vanessa Paradis) from her fiancé in “Heartbreaker.”

Alex Lippi (Romain Duris, "The Beat That My Heart Skipped") is good looking and charming and able to cry on cue. He works with his sister Mélanie (Julie Ferrier, "Micmacs") and her husband Marc (François Damiens, "JCVD"), but he's front and center as they work to break up relationships, but only the kind where the woman is unhappy without admitting it. Alex is a professional "Heartbreaker." The romantic comedy genre has gone to the dogs of late, but lo and behold, a French television director (Pascal Chaumeil), trio of writers (Laurent Zeitoun, Jeremy Doner (TV's "Damages") & Yohan Gromb) and quirkily sexy costars Duris and Vanessa Paradis ("Girl on the Bridge") prove all is not lost, especially when the woman whose heart needs to be broken's favorite movie is "Dirty Dancing." This closing night film of Boston's Museum of Fine Arts' 15th annual French Film Festival is jump to your feet crowd pleaser. The film begins as we unknowingly witness Alex at work. In Morocco, safari-suited Florence (Amandine Dewasmes) wants to visit the dunes while her boyfriend only wishes to lie by the pool and attend a wet t-shirt contest. She ends ups alone, pointed towards a 'doctor' who is headed in her direction. After a complete snow job where Alex 'vaccinates' young children as his 'nurse' (Mélanie) confides he's never looked happier and Florence is the obvious reason, he lets her down lightly on the dunes (complete with 'rare diamond doves' released by Mélanie and Marc) after some passionate smooching. His practiced patter is slick - he cannot love again, but she has awakened him and now that he's invested her with romantic self confidence, she can go off to love again, and better. Cut to Alex in a white suit strutting through the airport, internalizing his modus operandi. But of course his next client, Juliette Van Der Becq (Paradis), will prove problematic indeed, a real problem now that Alex is in debt for 50,000 Euros. For one thing, her fiance, Jonathan Alcott (Andrew Lincoln, "Human Traffic," "Love Actually"), seems perfect. He's Oxford educated, rich, handsome and runs a food bank that feeds 10 million children annually. The only 'flaw' Marc can find on the guy is that he owns a jet! He's as perfect as Alex's alter egos and there are only 10 days until their wedding. The only things Alex has to work with are that he knows Juliette likes George Michael, knows "Dirty Dancing" by heart, she has a 'dead' right shoulder, eats Roquefort for breakfast and was missing for a year when she was twenty. She will also be spending the five days prior to her wedding in Monaco alone. Alex pops up and announces her father (his actual client played by Jacques Frantz) has hired him to be her bodyguard. One of the reasons "Heartbreaker" is so much fun is how necessary Mélanie and Marc are as Alex's behind the scenes backup. When Juliette ditches Alex with a payoff, a carjacking is staged with Mélanie in black biker garb, working with Alex to make him seem heroic. Mélanie's a bit like "Get Smart's" Agent 13 - she pops everywhere - hotel receptionist, cleaner, waitress, pool guard - and is highly competent in all she does. Marc is usually the surveillance guy - until he's called upon to play an A/C repairman and makes it hilariously his own. When Juliette's 'missing year' buddy, promiscuous hard partier Sophie (Héléna Noguerra) arrives on the scene, Marc becomes a randy race car driver. These two are so good they get their own coda story during the end credit run. Duris, who trotted out his comic chops as the lead in 2007's "Molière," is almost too much fun here. He hits every note, from extreme physical comedy to hot sexiness. From spitting out a mouth of Roquefort to recreating Patrick Swayze's dance floor moves with the tiniest humorous flourish. The waiflike Paradis, she of the gap-toothed grin, looks more mature now, and essentially has the thankless straight man role, but the camera loves her and its easy to see why Alex would too. While the story rests on the age old device of a man being paid to romance a woman only to fall for her, "Heartbreaker's" storytellers are like plate spinners, balancing really, really funny bits with true romance. Leave it to the French to treat an old genre like a familiar, fine but playful wine while Hollywood churns out plonk.

This is a refreshing twist on the gigolo films of past years (“American Gigolo,” “Just a Gigolo,” “Deuce Bigelow: Male Gigolo”), making our hero, Alex, a man who selflessly offers his services to help families who are worried about their daughter/granddaughter…. It does not hurt that he must romance beautiful women, and on an expense account! The chronicle of his professional successes is told in a fast and funny montage of all the clients he has help split up, then the film gets to its meat and potatoes. Alex and his sister agree to take the contract offered by Juliette’s father (Jacques Franz) to break her engagement to Brit Jonathan (Andrew Lincoln). He has but a week to accomplish his mission and decides to pose as her bodyguard to get close to the pretty young woman. With only a week to do the job, he sets about learning all he can about Juliette – her likes and dislikes – and using it to fulfill the contract. Her love for the movie, “Dirty Dancing,” its sexy choreography and the music of the band Wham are fodder for Alex’s arsenal of weapon of marital destruction. Roman Duris anchors the film as the handsome, talented Alex. His business creed is “never break a heart” and, until Juliette, he has never violated that rule. Now, there may about to be a heart broken, but director Pascal Chaumeil (with a script by Laurent Zeitoun, Jeremy Doner and Yohan Gromb) keeps you guessing as to whose. Getting there is a load of fun, with good chemistry among the stars and their ensemble cast. Techs are first rate, especially veteran lenser Thierry Arbogast’s fine photography, and as frolicsome as the happily-ever-after story.