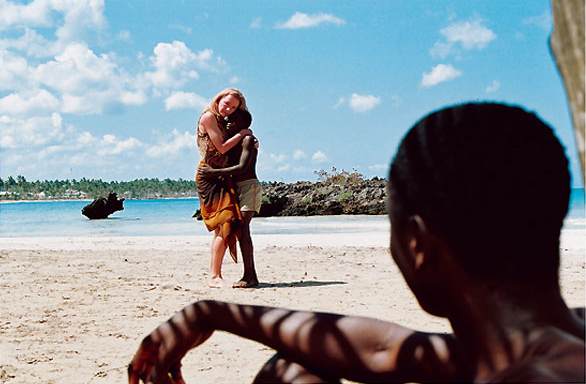 In a Haitian resort three single tourists, British Bostonian Ellen (Charlotte Rampling, "Swimming Pool"), shy Southerner Brenda (Karen Young, the female FBI agent of "The Sopranos") and laid back French Canadian Sue (Louise Portal, "The Barbarian Invasions"), become friends who indulge themselves in the young black men who make themselves available for sexual pleasure in exchange for gifts and tips. But the women and the men they meet discover that lurking beneath their fun and games are personal and political dangers, everything "Heading South."

Cowriter (with editor Robin Campillo, "Time Out")/director Laurent Cantet's ("Time Out") new film, whose title could also be taken as a sexual double entendre, broadens his scope from the societal stresses of the French workplace to colonialism. The nationalities of his three female protagonists are carefully chosen with the American inflicting the most harm on the country she is visiting. Ellen is the eldest, the cool Brit most familiar with her insular scene who more or less rules the roost. Brenda is the neediest, returning to Haiti for the second time. This time she's single, having divorced the man who took a fifteen year old Legba (Ménothy Cesar) beneath his wing while his wife secretly seduced the youth and experienced her first orgasm. Ellen watches Brenda's actions closely while maintaining an outward appearance of light hearted fun. Sue is the neutral territory between them. She tells the camera that 'here we all become different,' and yet she's the most naturally acclimatized to the environment, taking up with older fisherman Neptune (Wilfried Paul) with whom she appears to have a genuinely and mutually loving relationship. We never do quite know what's inside the contested Legba's head. Is he really fond of Ellen and Brenda or an opportunistic Gigolo? He shows some form of anger three times - when Brenda innocently(?) dances with the very young Legba wannabe Eddy (Jackenson Pierre Olmo Diaz), when Brenda dances again, wildly to a native beat and when Ellen pleads with him to leave the country with her (he's been disdainful of other women's offers of passports) when he has obviously drawn the attention of the country's corrupt 'Colonel.' It is in this sceen that Ellen reveals her hand. So, she's the liberal trying to both preserve a third world's culture and save one soul, while exploiting both whereas Brenda is the crass American grabbing what she wants. The results of Brenda's actions are foreshadowed twice. When she first spies Legba lying on the beach and approaches him, we wonder if she has found a dead body before he finally shifts in the sand. Later when she invites him to dinner in the resort's dining room, old head waiter Albert (Lys Ambroise) delivers a bitter soliloquy in the kitchen about his family's fights against American Colonialism in 1915 and how with the Americans 'everything they touch turns to garbage.' Brenda's reaction to Sue when Albert resists serving Legba at her table? "It's incredible how racist they can be....' Cantet's film is a heady drama with multiple layers of subtext against a beautiful, exotic landscape. Rampling and Young give all kinds of subtle shadings to their performances and their dual scenes of leaving the island, one broken-hearted and accompanied by 'old' Haiti, the other finding a new, horrific exhilaration, deliver a final, resounding punch.

In late 70’s Haiti’s Baby Doc Duval ruled the tiny country with a bloody iron fist. But, for three vacationing women – Boston-based French literature professor Ellen (Charlotte Rampling), an unsatisfied wife from Savannah, Brenda (Karen Young), and a good-natured Canadian factory worker, Sue (Louise Portal), all three on the other side of 40 – this is a little bit of paradise where they can fulfill their every carnal fantasy with the island’s plentiful supply of eager young men. Two of the women have their eye on one particularly hunky guy, Legba (Menothy Cesar), who is having his own doubts about being a boy toy stud in “Heading South.” This is a complex little film about the dynamics of relationships set in the volatile world of dictator-ruled Haiti. Rampling plays the worldly Ellen, a woman who has been coming there for years and is quite comfortable with laid-back nature of the place and the easy, no-strings-attached sex. Brenda, on the other hand, is rolled too tight as she breaks away from her unfulfilling marriage and immerses herself in the steamy world of previously forbidden love. Sue is just happy to have a man who likes her for herself, even if she has to pay him for that privilege. Of the three, Brenda is the most problematic and is the catalyst for deadly change that eventually comes to grip them. This is the third feature for helmer Laurent Cantet, who made a fascinating character study with “Time Out.” “Heading South” represents a very different direction for Cantet from his previous film and the result is satisfying in its own way. This is a clash of cultures film as Brenda, naively and selfishly, ruins a good thing enjoyed for a long time by her companions. Paradise is destroyed for the film’s players as the true nature of Haitian society overshadows the faux bliss that can be had by the women for just a few bucks. Heading South” is nicely crafted film with an intriguing paradise lost story. The acting is first rate, with Rampling the film’s diva, and all give their best. Young Menothy Cesar makes a striking debut as Legba, a man who slowly realizes that there is more to life than being wined and dined by vacationing middle-aged ladies. His turns into a tragic story in a place where tragedy is an everyday event.