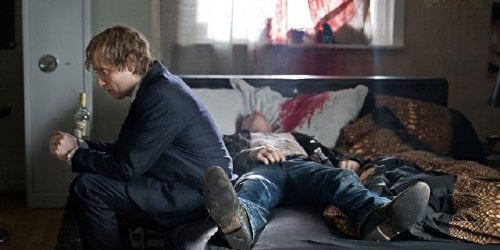 Roger Brown (Aksel Hennie) is a successful and well-paid corporate headhunter who recruits high-level executives for his company. But, at 5’6”, he is insecure about his beautiful wife Diana (Synnove Macody Lund) and showers her with expensive gifts, forcing Roger to go beyond the law to support the lifestyle he thinks his wife wants in “Headhunters.”

Roger Brown (Aksel Hennie, "A Somewhat Gentle Man") runs Oslo's most revered placement firm for high end executives, but he lives well beyond his means partly to compensate for his short stature but also to keep his stunning wife Diana (former model Synnøve Macody Lund) happily in the lap of luxury. So Roger moonlights as an art thief. When he's threatened by the attention shown Diana at the opening of her art gallery by handsome Dutchman Clas Greve (Nikolaj Coster-Waldau, "Nightwatch," HBO's 'Game of Thrones') and discovers that Greve owns a Nazi-appropriated Rubens, he decides to kill two birds with one stone, but he's underestimated his adversary - they're both a couple of "Headhunters." This blackly comic genre piece directed by Morten Tyldum ("Fallen Angels") from an adaptation (by Lars Gudmestad and Ulf Ryberg ("The Girl Who Kicked the Hornet's Nest")) of a Jo Nesbø novel (whose "The Snowman" is being developed by Martin Scorcese) is a real thrill ride, the type of intricate con game where you root for a criminal being cornered by a bigger threat. Aksel Hennie, who resembles a young, red-headed Christopher Walken, gets us in his corner by admitting his height phobia and we can see for ourselves his weakness around his wife. We know Roger's clever as, early on, he details to candidate Jeremias Lander (Kyrre Haugen Sydness) that reputation is what matters in a job search before playing him on an art sting, aided by his inside man at a local security firm, Ove Kikerud (Eivind Sander). Roger has no intention of recommending Lander for the CEO position at Pathfinder, but suggests it to Greve when he discovers the Dutchman was a member of TRACK elite forces and CEO of Hote, the GPS firm which is Pathfinder's competitor. But when Roger enters Greve's inherited apartment and finds Diana's cell phone in his rumpled bed, his game's thrown off, and when, after finding his right hand man dead in his trunk, disposing of his body only to realize he's still alive and then accidentally shooting him in the head in his forest cabin, he's working on adrenalized desperation. Then signs of Hote begin appearing in the most unexpected places. "Headhunters" is extreme noir with two potential femme fatales (Roger's height appropriate brunette mistress, Lotte (Julie Ølgaard) being the second), Tweedledee and Tweedledum cops, corporate intrigue, over the top escape plans involving out houses and tractors and an art theft expert (Reidar Sørensen) always on the periphery of the action. Underlying it all is Roger's relationship with his wife and her increasing frustration with remaining childless. That the two threads are satisfyingly tied together by film's end raises this one up a notch.

Norway is not a country known here for its film industry so it is a treat when you see a film like “Headhunters” and it knocks your socks off with its intelligent screenplay and skillful weaving its story lines. Roger, unknown to his wife, is way over his head in debt and needs to supplement income to pay for their lavish home, expensive accoutrements, jewelry, cars and clothes. In his dealings with executive level clients he makes a point of learning all he can about them, like “do they have any valuable paintings?” If the answer is yes, he puts events into motion to break in, steal the artwork, replace it with a forgery and fence the stolen goods in Sweden. This side business could become very lucrative when one client, Clas Greve (Nicolaj Coster-Waldau), tells Roger that he inherited a hitherto lost work by the artist Ruben worth 100 million Euros. However, this is far more than an art heist flick. That is just one story thread that “Headhunters” follows and this and the rest of the threads are all expertly woven to become a far more complex crime thriller – and a love story, too. It would be wrong to tell too much about this clever who-done-who tale. See it instead. Suffice it to say that it kept me guessing to the end and the twists and surprises are well-thought out. Acting is first rate, with a stellar turn by Aksel Hennie, and direction by Morten Tyldum is solid. I love seeing a terrific film from a place where you least expect it.