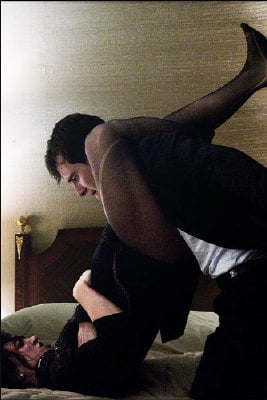 When Mallory Kane (Gina Carano, 'American Gladiator's' Crush), an agent contracted by the U.S. Government, is set up by the men who hired her, one a former lover, during a mission, her former colleagues better watch out as she goes "Haywire."

Director Steven Soderbergh has created a most unusual career for himself, dancing to his own drummer between ultra low budget art house films to studio produced fare with an indie flair to big commercial movies. Reteaming with his "The Limey" screenwriter Lem Dobbs ("Dark City," "The Score"), Soderbergh goes for the jugular with a genre flick that's a love letter to action. Angelina Jolie may be successful as a female action star, but Gina Carano delivers the real goods. The film's last line, as uttered by Rodrigo (Antonio Banderas, "The Skin I Live In"), is a testament to her able ferocity. Soderbergh and Dobbs drop us right into the action as a woman emerges from a snowy forest and enters a homey cafe. After a while, a hung over Aaron (Channing Tatum, "The Dilemma," "The Eagle") joins her. Mallory was expecting someone named Kenneth, but no, Kenneth sent this Aaron guy instead. Suddenly the pseudo-friendly facade drops and an astonished bystander, Scott (Michael Angarano, "Snow Angels," "The Forbidden Kingdom"), finds himself being piloted through a punishing police chase in his car. Scott becomes the audience stand-in as Mallory tells him how she's arrived at their present conundrum. At the 58 minute mark, we're caught up. There's a great cast getting their asses kicked here and Soderbergh manages to mix an unprofessional lead with everyone from Tatum, who keeps getting better, to Oscar winners like his former "Traffic" star Michael Douglas and man-of-the-moment Michael Fassbender ("X-Men: First Class," "Shame") and make it all seamless as he travels from Barcelona to Dublin to New Mexico. As usual, Soderbergh's shot his own film and it looks terrific, edgy and beautifully edited, never cutting away from Carano's moves, allowing us to see the brutally choreographed fight scenes. The sound design ensures we feel the power of ever smash, crack and uppercut. The climatic scene, staged at the home of Mallory's father, John Kane (Bill Paxton, HBO's 'Big Love'), is a tense bit of cat and mouse as she tries to confront Kenneth (Ewan McGregor, "The Ghost Writer"), her unmasked former lover. The house itself is a stunning bit of architecture in a unique setting which recalls "The Limey." With Carano, Soderbergh has created his own version of a Girl with a Tattoo without all the needless plot diversions, a Hanna who's all grown up and past fairy tales.