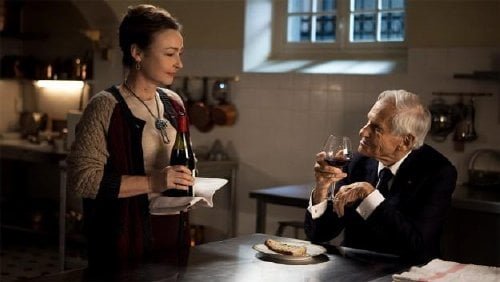 Hortense Laborie (Catherine Frot) is a successful and renowned chef and restaurateur in the Perigord region of France. She is surprised, and a bit overwhelmed, when she receives the nomination to be the President of the Republic’s, Francois Mitterand (Jean d’Ormesson), private chef. She reluctantly takes the position and does her best to provide her new boss with the best of traditional French “Haute Cuisine.”

When she's sought out in Perigord to become the French President's personal chef, Hortense Laborie (Catherine Frot, Lucas Belvaux's trilogy, "The Page Turner") is mystified. Even after being informed she was recommended by Joël Robuchon, she responds that yes, they once met and exchanged business cards. But Laborie is clearly on the President's (novelist, journalist and dean of the Académie Française, Jean d'Ormesson) wavelength in the kitchen, where her simple, traditional, regional foods are elevated to "Haute Cuisine." It's no surprise this French film chronicling the real life story of Danièle Delpeuch's time with François Mitterrand was picked up by the Weinstein Company for U.S. distribution as it plays just like one of Harvey's more middlebrow Miramax releases. This souffle of a film is kept aloft by a terrific performance from Frot, all no-nonsense in the kitchen, cleavering her way through bureaucracy and political pettiness, and by the succulently photographed (by Laurent Dailland, "The Concert") edible creations. The film actually begins at an Antarctic scientific station where an Australian documentary journalist (Arly Jover, "The Girl with the Dragon Tattoo") begins to follow Hortense around the kitchen. We are given a 'Four Years Earlier' title card and go back to France to find out how and why the chef ended up with such a remote cooking assignment. Laborie arrives at 55, rue du Faubourg Saint-Honoré, the Élysée Palace, not knowing what to expect. She's given all kinds of information on protocol, but nothing about food preferences, so, along with an assistant, Nicolas Bauvois (Arthur Dupont), whose very presence makes her chuckle, she prepares her first lunch - cabbage stuffed with salmon on 'Granny's Sauce.' The main kitchen is not only looking down their noses, but its head chef is furious that Hortense had the gall to come into his kitchen directly for supplies. Eventually Hortense meets the man she's cooking for and their 10 minute session goes on for 35 - they are kindred culinary spirits. But internal temperatures rise higher when he decides that she will prepare his annual family luncheon, discussions over its dessert becoming ego assuaging negotiations with his more official kitchen. Frot is terrific running her kitchen, tenderly preparing foods from recipes one can tell have been passed down for generations. A love of food is first and foremost here, Frot's conversations with d'Ormesson (playing the President as a twinkly-eyed, kindly senior, his greatest moment in the quiet enjoyment of a piece of truffle slathered bread with a glass of red wine) a shared celebration. But cowriter (with "Of Gods and Men's" Etienne Comar)/director Christian Vincent ("La séparation") soft pedals the internal political drama, making Laborie's move from Élysée to Antartica anti-climactic. "Haute Cuisine" is a literal smorgasborg for the eyes, a French trifle.

This is actually the true story of Daniele Delpeuch and how she was appointed as private chef to the President of France. Why the director/writer, Christian Vincent, and his co-scribe, Etienne Comar, changed her name to Hortense Laborie is a mystery. The film is based on Mme. Delpeuch’s telling of her two-year epicurean career as the personal chef to the most powerful man in France. “Haute Cuisine” is more than just a collection of beautifully prepared dishes for President Mitterand and his guests. Hortense Laborie has a back story and a forward story, too. Time is spent in showing her life as the respected chef and farm owner in provincial France and how she makes her food a social event, every day, the locals. The forward story, the aftermath of her years at Elysses Palace, has her living and cooking at a research station in Antarctica where she, once again, uses her cooking skills to please all the workers at the station. Though used in copious flash backs and flash forwards, these scenes are really bookends for her life working for Mitterand. In the presidential palace, Hortense is not given the free reign of menu, equipment and ingredients that she demands to do her job properly. Her stay at the presidential palace becomes less about creating wonderful dishes for the president and more about the battle between Hortense and the male chauvinists in charge of the Main Kitchen. The head chef, and his staff, treats Laborie as a prima donna and his underling and he does not have to listen to her. And, she is castigated for not staying within the budget that she was never given. She fights back in this male dominated bureaucracy but it is a losing battle for the exacting chef. The story shows, though, that Hortense Laborie is anything but a failure. Catherine Foote, as Hortense, and the outstanding production – lensing, set design, costume, locations – are the stars of this interesting and informative movie. It always amazes me how popular food movies have been over the many years. “Babette’s Feast,” “Big Night,” “Like Water for Chocolate,” “Tampopo” and many more come to mind and they have all been a pleasure to watch – even if you can neither smell nor taste the copious delicacies shown. “Haute Cuisine” is no exception.