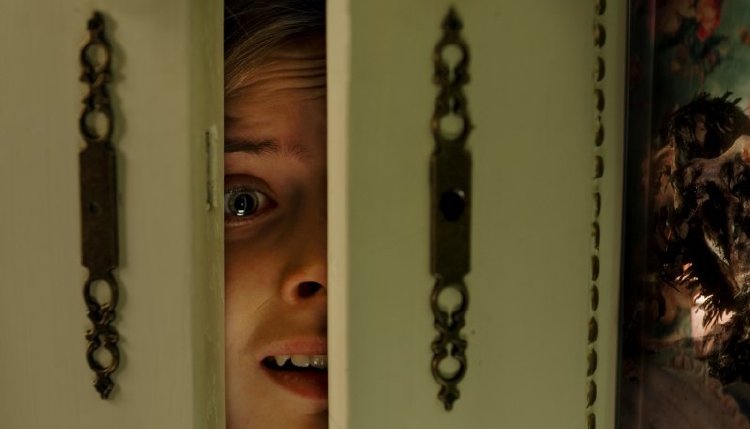 Twelve-year old gymnast Tinja (Siiri Solalinna) is frequently the subject of her mother’s (Sophia Heikkilä) vlog ‘Lovely Everyday Life,’ but one day, the perfect world mom has on display is upended by a disoriented raven whose attempts to find its way out of her living room leave a trail of broken glass.  Tinja, who’s wrapped the terrified bird in a cloth, is horrified when her mother wrings its neck.  Later, she will find the bird barely alive in the forest and while she puts it out of its misery, she takes the egg she finds alongside it home, keeping it warm in the bowels of a pink teddy bear.  All of the outsized expectations and insecurities weighing upon Tinja feed the id of what she’s “Hatching.”

Director Hanna Bergholm makes her feature debut symbolizing puberty’s challenges exacerbated by a domineering, perfectionist mom in a Finnish fairy tale straight out of Grimm.  Writer Ilja Rautsi (of such shorts as "Helsinki Mansplaining Massacre" and "Night of the Living Dicks") wittily associates such things as bulimia with a mother bird’s regurgitation of food for its young while offering a monstrous version of motherhood as good, protective example compared to the reality on display here.  Production designer Päivi Kettunen, whose pink and aqua color scheme boasts wallpaper splashed with garish roses, presents a feminine world with a dark underbelly, Tinja’s bedroom featuring a carved colored cupboard from which to escape mom’s glass encased nest.

Tinja’s entire existence revolves around an upcoming competition, one which her coach (Saija Lentonen) prepares her for with restraint while mom continually pushes, watching like a hawk.  We’re happy for the little girl when a girl her own age, Reetta (Ida Määttänen), moves in next door with her adorable dog, but when Reetta shows up in the gymnasium and proves a better gymnast we sense her days are numbered.  At home, Tinja’s cuckolded dad (Jani Volanen) is a kind but ineffective milquetoast and younger brother Matias (Oiva Ollila) is convinced she’s a monster.  Then Tinja returns home one day to find mom in a compromising position with handyman Tero (Reino Nordin), who will turn out to have a surprising influence on the course of events.

If at first you find the giant animatronic puppet which emerges from Tinja’s ever-growing egg a bit silly, stay with it as “Hatching” goes to some unexpected, even moving, places.  It is an assured debut which is more complex than its premise might suggest.