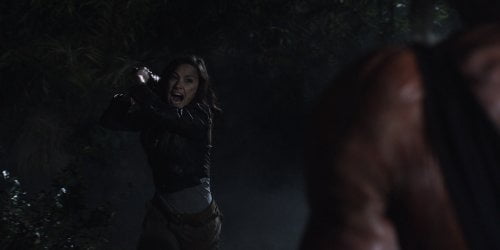 After losing her father and brother to the legendary Victor Crowley, Marybeth (Danielle Harris, "Hatchet," "Rob Zombie's Halloween") is plenty angry that Rev. Zombie (Tony Todd, "Candyman," "Hatchet") allowed a tour boat to go out to the cursed Honey Island swamp. Zombie himself wants to reclaim the land and his boat, so he agrees to round up a bunch of bounty hunters to hunt the ghost down in "Hatchet II."

"Hatchet" was heralded as a campy throwback to 1980's style slasher films and while it was indeed that, it wasn't anything special either. With the sequel, writer/director Adam Green ("Frozen") and his distributor, Dark Sky Films, are promoting the film's rating - or rather lack thereof - and the fact that a major theater chain is taking the unusual step of booking it without one. Is that reason enough to see the film? Only if you're interested in seeing a series of slayings by various manual and power tools. "Hatchet II" doesn't have a lick of wit. There's not much to be said about the acting either. Harris gives earnest line readings and Todd hits an all time low (his death, however, involves the sickest effects). After the extended and rather boring opening, in which Zombie insists Marybeth bring her last living relative, Uncle Bob ("Child's Play" director Tom Holland), or not be allowed to come at all, a group assemble at Zombie's New Orleans shop to hear how to earn $500, maybe even $5000. "Hatchet's" boat driver Parry Shen is now his former character's brother Justin, who makes a big deal out of serving the crowd Chips Ahoy. Product placement plain and simple or some kind of in joke hardly matters, the focus on store bought cookies is stale. Zombie retells the Crowley tale, a case of a dying wife's (Kathryn Fiore, "The Hottie & the Nottie") curse on her husband's pregnant lover. A quick boat ride later everyone couples off on the island. Redneck Cleatus (Ed Ackerman, "Frozen") thinks Crowley's just a kid's bogeyman tale and so he and his bud Chad (David Foy) are the first to go. Layton (AJ Bowen, "The Signal," "The House of the Devil") finds out foxy Avery (Alexis Peters) has the hots for him and forgets what happens to couples who have sex in horror films. The talkative Vernon (Colton Dunn) and taciturn John (Rick McCallum) seem to have a fighting chance, but who knew of the existence of eight foot chainsaws. Meanwhile Justin and his boss Zombie follow Marybeth Bob and Bob's buddy Trent (R.A. Mihailoff, "Texas Chainsaw Massacre 3") to the Crowley shack where Marybeth last saw her family's bodies. Zombie has a secret agenda to end the Crowley curse that includes sacrificing some of the remaining individuals. Everything goes just about exactly how you'd expect. Green lingers on his gore shots, but there's nothing very original about any of them (perhaps save the penultimate one). Two deaths are signalled by nothing more than buckets of fake blood being sloshed over a surface. Art direction consists of throwing Spanish moss over everything. Suspense is built by framing the victims so tightly the audience cannot see what's coming. Zombie classifies Crowley as a 'repeater,' a supernatural force destined to relive its own tragedy over and over again. God, I hope not. "Hatchet II" is a bore.