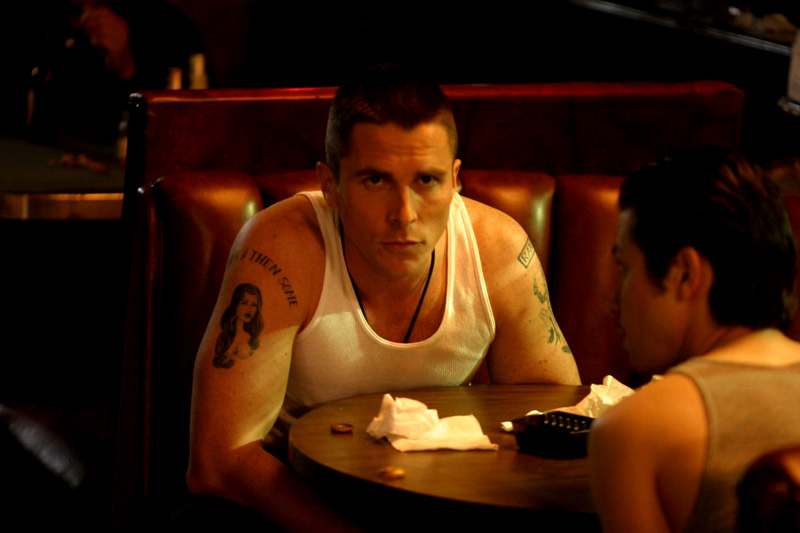 Former Army Ranger Jim Davis (Christian Bale, "Batman Returns," "The Prestige") and his hometown buddy Mike (a likable Freddy Rodríguez, "Poseidon," the upcoming "Bobby") join forces to hit the L.A. job market, but Jim's hard partying ways sidetrack Mike's best intentions. After escaping some tough street situations, it is when the two both land employment that they're in for real "Harsh Times."

"Training Day" scribe David Ayer makes his directorial debut with this similar tale of two men in moral conflict, but where the Oscar winning film had a suspenseful build, Ayer indulges in all things grim from the onset, making his film a bleak experience. Christian Bale, who also executive produced, has gone to the psycho well one too many times ("American Psycho," "The Mechanic") and this is the first role that makes his performance seems more calculated than natural. Our introduction to Jim shows his soft side, as he promises his poor Mexican girlfriend Marta (Tammy Trull) that he will return to marry her once he's gotten work. Back in L.A.it is clear that Mike's wife, Sylvia (Eva Longoria, TV's "Desperate Housewives," quite convincing), is not happy with Jim's presence, warning her husband that his job searching day should include no drinking. On their first stop, Jim is set off by his discovery that he is no longer a candidate for the LAPD. Proving Sylvia's instincts right on target, he immediately uncaps the brews and dumps Mike's resumes out the car window. They pay a visit to Jim's ex and when her current guy's posse shows up, Jim pulls a gun and holds them all up. Mike tries to resist Jim's bad influence, but no matter how rash his buddy acts, he keeps coming back for more. That night, Mike is rewarded with a six-pack by Sylvia for all the leads he's gotten. Trouble is, they're all phone calls faked by Jim. The two pay a visit to Darrell (Terry Crews, 2005's "The Longest Yard") to sell a gun Jim has acquired and Mike gets cocky, asking the friend to dupe his wife once again. Darrell obliges, but disapproves and sends them off to meet a stranger who gets his throat ripped out right as begins talking to them. Mike is horrified, but Jim seems stoked by the bloodshed. Mike's deception of Sylvia is uncovered and she throws him out. Mike is determined to make right and finds Jim preparing for an interview with Homeland Security. The next day, Mike lucks out when his interviewer turns out to be an old buddy. Jim bonds with Agent Richards (J.K. Simmons, "Spider-Man 2") who tells him the LAPD dropped him for psych tests, but that 'we're all a little nuts around here.' Jim's brutal war history makes him just the right candidate for assassinating Columbian drug lords. Mike, whose new job has gotten him back into Sylvia's good graces, falls right out again when he agrees to accompany Jim and their buddy Toussant (Chaka Forman) to Mexico to 'celebrate,' but Jim's broken dreams of a life with Marta set him off again and this time his behavior really scares his friend. Their trip back home makes "Babel's" Mexican maid's similar journey look like a joy ride. By the end of all this high adrenaline mayhem, one's left wondering just what Ayer's point is - that war turns men into sociopaths? That the almighty machismo leads to self defeat and destruction? Mike's loyalty knows no bounds, yet Ayer fails to establish the history of the friendship - Mike is not present in Jim's war time flashbacks. Davis is too clearly damaged (and Bale's performance too black and white - sensitive one second, murderous the next) to make Mike's consistency believable. Worse is Ayer's attempt at a redemptive, hopeful ending when clearly the last man standing cannot fail to be implicated in all manner of criminal behavior.