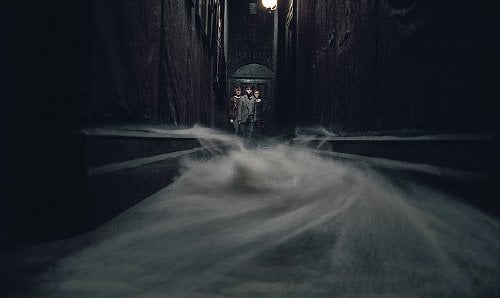 This year, as Hogwarts students prepare to begin a new term, Hermione Granger (Emma Watson) is tearfully wiping her Muggle parents' memory of her before joining others from the Order of the Phoenix to spirit Harry (Daniel Radcliffe) to safety from Deatheaters. When they arrive at the Weasley home, they'll find one of their own injured, have lost Harry's owl Hedwig, and, worst of all, discover the mission's leader, 'Mad-Eye' Moody (Brendon Gleeson), was killed. Deatheaters descend again at the wedding celebration of Bill Weasley and Fleur Delacour, so the trio of friends depart on their own to find and destroy the horcruxes which hold pieces of the Dark Lord's soul in "Harry Potter and the Deathly Hallows, Pt. 1."

Ever since British director David Yates ("Order of the Phoenix" and "Half-Blood Prince") came on board, Harry's world has grown darker and darker, childhood a further remnant of the past. In the bleakest film of the series yet, though, things are beginning to feel stretched out, as if we're on a holding pattern waiting for the big climax. Potter regular Steve Kloves hews closely to Rowling's text and it's a bit exhausting to realize we've spent two and a half hours with only one horcrux found and conquered. The series that has entertained a who's who of British acting talent welcomes newcomers Peter Mullan ("Children of Men") and Rhys Ifans ("Notting Hill," "Nanny McPhee Returns") to the gallery as Yaxley, the Top Law Officer of the Voldemort controlled Ministry, and Xenophilius Lovegood, Luna's dad who provides the meaning of the Deadly Hallows (in an animated sequence that looks like Tim Burton putting on a three dimensional shadow play), respectively. If Harry's gang felt like the resistance in "The Half-Blood Prince," here they've gone full hog, out in the elements, camping in a tent, assumed allies turning traitor. Rufus Scrimgeour (Bill Nighy) may have assured reporters all was well in the Ministry of Magic in the film's opening scene, but it is not long before he's been replaced by Pius Thicknesse (Guy Henry, HBO's 'Rome,' "Creation") and the Ministry's just stopped short of issuing swastika armbands. Harry Potter Wanted posters are everywhere and we've witnessed guarded pity in the eyes of Severus Snape (the series' greatest asset, Alan Rickman) at the table of Lord Voldemort (Ralph Fiennes) as Hogwarts' Muggles Studies teacher Charity Burbage (Carolyn Pickles) is tortured and killed. There's a lot of plot going on here with Polyjuice subterfuge, Nagini attacks, a Dumbledore biography, a Christmas trip back to Harry's birthplace, the Sword of Gryffindor and a nasty run-in with Bellatrix Lestrange (Helena Bonham Carter, feral), but the most rending element of the story is Ron Weasley's awful reaction to the Slytherin's Locket horcrux which results in a rift among the three. (Grint's makeup is really well done here, making him look the tortured soul, although Eduardo Serra's close-ups of the main three occasionally appear to lose focus.) The film's most effective scenes are the ones that accentuate loss, both carried emotionally by Radcliffe. As Hermione sits dejectedly after Ron's departure, Harry pulls her up, the radio playing, and he begins to dance with her. For a brief moment, they're smiling, weights lifted, then Hermione drags them back to reality. Near film's end there's a heart-breaking scene on the beach between Harry and Dobby, the freed elf who remains ever faithful to Harry. Maybe this is the year the Potter series' effects will be recognized as that CGI elf brought tears to my eyes. The final scene feels blasphemous and makes Voldemort's power seem more indomitable than ever. So, Yates accomplishes more in the quiet scenes here than the big flashy ones. That's a little disconcerting thinking ahead to "Pt. 2" but the director certainly knows how to pile on a sense of dread.