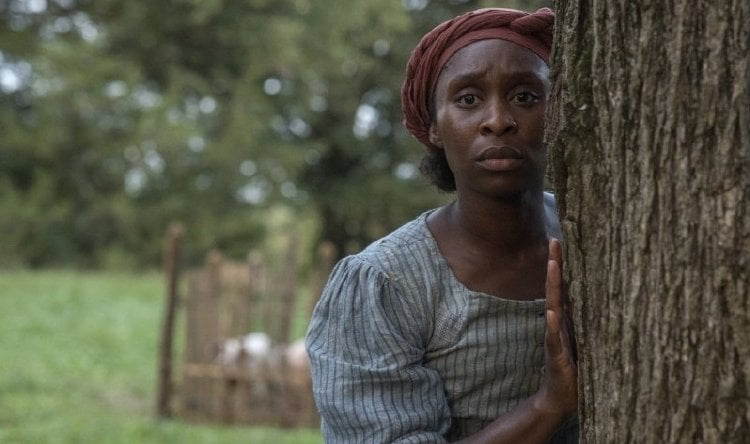 Harriet Tubman (Cynthia Erivo) was an escaped slave, abolitionist, political activist and freedom fighter for her enslaved brethren in the turbulent time leading to the American Civil War. How she went from servitude to a warrior of liberty is the subject of “Harriet.”

In 1849, Araminta “Minty” Ross (Cynthia Erivo, "Widows") listened to Reverend Green (Vondie Curtis-Hall) preach about how God says slaves should listen to the masters from the porch of the Brodess plantation where she had been born a slave. After her master dies, his son Gideon (Joe Alwyn, "The Favourite") puts her up for sale, thinking she’ll be trouble after appealing for the freedom her mother Rit (Vanessa Bell Calloway) was supposed to have received at the age of 45, both women being married to free men. Minty, who receives visions from God, runs 100 miles to freedom in Pennsylvania where abolitionist William Still ('Hamilton's' Leslie Odom Jr.) encourages her to take a new name. Minty chooses “Harriet.”

Most people know Harriet Tubman (Minty chose the last name of her husband, John Tubman (Zackary Momoh)) as the most famous conductor of the Underground Railroad, the network which helped escaped slaves to freedom. But fewer know that her exploits were so successful, southern plantation owners suspected a man named Moses or that she was a spy during the Civil War and led 150 Union soldiers at the Comahee River Raid where 750 slaves were freed. She was even a suffragette in her senior years. Cowriter (with "Ali's" Gregory Allen Howard)/director Kasi Lemmons ("Eve's Bayou") relays most of this in choppy bursts in her closing moments, instead focusing on the exploits which made her famous.

Lemmons fashions the mid-section of her film as an adventure tale, albeit one with life or death consequences, as Harriet returns to Brodess time and time again to rescue family members, only to be disappointed and divert to different missions. That she did so even after the Fugitive Slave Act was passed in 1850, allowing slave owners to chase escapees across state lines, is remarkable. She evaded slave hunter Bigger Long (Omar J. Dorsey), converting his lookout Walter (Henry Hunter Hall) to her cause, and the bridge where plantation owners gathered to corner her, her visions pointing out new paths.

The director, whose “Eve’s Bayou” featured a psychic and voodoo and whose “The Caveman’s Valentine” centered around a paranoid schizophrenic, now delves into an American hero whose success was attributed, at least in part, to spiritual visions, completing a kind of African American magical realism trilogy. Unfortunately, her latest film is more successful as history lesson than cinematic artistry. Star Erivo, who won a Tony for the Broadway revival of ‘A Color Purple’ and a Grammy for the cast album of same, has opportunity to sing here as well (as she did in her theatrical debut, “Bad Times at the El Royale”), but her performance, while capable, lacks range, her earnest expression rarely changing throughout.

More nuanced are the performances of Odom Jr., stopped short time and time again by the impossible feats of a woman he refuses to support in endeavors he finds foolhardy until he becomes a believer, and Alwyn, who shades his villainy with uncertainty, drawn to the woman he’s known since childhood yet convincing himself not to be with ugly, timeworn arguments. Also notable are Janelle Monáe ("Hidden Figures") as free entrepreneur Marie Buchanon and country music star Jennifer Nettles in her debut as Gideon’s mother, Eliza Brodess.

It is surprising that it has taken this long for Harriet Tubman’s story to be told on the big screen. While Lemmons’ film is educational, it is disappointing that movie never take spiritual flight, instead remaining conventionally earthbound.

Director and co-writer Kasi Lemmons (with co-scribe Gregory Allen Howard), takes on the formidable task of telling the story of a most remarkable lady in our brief history as a nation. And, I am glad the filmmakers did, since my knowledge of Tubman was cursory at best. (This is a real crime for someone who considers himself an avid amateur historian. I am in the process of remedying this lacking.)

This biography of Tubman follows straightforward biopic storytelling as it begins, in flashback, with Minty (Harriet’s slave name) being taken away from her family, wailing with grief and pain. Flash forward to 1849 and the master of the Maryland plantation sits to listen to his slaves sing gospel songs and their preacher’s, Reverend Green (Vondie Curtis-Hall), sermon.

The peaceful harmony of the Sunday is interrupted when freeman John Tubman (Zackary Momoh) asks for Minty’s release from her servitude. Of course, the slave owner refuses and Minty is punished for her disloyalty to her master. The proverbial last straw occurs and she makes the decision to escape with John. Things go wrong and John is beaten by Gideon Brodess (Joe Alwyn), the son of Minty’s owner, but reveals nothing about his wife.

Minty makes the dangerous and arduous journey – 100 miles on foot with no food and always in peril of being found by slave hunters and taken back to her “rightful” owner. Her determination and the occasional kindness of strangers bring her to Philadelphia and to William Still (Leslie Odom Jr.), an abolitionist and writer. He, in turn, connects now-Harriet Tubman to the secret Underground Railroad, an organization dedicated to freeing slaves in the South and spiriting them to freedom.

The story continues with Harriet becoming, with the help of her mentor and boarding house owner, Marie Buchanan (Jannelle Monae), educated and armed and with the mission to free her family. This mission turns from one to many and Tubman will lead some 70 slaves to freedom. Her exploits, as described by the filmmakers, are given steady shrift as she infiltrates “enemy lines” to relieve the slave owners of their “property.”

The heroic story shifts to a series of scenes and vignettes with Cynthia Erivo doing a solid job in embodying the feats and accomplishments – including heading a Union mission that led to the liberty of over 700 slaves – of Harriet Tubman.

Harriet Tubman’s life story is an inspirational biopic of a woman who put on the mantle of greatness in her fierce fight against slavery – and won. While the film’s story ends at the conclusion of the Civil War, Harriet went on fighting for human rights, women’s suffrage and caring for others until her death in 1913. And, to think, our current administration refuses to release the long time coming of her image on the $20 bill – a petty deed by petty people.

“Harriet” encompasses years of time and the many important and historic events so the many supporting cast members are not given the time to really flesh out their characters and their roles in those events, with some exceptions. “Harriet” belongs to its star, Erivo, who makes her mark as the iconic title character. The result is an earnestly told biography of a great woman in our history.