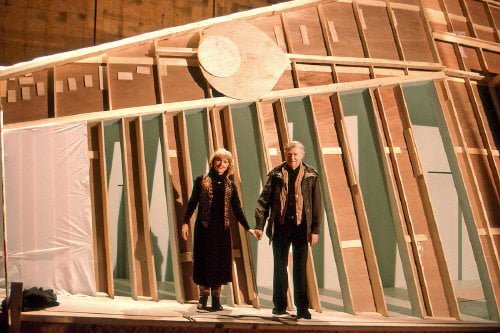 Harold and Lillian Michelson are not known in the lexicon of Hollywood notables. Not known, that is, to the average movie bear. But, to the people that actually make the movies we have loved, the dynamic duo was responsible for the success of the many films they worked on, together or separately. In an industry where marriages come and go, theirs is “Harold and Lillian: A Hollywood Love Story.”

When Harold Michelson returned from WWII, he thought his younger sister's 17 year-old friend Lillian a smarty pants, but it wasn't long before he proposed, asking her to move from Miami to California with him. Looking for an avenue for his drawing talent, Harold soon found work as a story board artist. Years later, Lillian began to volunteer at a Hollywood research library, their work informing each others for sixty years in "Harold and Lillian: A Hollywood Love Story." Writer/director Daniel Raim probably wasn't trying to dynamite the auteur theory in his beautifully constructed documentary, but seeing Harold's story boards for such films as "The Graduate" and "The Birds" is a startling reminder of just how many people contribute to the making of a film, even those, as in Michelson's case, who go uncredited. Raim's enchanting documentary is a treat for both film lovers and romantics. Someone should snap up the story of Harold and Lillian's marriage for a feature film. Heck the story boards are already done! Harold and Lillian Michelson may not be known to most film goers, but they have long been regarded as invaluable resources within Hollywood ("Shrek 2's" King Harold and Queen Lillian are an homage to them). One of the first anecdotes we hear comes from Mel Brooks, who tells of how Howard suggested putting actual white balls on the heads of his "Spaceballs" characters (Brooks had planned on regular helmets), one of the comedy's signature visual puns. His storyboards for the scene of John Huston falling against a giant flag on a skyscraper in "Winter Kills" is so striking, one wishes for their very own prints. Lillian theorizes (the two are shown separately in interviews, the lively Lillian still with us) that it was Harold's experiences in the glass nose of his WWII bomber planes that shaped his cinematic eye, and indeed we see that Harold didn't stop with camera angles, even noting which lens to use. It was decades before Harold's contributions were finally realized for what they were when Dalton Trumbo hired him as his production designer for 1971's "Johnny Got His Gun." He would later be Oscar nominated for "Star Trek: The Motion Picture." Lillian, too, was responsible for the historical and cultural accuracy of such films as "Who's Afraid of Virginia Woolf?," "Full Metal Jacket" and "Reds," although she says her favorite film to research was "Rosemary's Baby." When Lillian was asked about Jewish women's underwear in the 1890's, she solved the absence of reference material by hanging out at Canter's Deli to chat with older customers. In 1969, when Lelia Alexander, the woman Lillian volunteered for, was retiring, she suggested Lillian buy the library. Lillian couldn't afford to, but convinced Harold to borrow from his life insurance policy and moved to the American Film Institute. Later Francis Ford Coppola brought her and her reference works to his Zoetrope Studios, where she became its beating heart, her library its social hub (of the many famous people who hung out there Lillian's remembrance of Tom Waitts is the funniest - 'Everything that came out of him sounded like a police confession'). Her Rolodex is pictured, someone noting it was the size of a tire. Lillian would move twice more, first begging for space at Paramount after Zoetrope's bankruptcy, the being courted by Dreamworks Studios. Throughout their rich and rewarding professional lives was their marriage, Raim illustrating it in three phases with Harold's humorous chalk and ink drawings. Better even than those are the numerous handmade greeting cards Harold presented to Lillian over the years. Lillian shows us them gathered together in the personal book one of their children created, another priceless bit of creativity one wishes would be published commercially. But family life wasn't all sunshine. We hear about the sexism Lillian faced when 7 months pregnant while working for the phone company she was told she was 'an affront to the eye' and fired. Seeking treatment for her autistic son in the 1960's, she was told by doctors she was a 'refrigerator mom. She had her share of struggles with Harold as well, who went into a deep depression after shattering his leg when the set he was standing on collapsed. It was Lillian who drove through the alps in a snowstorm to get Harold's spirits up by getting him back to work (on "Cross of Iron"). Harold Michelson passed away in 2007, but Lillian's still going strong, albeit in a Hollywood retirement home. Daniel Raim's loving tribute is essential for any fan of cinema. Grade:

In the tradition of such pot toking comedies as Cheech and Chong’s “Up In Smoke” and “Nice Dreams” and the inimitable Jeff Spicoli (Sean Penn) in “Fast Times at Ridgemont High,” sophomore filmmaker Danny Leiner (“Dude, Where’s My Car?”) brings us a stoner road movie that is a goofy, funny comedy and takes the time and effort to inject some thoughtful social statements against racism, bigotry and intolerance. But, “Harold and Kumar” is, first and foremost, a ribald comedy and writers John Hurwitz and Hayden Schlossberg have devised a fast-paced yarn that holds a kinship to Martin Scorsese’s offbeat “After Midnight” as well as the aforementioned stoner flicks. The two leads are very different personalities with Harold uptight and neat and Kumar the irreverent, party-loving smart ass. Cho and Penn do a solid job anchoring the film as H&K decide to go in search of the illustrious title restaurant after smoking a big doobie and seeing a commercial for the luscious burgers. The quest is at hand. The journey our heroes take brings them to all parts of New Jersey as they score some more pot at Princeton, meet a pair of British coeds with a penchant for bathroom toilet duels, are harassed by a gang of skateboarding head bangers, face arrest, meet Neil Patrick Harris of “Doogie Howser, M.D.” fame and have the actor steal their car. And these bits are just the tip of the iceberg with a rabid raccoon, an escaped cheetah, a boil-covered tow truck driver and more wackiness thrown into the mix, too. Helmer Leiner and his scribes keep things moving along at a fast clip so if you don’t like a joke or gag you won’t have to wait long for the next. ”Harold and Kumar” also offers social commentary against racism, prejudice, justice and bigotry but never taking itself too seriously. The filmmakers keep you laughing and thinking at the same time. The cast supporting of “Harold and Kumar” is a wacky and eclectic collection of characters. David Krumholtz and Eddie Kaye Thomas are entertaining as H&K’s Jewish stoner neighbors, Goldstein and Rosenberg. Anthony Anderson is amusing as a disgruntled Burger Shack employee. Christopher Meloni gets to go way over the edge in gross out humor as tow trucker Freakshow. Gary Anthony Williams effectively plays a well-educated, pragmatic black philosopher used to the abuse of “The Man,” sharing a cell with Harold at one point during the long night. Harris gets good mileage playing himself in a not-so-flattering, but highly amusing, light. Pretty Paula Garces, as Maria, is the attractive object of desire for Harold and symbolizes his greatest challenge, during a night of many, by the end of the film. “Harry and Kumar Go to White Castle” may or may not become a comedy classic. Time will tell. Its goodhearted, good-natured let’s-get-high philosophy certainly has a lot to say about smoking pot and the silliness of its illegality – at one point H&K watch a “Marijuana Kills” public service commercial that is a stroke of satiric genius. It is nicely crafted combination of slapstick humor, satire and social statement that is sure to have, at the very least, a sizable cult following and hopefully beyond.