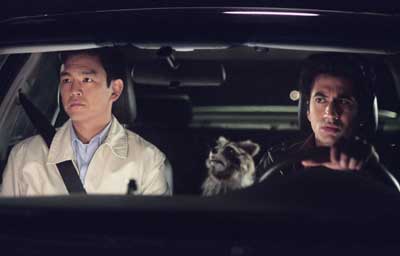 Harold (John Cho), a Korean-American investment analyst is smart but meek and easily pushed around. His roommate, Kumar (Kal Penn), is his polar opposite, blithely living off of his allowance from his wealthy physician father. Harold is loaded down with work by his smart assed colleagues and has to toil into the weekend. But, Kumar has scored some killer weed and plans to get baked with his best bud. When they come done with a serious case of the munchies, they set off on the great adventure of “Harold and Kumar Go to White Castle.”

'Just cuz you're hung like a moose doesn't mean you've gotta do porn.' -- Kumar Harold (John Cho, "American Pie") churns data for investment bankers who take advantage of his work ethic. Harold's roommate Kumar (Kal Penn, "Malibu's Most Wanted") spends his days evading his dad's attempts to get him into med school and convincing Harold to come home to smoke the killer weed he's scored. When Kumar's foxy machinations succeed, he and Harold must assuage their subsequent munchies, and so an epic evening begins when "Harold & Kumar Go to White Castle." Screenwriters Jon Hurwitz and Hayden Schlossberg took a simple premise and shaped it from their own personal experiences. The result is an epic pothead movie with laughs and smarts that relies on old standards like the farmer's daughter while kicking the stereotype right out from under their racially diverse characters. Both Harold and Kumar finish their journey with distinctly new outlooks on life without having lost any of their irreverent, goofy charm. A White Castle television commercial is the powerful suggestion that sends the Felix and Oscar-like roomies all over the state of New Jersey in a quest to satisfy their appetite. Along the way, they will encounter the same hip-hop bullies that haunt their neighborhood, two English girls with bad bathroom habits, an Asian student club and the girl who has a crush on Harold, a rabid raccoon, a surgical theater, the girl Harold has a crush on (Paula Garces, "Clockstoppers"), an escaped cheetah, a jail cell, an oozing Jesus freak, Neil Patrick Harris, and a gigantic stash of weed Kumar envisions spending the rest of his life with. And that's not all! Just when they've lost their resolve, they run into their across-the-hall neighbors Rosenberg and Goldstein (Eddie Kaye Thomas, "American Pie" and David Krumholtz, "Sidewalks of New York" - the screenwriters alter egos?), whose mere presence at a fast food joint inspires Harold to carry on. Director Danny Leiner ("Dude, Where's My Car?") packs a wealth of material into an economic running time without losing his audience or the occasional social commentary. This low budget effort features such baldly cheesy special effects that one can only smile at their cheerful execution. Cho and Penn are brilliantly cast both separately and as a duo - a "Harold & Kumar" series should be ensured. Cho is the straight guy with a gift for physical comedy and Penn is the laid back one with the outrageous lines - Chong to Cho's Cheech. Besides Harold's love interest, Maria, whose trip to Amsterdam at film's close will surely lure the boys into a sequel, Christopher Meloni's ("Wet Hot American Summer") Freakshow, a grotesque hillbilly with a hot wife, is the supporting character I most expect to see again. Neil Patrick Harris enjoys what must be the year's most gonzo extended cameo. "Harold & Kumar Go to White Castle" could be this year's dark horse indie smash. Unlike "My Big Fat Greek Wedding," this one's a blast.

In the tradition of such pot toking comedies as Cheech and Chong’s “Up In Smoke” and “Nice Dreams” and the inimitable Jeff Spicoli (Sean Penn) in “Fast Times at Ridgemont High,” sophomore filmmaker Danny Leiner (“Dude, Where’s My Car?”) brings us a stoner road movie that is a goofy, funny comedy and takes the time and effort to inject some thoughtful social statements against racism, bigotry and intolerance. But, “Harold and Kumar” is, first and foremost, a ribald comedy and writers John Hurwitz and Hayden Schlossberg have devised a fast-paced yarn that holds a kinship to Martin Scorsese’s offbeat “After Midnight” as well as the aforementioned stoner flicks. The two leads are very different personalities with Harold uptight and neat and Kumar the irreverent, party-loving smart ass. Cho and Penn do a solid job anchoring the film as H&K decide to go in search of the illustrious title restaurant after smoking a big doobie and seeing a commercial for the luscious burgers. The quest is at hand. The journey our heroes take brings them to all parts of New Jersey as they score some more pot at Princeton, meet a pair of British coeds with a penchant for bathroom toilet duels, are harassed by a gang of skateboarding head bangers, face arrest, meet Neil Patrick Harris of “Doogie Howser, M.D.” fame and have the actor steal their car. And these bits are just the tip of the iceberg with a rabid raccoon, an escaped cheetah, a boil-covered tow truck driver and more wackiness thrown into the mix, too. Helmer Leiner and his scribes keep things moving along at a fast clip so if you don’t like a joke or gag you won’t have to wait long for the next. ”Harold and Kumar” also offers social commentary against racism, prejudice, justice and bigotry but never taking itself too seriously. The filmmakers keep you laughing and thinking at the same time. The cast supporting of “Harold and Kumar” is a wacky and eclectic collection of characters. David Krumholtz and Eddie Kaye Thomas are entertaining as H&K’s Jewish stoner neighbors, Goldstein and Rosenberg. Anthony Anderson is amusing as a disgruntled Burger Shack employee. Christopher Meloni gets to go way over the edge in gross out humor as tow trucker Freakshow. Gary Anthony Williams effectively plays a well-educated, pragmatic black philosopher used to the abuse of “The Man,” sharing a cell with Harold at one point during the long night. Harris gets good mileage playing himself in a not-so-flattering, but highly amusing, light. Pretty Paula Garces, as Maria, is the attractive object of desire for Harold and symbolizes his greatest challenge, during a night of many, by the end of the film. “Harry and Kumar Go to White Castle” may or may not become a comedy classic. Time will tell. Its goodhearted, good-natured let’s-get-high philosophy certainly has a lot to say about smoking pot and the silliness of its illegality – at one point H&K watch a “Marijuana Kills” public service commercial that is a stroke of satiric genius. It is nicely crafted combination of slapstick humor, satire and social statement that is sure to have, at the very least, a sizable cult following and hopefully beyond.