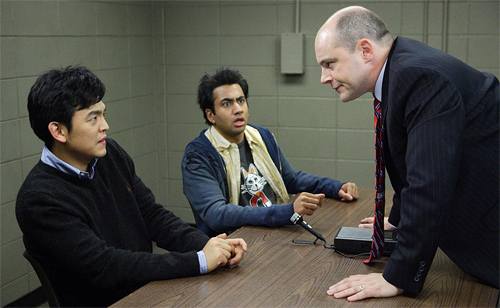 It is an hour or two after Harold (John Cho) professed his love to pretty Maria (Paula Garces) just as she heads for Amsterdam for her job. Kumar (Kal Penn) convinces his roomie and best bud that they should hop a plane and go after her. It seemed like a good plan until Kumar breaks out his homemade smokeless bong during the flight and the two are arrested as terrorists and shipped off to jail. The innocent pair’s protests go unheard and “Harold and Kumar Escape from Guantanamo Bay.”

The gang, from writer/directors to Jon Hurwitz and Hayden Schlossberg to stars John Cho and Kal Penn (and Neil Patrick Harris!), are back ably abetted by Rob Corddry ("Blades of Glory"), Roger Bart ("Hostel Part II") and ace George W. impersonator James Adomian. It may start off with some grossout gags, but once the opening credits have rolled, everything's as funny as the first, from the dual aural/visual joke of Kumar's bong being mistaken for a bomb to the one-eyed cyclops in Harold's bed. The action picks up where "White Castle" ended, yet adroitly parallels the former without feeling like a retread. Penn's oblivious yet calculating mission to always get either high or laid or both and Cho's simmering frustration with his friend's utter disregard of consequences make for a great teaming where one can always still feel the love. It's laugh out loud funny, and once the screenwriters figure out how to resolve's Patrick Harris's return, they still have Amsterdam.

The follow up to the popular “Harold and Kumar Go to White Castle” is a continuation, rather than a sequel, of the adventures of our two favorite stoners as they get themselves arrested because of Kumar’s indiscretion. Things start off a bit iffy as they prepare for their impromptu trip with Kumar grossing us out with rude, crude toilet humor. Once the boys are aboard their overseas flight, though, things take a turn and a combination of slapstick comedy and social commentary take hold. H&K are mistakenly taken for terrorists and, without due process of law, are sent to the infamous prison compound at Gitmo where they are threatened with sexual abuse by their unscrupulous jailers. Fortune is on their side and they effect a daring escape, hooking up with a family of Cubans seeking asylum in the US. From here on in it is a cat-and-mouse chase as the obsessively hardnosed, but none too bright, chief investigator from the Department of Homeland Security, Ron Fox (Rob Corddry). The boys’ mission is to clear their good names ASAP and through whatever means available. The ensuing road trip brings out all manner of good guys, who want to help H&K, and bad guys, who want to lock them up and throw away the key. There are three types of comedy films – the unfunny ones that you watch with a straight face (“Baby Mama,” for example), the mildly amusing ones that bring the occasional chuckle and a smile to your face, and the laugh out loud, hard and long, ones that epitomize the word “comedy.” “Harold and Kumar Escape from Guantanamo Bay” is the latter type. I can’t remember the last time I guffawed, frequently, over the course of a comedy flick as I did with this politically incorrect, socially aware laugher. I don’t want to give away any of the humorous interludes that “H&KEfGB” is wrought with from start to finish. Suffice it to say that this one is aimed at an audience that wants to have a good time and is thick skinned enough to not be offended by the often offensive (to some) humor that make up this not-a-sequel-to-but-a-continuation-of “Harold and Kumar Go to White Castle.” Because of this, Guantanamo Bay” has the same spirit of non-stop comedy as its predecessor and strikes the same chord in the hearts of those of us who appreciate a good laugh. The copious cast, including, again, Neil Patrick Harris as Neil Patrick Harris, do a great job in supporting our heroes.