Hard To Be a God 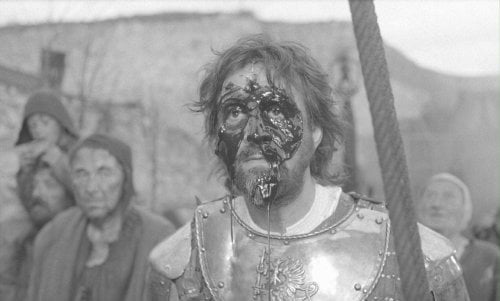 When a group of scientists visit the planet Arkanar, an Earth like planet in the midst of its own Dark Ages, they are meant to observe and not interfere while searching for one of their own. The man masquerading as Don Rumata (Leonid Yarmolnik, "Hipsters"), who is considered a god by the people he lives among, goes against the mandate by trying to help the intellectuals who are being persecuted by The Greys, but discovers it is "Hard to Be a God."

Professional photographer Jeff Kohlver (Patrick Wilson, "The Alamo," "The Phantom of the Opera") has no qualms flirting with fourteen year old Hayley Stark (Ellen Page, "Marion Bridge," "Wilby Wonderful," the upcoming "X3") in a chat room and can't believe his luck when she agrees to meet him at a coffee shop, but he's surprisingly reluctant when Hayley suggests he takes her to his home. Maybe Jeff's instincts are telling him he's about to be served some "Hard Candy." There's really only one compelling reason to see this film and that is the extraordinary performance by young Ellen Page, a breakout if ever there was one. This Canadian actress underscores the smart, confident teenager that Haley is with the perfect amount of girlish insecurity. She's got her sass down enough to be sexually provocative but her sexual inexperience makes her waver. And even yet, when Haley asks Jeff 'Does this face lie?' the answer is a resounding yes. That coy act goes out the window after the film's first third and Page reinvents Haley, turning her into a brutal and determined avenger. And as witty as some of television writer/producer Brian Nelson's dialogue remains, his plot becomes both obvious and implausible and director David Slade cannot relieve the tedium. Instead of letting us discover a possible hint of what is to come, Slade hammers his intentions in the film's early moments. After establishing Jeff's entirely inappropriate behavior via his typed responses on Haley's computer screen, the two meet cute in a coffee shop (Haley baits him with a chocolate kisser and some shy self-effacement). As they settle at a table - bang - the missing poster of a young woman jumps right out at us as it all but arrows in on Jeff's head. Then the conversation sets in and the thrust and parry is perfectly played, as mesmerizing as any nature documentary's predator honing in on unsuspecting prey. But once that prey is identified as Jeff there is only the question of his guilt to maintain suspense and it isn't quite enough. Some may squirm at Haley's chosen torture method, but it's all rather expected and clinical. Then there are the questions which begin to distract. How could a fourteen year old girl move a grown man, and so many times? Why wouldn't a neighbor delivering girl scout cookies (Sandra Oh, "Sideways") question an obviously distraught and injured teen? The beautifully framed climax only confounds us more. Why was Haley so intent on an investigation which she knew the answer to? Her explanation of how she found Jeff only begs the question as to how she found the source of her information. Nothing adds up and the film's early promise is squandered. Jo Willems' ("60 Seconds") beautifully composed 2:35:1 widescreen lensing was an artful choice for a film which is almost entirely a dialogue between two characters, emphasizing not only the actors' faces and spatial relationships but the clean, modern architecture of Jeff's home. "Hard Candy" comes too close to exploiting the very subject it seems to want to condemn, which makes for an emotionally numbing experience. Even so, Ellen Page's phenomenal work here stands on its own. If Lionsgate's campaigning won "Crash" a Best Picture Oscar, they should be gearing up now to nab her a nomination.

First time feature film director David Slade teams with novice screenwriter Brian Nelson in creating an intriguing story of a stalker, but with a twist. Hayley comes on to Jeff in a big way. He takes her home – on the pretext of listening to a bootleg MP3 – and offers her a glass of water. She declines, asking him if he ever heard of never taking a drink that you haven’t prepared yourself. She then proceeds to make them a couple of potent screwdrivers, then a couple more. Hayley convinces Jeff, against his better judgment, to shoot her picture in his studio and starts removing her clothes. He starts to protest but suddenly feels very sick. The room starts spinning and, as he passes out, Hayley reminds him that he should only drink something that he prepares himself. He wakes up to find himself securely bound to his office chair and Hayley, very different now, looming over him. His attempt to call for is met by a spray of bleach in his mouth. He stops shouting immediately. Hayley, it seems, has decided that Jeff is a pedophile and is responsible for another teen going missing. She goes through his portfolio, commenting that all of his subjects are young teenaged girls, accusing him of taking advantage of the naives sexually and maybe worse. Jeff protests and denies the accusations. He helplessly watches as Hayley prepares him for an operation that will stop his child molesting ways in the films most chilling sequence. She reminds him that she told Jeff that she is crazy when they first met. Now, he believes her. This two-person play (there are a couple of other actors, like Sandra Oh, who appear very briefly) benefits strongly from the performances of its principles. Ellen Page is, in a word, remarkable. Her character arcs from the coy, precocious Hayley, when she first meets Jeff, to a real monster bent on destroying him for his wicked ways. If this isn’t a calling card for future work for the young thespian it will be a major shame. Patrick Wilson is serviceable as the man who doth protest too much. The cat-and-mouse game between these two plays right to the end. This could have been a real dud if not for the two leads, especially Page. Cinematographer Jo Willems keeps the camera up close and personal as Hayley’s face (beautifully lighted, by the way) fills the screen. The action is handled with edgy hand-held camera work and adds to the tensions of the story. Hard Candy” will make the guys squirm in their seats for extended lengths of time as diminutive Hayley coldly goes about her business punishing Jeff for his crimes. It is, in a word, a hoot.