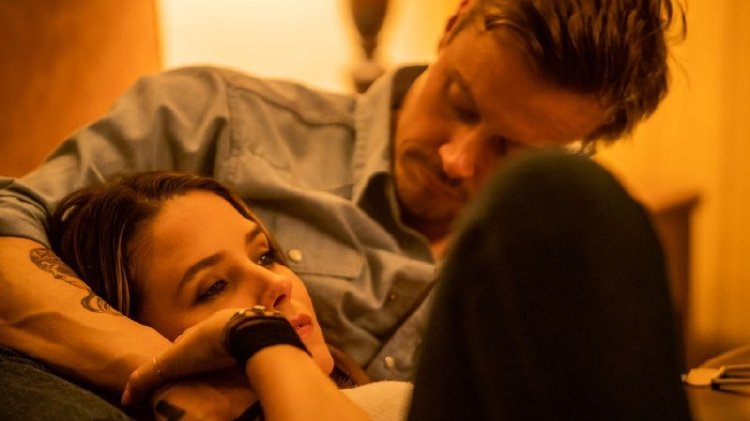 Jesse (Michael Dorman, 2020's "The Invisible Man") drives into Austin with his guitar and his record player, encamping at the Tumble Inn.  After checking out some local Help Wanted ads, he relies on pool hustling to make some cash.  After winning a few thousand at a local tournament, Jesse’s really ready to party and an ad promising ‘I’ll do anything but breakdance for you, darling’ catches his eye.  The accompanying phone number belongs to Carla (Sophia Bush, "False Positive"), the woman he’s loved all his life, but theirs is a “Hard Luck Love Song.”

Here’s one I can’t recall seeing before – an opening credit stating that the movie we’re about to watch is based on a song.  As it turns out, if that song is Todd Snider's 'Just Like Old Times,' you’re in for a real treat.  Cowriter (with Craig Ugoretz)/director Justin Corsbie grew up within Austin, TX’s music scene and his debut feature film is an ode to those hanging on in its underbelly.

Jesse may be a pool hustler, but he’s not a shark, something even those he hustles seem to realize.  We note right away he’s got a tendency to drink too much, but he’s got a smile for everyone and shares the little he has with those less fortunate.  It is not until he’s matched with Rollo (a grizzled, mohawked, tatted and golden toothed Dermot Mulroney) that we begin to fear for Jesse, Rollo aggressively burning him with a cigarette, his goons Bump (Randal Reeder, "Deadpool") and Pete (Zac Badasci) actively intimidating.  Jesse takes his few grand, outsmarts Bump in the boys’ room, then makes a surreptitious exit through the hall’s kitchen.

Once Clara’s agreed to drop by, Jesse makes another trip to see Benny (Taylor Gray), the local liquor store clerk who sells him cheap Mezcal above the counter and blow below it.  At first, Jesse and Clara’s reunion seems sweet, the two acting almost puppyish around one another, but a red flag goes up when Jesse claims that he now indulges in moderation and made his was of bills by writing songs for the ‘5th biggest singer in Branson.’  ‘He’s never gonna change,’ Clara tells herself in Jesse’s bathroom mirror, yet the party continues until a cop knocks on the door.

Officer Zach (Brian Sacca, "Buffaloed") is a most unusual policeman, one whose aggressive inspection of Jesse’s motel room followed by friendly outreach is very unnatural.  Then immediately following his exit, things turn sour between Clara and Jesse, Clara recounting his New Orleans exit then realizing he was so wasted he doesn’t even remember it.  It is here that the film most begins to resemble a typical C&W song and the good will Corsbie’s built begins to fade.  Fear not – whether a canny tactic on the director’s part or not, he’s saved the best for last with an act that brings all prior players together in a new one’s domain.  The off kilter ending is a doozy, a mixture of good will, violence, brotherhood and fun.  Corsbie caps off everything with Todd Snider performing his inspirational song live as the credits roll and we just have to laugh at all the events we’ve just seen packed into it.

Dorman creates such a likable loser one cannot help but root for his character, something Bush incorporates into Clara’s dubious attraction.  Mulroney’s never been this skuzzy and he makes it work.  Sacca takes a strange character and makes us believe.  Late breaking entries include RZA as Louis, Clara’s ‘boyfriend’ and Eric Roberts as genial bar owner Skip where Melora Walters works on Clara’s night off.  Corsbie gets loads of atmosphere from his humble locations, but best shows his talents with his ability to flip his hard luck tale into a celebration via a violent noir twist.  “Hard Luck Love Song” travels down a familiar path then comes out somewhere entirely different.  This one’s a winner.

Jesse (Michael Dorman) is an unemployed troubadour and part time pool hustler living out of cheap motels. He makes a killing from shooting pool one and invites his once paramour, Carla (Sophia Bush), to join him to drink, snort coke and pull an all-nighter in “Hard Luck Love Song.”

I was a bit nervous when the film opened with “Based on the song, “Just Like Old Times,” by Tom Snider. I have heard of films based on a book, an idea, a concept or a suggestion but never based on a country song – Tammy Wynette notwithstanding. The nervousness was soon quelled by the outstanding and charismatic performance by Michael Dorman as Jesse.

Jesse is a lovable rogue with a heart of gold made obvious early in the film when a homeless guy asks for spare change – this is after Jesse found a $100 bill on the street. He tells him “I’ll get back to you,” then heads to a liquor store. On his way back, he proves good on his word and gives the man a bottle of wine, a wad of cash and a hug. Talk about a heart of gold.

Our charming troubadour, though, does not know when a good thing is over and, when bad trouble looms, he finds it is too late to run, the thing he should have done. But, if Jesse behaved rationally, there would not be a story and the film would have been over in ten minutes. So, even though, in your head and heart, you want him to get way, you are secretly glad that he did not. That is how compelling Michael Dorman is as Jesse.

First time feature helmer Justin Corsbie does a fine job putting us in the middle of Jesse’s life, and gains our sympathy, even empathy, for the lovable songster. Dorman does a great job and is well backed by his supporting cast: Sophia Bush as his friend and lover; Dermot Mulroney, playing out of his romantic comedy-type, is the dangerous Rollo who crosses cues with Jesse and the reason our hero should be running away; Eric Roberts as the protective Skip; and, RZA as the shadowy and violent Louis.

I will remember, most of all, Michael Dorman’s Jesse.