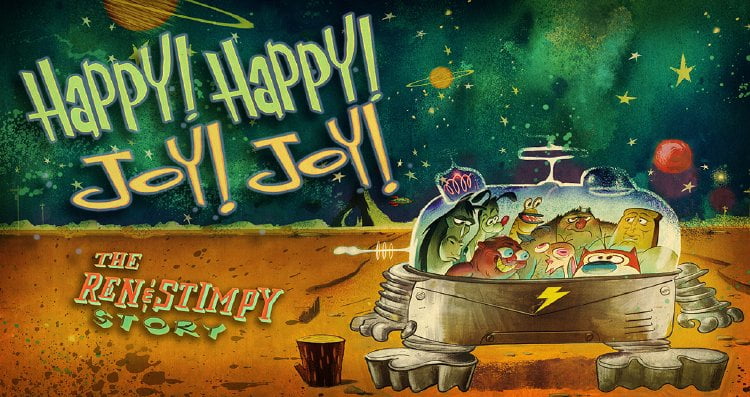 In 1991, Jon Kricfalusi unleashed the hilariously subversive animated tale of the friendship between a demented Chihuahua and a litter box-loving dim bulb cat on Nickelodeon, a channel geared toward children.  The hugely influential series became a big hit, but controversy followed it both on and off the airwaves.  Directors Ron Cicero and Kimo Easterwood look back in “Happy Happy Joy Joy: The Ren & Stimpy Story.”

One of the most devastating rise and fall stories of recent years, “Happy Happy Joy Joy” both celebrates the genius that was ‘Ren & Stimpy’ and explores the many personal failings of its creator, including the middle-aged cartoonist’s abuse and manipulation of two underage female fans, one of whom moved in with him two years after meeting him at the age of fourteen.  (This latter aspect of the story exploded after Cicero and Easterwood thought they had completed their documentary two years ago.)  For those who have never seen the original seasons – and make no mistake, once Kricfalusi was removed they were never the same – the snippets included here will be a revelation.  I myself was surprised how long and hard I laughed being reunited with Ren after all these years.

The filmmakers lay their groundwork within Kricfalusi’s home which is stuffed with vintage toys and collectibles from the ground breaking cartoons, like Bob Clampett’s classic Warner Bros. shorts, which he became obsessed with from the age of 4 or 5 (Kricfalusi tells the story of how he put together a flipbook as a kid and had a real Eureka moment – ‘It’s not magic, it’s science!’ – and that it was something he could do).  An old, portable television sits atop a shelf broadcasting much of the talking head commentary and ‘toon snippets we are about to see.

We are reminded that Kricfalusi formed his Spumco Studio during the conservative years of Bush 41, a time when broadcast cartoons were depressingly bland manufactured product, often simply marketing for merchandise.  He and his original (work and romantic) partner Lynn Naylor, described by their staff as his Ren to her Stimpy, had a genuine desire to create something new and to do it with real, hand drawn artistry.  But, after his pitch had been turned down all over Hollywood, it was Nickelodeon executive Vanessa Coffey who was drawn to two of the secondary characters in his portfolio, a Chihuahua inspired by a postcard of the same breed dressed in a sweater and clearly hating it, and a dumb, overfed cat.

Despite his demanding and abusive nature, Kricfalusi attracted the best young talent around, kids willing to work punishing hours in a roach-infested building described as having all the charm of an industrial bathroom.  Most are tongue-tied when asked to describe the show in a single sentence, although the phrase ‘unapologetic and disgusting’ is as valid as ‘heartwarming.’  It is fascinating to learn about the show’s development.  For example, while Peter Lorre may be an obvious inspiration for Ren, voiced by Kricfalusi himself when no voice actor did the little dog justice, who knew the hammier emoting of Kirk Douglas provided so many of his facial expressions?  And I’ll be damned, but when Billy West tells us he based Stimpy’s voice on The Three Stooges’ Larry Fine, I can no longer hear anything else.

The show’s success shocked everyone, the first to attain a 4.0 in cable history, all within its first four weeks.  But its success teamed with its creator was the reason for its downfall as well.  When twenty episodes were ordered for its second season, Kricfalusi spread himself too thin, becoming more abusive.  Lynn, who helped smooth over some of her partner’s bad behavior, left.  He became more monomaniacal, telling Coffey he’d take as much time and use as much money as he wanted, deadlines and budgets be damned.  Spumco cofounder Bob Camp was given control of the show.

Kricfalusi gives an extensive account of his own history and the man is decidedly odd, a retro 50’s version of the father he always aimed to please (possibly also the inspiration for his George Liquor character).  He’s clearly passionate, and despite the abuses he heaped on his staff he also fought Nickelodeon to include major up front props for contributors in the show’s opening credits.  He claims remorse for the girls who were ‘too young,’ yet one doesn’t get the impression he really understands how loathsome his behavior was.

Yet even when acknowledging the man’s better qualities, it is abundantly clear the ‘heartwarming’ aspect of ‘Ren & Stimpy’ was due to artistic collaboration, something we can see in samples of the show Kricfalusi resurrected in 2004.  The ‘Ren & Stimpy Adult Party Cartoon’ looks so vile it is no surprise it was pulled after three episodes.  “Happy Happy Joy Joy: The Ren & Stimpy Story” is a whiplash of a documentary, celebratory and damning in its fascinating history of an animation you will be amazed ever made it into children’s programming.

If you can remember back to 1991, you were very likely a fan of the still-fledgling, two year old animation series, “The Simpsons.” But, if you enjoyed the weird and wild and sought an alternative to Bart and Homer, maybe, then, you might have wanted to feel “Happy Happy Joy Joy: The Ren and Stimpy Story.”

I recall the rebellious glee I felt when I first saw animation renegade John Kricfalusi’s debut of “Ren and Stimpy: Stimpy’s Big Day.” And, if I remember correctly, my response was “WTF!!!??” and I meant that in a good way. But, I did not really have a clue about the show’s creator or the short and turbulent history of the groundbreaking and controversial animation series.

Co-directors Ron Cicero (who also penned the script) and Kimo Eastwood take a once favored TV show and delve into its birth – when Kricfalusi was hailed as the “New Walt Disney – and its problematic childhood to its rapid aging and sudden death. And, this all occurred in just two short years.

The filmmakers take you into hearts and minds of the many young artists and their creative process as they display their talents as seen through the many snippets from the 20-episode long, subversively funny buddy show. It is also a study of the rise and self-destruction of a true genius in animation - Kricfalusi was certainly a brilliant animator, but he was also a reckless egotist who had a chance to be a powerhouse in the animation field and blew it - royally.

Cicero and Eastwood’s assemble the many interviews of the animators and actors who worked with Kricfalusi and garners their varied opinions of the animator, which vary from genius to madman and, sometimes, both. The focus of the documentary, though, is on John, before, during and after the show’s brief run. Kricfalusi is given ample chance to respond to his interviewrs and does so candidly. They also dig into his personal life and a penchant for young women, very young women.

What comes out most in this eye-opening look at a genius is the actual fruits of his, and his team’s labors. He was a man, back then, of perfection. In one case, when the very first show was all wrapped up and ready for broadcast, he took all of the material and secluded himself away from prying studio eyes to make things better – and late. The filmmakers amply display examples of the auteur’s self destruction ways and you wonder how he got away with it.

“Happy Happy Joy Joy: The Ren and Stimpy Story” fits two very different bills of fare. For people like me, who wondered and watched with awe when the series deuted, it is a pleasure of nostalgic subversion. But, I think it may have a greater impact to younger audiences who were not around back then and I wonder what their reaction might be.