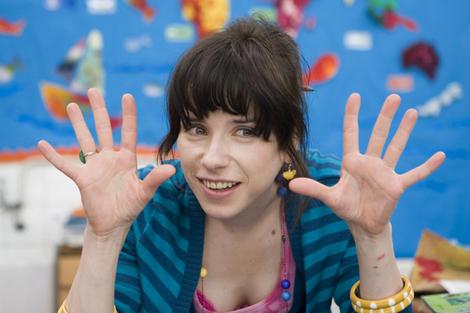 It takes a lot to bring elementary school teacher Poppy (Sally Hawkins, "All or Nothing," "Cassandra's Dream") down. When she discovers her bicycle has been stolen from a London street, she laughs, rues that she did not get to say goodbye, and decides to take driving lessons. One could say that Poppy is "Happy-Go-Lucky."

This is writer/director Mike Leigh's ("Secrets & Lies," "Vera Drake") best film since 1993's "Naked" and, in a sense, its photo negative twin - female centric as opposed to male, light vs. dark, optimistic vs. nihilistic and as much a breakout role for Hawkins as "Naked" was for Thewlis. "Happy-Go-Lucky's" Poppy may grate on some audience member's nerves, but even if her eternal bubbliness is over the top, the character's world view deserves some careful consideration. Poppy bops from one trial to the next, beginning with an antisocial bookseller she won't give up on and ending almost at the beginning when her Scott (Eddie Marsan, "Vera Drake," "Sixty-Six"), her driving instructor, turns out to be a sociopathic stalker with a violent temper. In between, Poppy faces wrenching her back during trampoline exercises (completely symbolic of character) and giggles under the hands of osteopath Ezra (Nonso Anozie, "Atonement"); weathers her older, pregnant sister's (Caroline Martin) bitter criticisms; has a scary/surreal/profound/touching encounter with a schizophrenic homeless man (Stanley Townsend, "The Nativity Story," "Flawless") and exhibits her utter compassion in her handling of Nicky (Jack MacGeachin), a child who has begun to bully others in her class. She's supported throughout by the roommate she adores, Zoe (Alexis Zegerman), who understands the innate goodness of her best friend. Leigh's famous improvisational style fits "Happy-Go-Lucky" to a tee as we follow Poppy through the events of every day life, although with Poppy, nothing is ever humdrum. Saturday night turns into Sunday morning as Poppy and her friends party at the disco, then Sunday itself becomes a day of arts and crafts as she and Zoe create bird costumes for their classes the next day. Poppy's enthusiasm and energy level makes her the perfect candidate as a teacher of eight-year olds, even though Scott, who prides himself in his teaching tools (the three-point "En-Ra-Ha" system of keeping one's eyes on the road, the "creep and peep" method of turning onto a main road), is appalled. Poppy and Scott represent the most extreme ranges of personality and Marsan's sputtering rage and racism, his controlling nature, are challenged and oddly attracted to the 'chaos' he sees in Poppy (not to mention her sexy, high-heeled boots). If this is Hawkins's breakout, and the actress so totally inhabits this character it is difficult to imagine Poppy in anyone else's hands, then the more experienced Marsan should at least receive a higher level of name recognition, his complex, tortured Scott following (in the U.S. at least), his meek, fearful dad of "Sixty-Six." These two actors are electric together, and Hawkins, who won the Silver Bear at Berlin for Best Actress, caps off a giddy performance with a level of solemn compassion which only deepens her character. Also notable are Karina Fernandez as a hysterically impassioned Flamenco instructor and Townsend as the big, lumbering tramp who ties his broken rambles together with a philosophical "You know?" Newcomer Samuel Roukin is interesting casting, his physical size a counterpoint to Hawkins petite frame, as social worker/love interest Tim. Leigh's regular cinematographer Dick Pope's ("The Illusionist") sharp and colorful visuals mirror Poppy's bright, optimistic outlook. Poppy's costuming is perfect for her character, the eclectic mix of colors and patterns a creative type would put together stylishly from flea markets and thrift shops accessorized daily with the same lace-patterned tights in a wide array of hues. "Happy-Go-Lucky" has been being described as a 'feel good' or 'charming, uplifting' film, but it is so much more than that - it is a character study of a woman who, on the surface, could be misjudged as annoying but ultimately whose compassion is a tonic for the soul. Leigh, who so often has delved into the misery of life, lets Hawkins loose and considers other options.