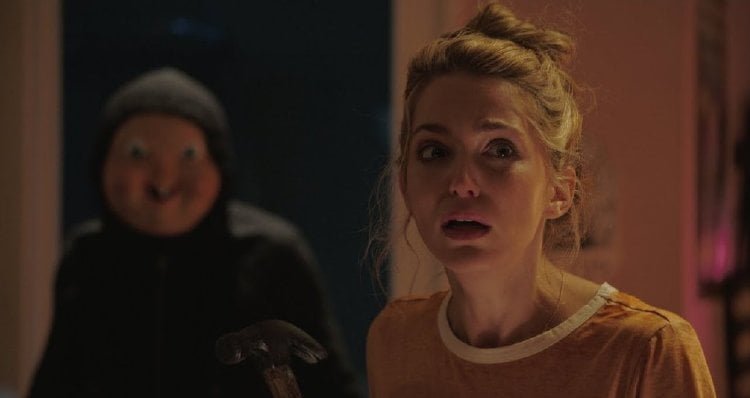 'Am I in a dorm room?' a hungover Tree (Jessica Rothe, "La La Land") asks the room's other occupant as she awakens to a birthday greeting from her Smartphone. Carter (Israel Broussard, "The Bling Ring") nervously attempts to help the unpleasant young woman, who takes some Tylenol, then leaves in a huff as his friend barges in. On her way to a party later that night, Tree's unnerved by a music box left in an underpass, but a stranger wearing the snaggle-toothed baby mask of the school mascot brandishing a knife is a lot more horrific. After the knife plunges into her, Tree awakens in Carter's room and realizes she is in a loop of her own "Happy Death Day."

Maybe screenwriter Scott Lobdell (TV's 'X-Men') didn't realize he was on the same track as this year's earlier release "Before I Fall," but it is uncanny how similar they are - sprinkle a little of the 1950 noir "D.O.A." on the latter and voila! Even the character arc is identical. Yet even if you've seen the earlier film, director Christopher Landon ("Scouts Guide to the Zombie Apocalypse") and his young cast keep us invested enough to unravel the mystery behind Tree's killer. Alas, it's rather easy to figure out, but Rothe and Broussard give us characters worth caring about. Everyone's familiar with the "Groundhog Day" routine. An unlikable character is forced to repeat the same day, figuring out their copious faults and how to become a better person along the way. And so sorority girl Tree follows a walk of shame where she encounters a student looking for signatures, sprinklers going on, a guy who falls over, a red car with its alarm going off and Tim (Caleb Spillyards), a guy she dated once whose texts she hasn't answered. She walks into her house where she's dinged by president Danielle (newcomer Rachel Matthews), then into her room where roommate Lori (Ruby Modine, TV's 'Shameless') says 'looks who's just rolled in' before presenting her with a homemade birthday cupcake. As her days repeat, events after this change shape, including the modes of her death. She'll run into Lori at the hospital, where she engages in an affair with their married professor, Dr. Gregory (Charles Aitken, TV's 'The Knick'). On her second turn at that September day, she'll avoid the underpass and get to the party, revealed as a surprise birthday party. On day three, she finally takes Carter into her confidence. He's surprisingly helpful, suggesting she should focus on discovering who her killer is just as suspects have begun to mount, many having reason to at least dislike her. Tree's also embarrassed to learn that Carter isn't the one night stand she'd assumed, the young man having protected her while incapacitated. The masked killer is eerie (shades of "The Strangers") and Tree's modes of escape lead her into more and more inventive traps. Character secrets are humorously revealed as Tree looks deeper. But the filmmakers' psychological explanation for Tree's initial nastiness doesn't hold water, nor do they offer any explanation for just why she's given so many opportunities to avoid her death. Handcuffs are utilized when convenient for the plot, but lacking when they are not. Pacing begins to drag early on, until a montage jump starts the film. "Happy Death Day" is a competent enough horror comedy that plays a bit better than it otherwise might have because of its young stars' commitment. Grade: