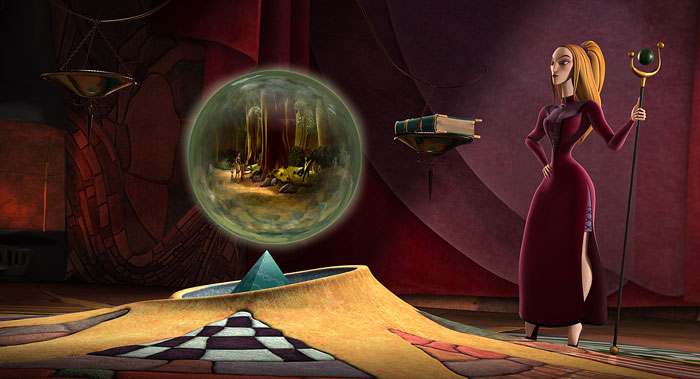 Ella, AKA Cinderella (voice of Sarah Michele Gellar), is all set to be swept off her feet by handsome (but vapid) Prince Humperdink (voice of Patrick Warburton) and live the proverbial happily ever after life. But, when her wicked stepmother, Frieda (voice of Sigourney Weaver), steals the Wise Wizard’s (voice of George Carlin) magical staff that keeps the fairy tale world in balance, Ella may well live “Happily N’Ever After.”

Think “Shrek Lite” when describing “Happily N’Ever After.” This latest revisionist look at the fairy tale genre has the Wise Wizard all set to go on a golf (?) vacation, leaving his not too bright assistants, Mambo (voice of Andy Dick) and Muck (voice of Wallace Shawn), in charge of his staff and the scales that maintain the balance of good and evil in Fairy Tale Land. Meanwhile, Cinderella eagerly awaits her invitation to the much anticipated royal ball where she is sure she will be the favored beauty for the narcissistic Prince H and, finally, get away from her not-very-nice step mom and her selfish, stupid stepsisters. But, the Wizard’s vacation throws a wrench into her plans when Frieda steals the magic staff. Suddenly, the delicate balance maintained in Fairy Tale Land is skewed toward evil and such stories as Rapunzel, Little Red Riding Hood, Jack and the Bean Stock and Rumplestiltskin take decidedly bad turns. Frieda, crazed with her new power, is bent on taking over the kingdom and uses the staff to summon ogres, wolves and a very mean giant to help her in her quest. Ella, with her best friend Rick (voice of Freddie Prinze Jr.), who is in love with the pretty princess wannabe, must gather the forces of good to put a stop to Frieda’s nefarious plans. Thus begins the battle between the good and the wicked. With film’s like “Shrek” and “Hoodwink’d” visiting the altered states of fairy tale stories, “Happily N’Ever After” covers no new ground - it even steals the maniacal laughter of Dr. Evil (of the “Austin Powers” franchise) to show the wickedness of Frieda (a device used way too often in “Happily…). This is an unoriginal work that marks time until it gets to its finale when the balance is restored to the world of fairy tales. While this latest variation on the Cinderella story is chock full of recognizable vocal talent, only Sigourney Weaver gives any life to her wicked stepmother. Stars Gellar and Prize are bland, at best, as Ella and Rick, not making it easy to really like their characters. Others, like Shawn and Dick, are serviceable at best. The animation techs that make up the characters and scenery of “Happily…” are mediocre with things like Frieda’s gang of hench-monsters being not very scary and with little personality. Bringing in other fairy tales into the equation, aside from showing how Frieda screws them up, adds little to this counter-Cinderella tale. The script, by Robert Moreland, is nothing new or different. The revisionist fairy tale is done better in “Shrek” and things like the Red Riding Hood variation is more fully done (but not much more enamoring) in “Hoodwink’d.” “Happily N’Ever After” is more appropriate as DVD fodder.