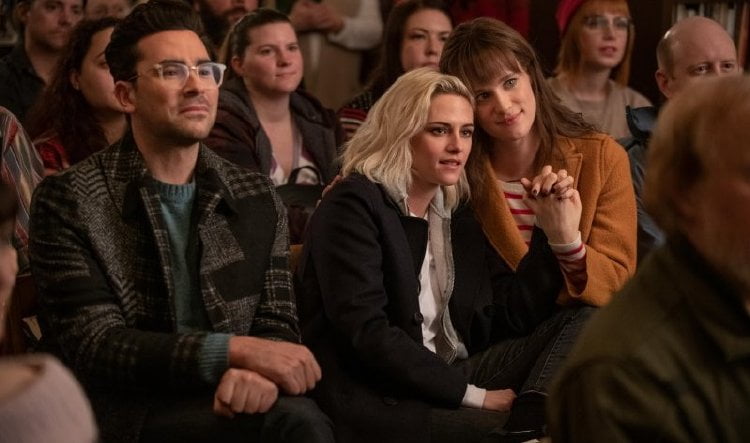 Noel nut Harper (Mackenzie Davis) is so thrilled with her live-in girlfriend Abby’s (Kristen Stewart) reception to Pittsburgh’s Christmas spectacle on Candy Cane Lane that she impulsively asks her to join her family’s intense holiday celebrations.  While Abby plans on asking Harper’s dad’s blessing for her hand in marriage, Harper frets over having lied about coming out to the family who thinks Abby is merely a roommate in “Happiest Season.”

Cowriter (with costar Mary Holland)/director Clea DuVall ("The Intervention") has made a very gay Christmas family dramedy, but the gay part is the only notable thing about it.  Take “La Cage aux Folles” (or its perhaps better known American remake “The Birdcage”) and slap some tinsel on it and you’ve got “Happiest Season,” minus most of the laughs.  From an inconvenient engagement to an uncomprehending parent in the political arena to drag queens, the inspiration is obvious, but the family dynamics Abby is thrown into are not only abusive, but somewhat contradictory.  Thankfully, Stewart and 'Schitt's Creek's' Dan Levy as her best friend John keep the holiday spirit alive with a welcome assist from Aubrey Plaza as Harper’s secret high school ex Riley.

After lining up John, who is appalled by her patriarchal proposal gambit, to take care of her animal clients for a few days (one of the film’s more amusing running gags), Abby and a now more reluctant Harper hit the road.  On the way Harper fesses up, but insists they continue and use the roommate ruse until she can explain immediately after the holidays.  They are greeted at the door of the sprawling Colonial by Tipper Caldwell (Mary Steenburgen), who immediately takes a picture for the Instagram feed she’s started as part of her councilman husband Ted’s (Victor Garber) potential mayoral campaign.  Harper is perturbed when mom places Abby alone in a basement room, assuring her she’ll have privacy even though the door doesn’t lock (and we know where this will go).

The ensuing days turn into a nightmare for Abby as Harper and her two sisters jostle for their parents’ approval.  Tipper is a pill who introduces her older Sloane (Alison Brie) and her husband Eric (Burl Moseley) as former high powered lawyers who now ‘make gift baskets.’  Sloane is humorless.  Younger daughter Jane (Mary Holland, "Greener Grass") is a chipper optimist who doesn’t seem to notice she’s mostly ignored.  Harper pays undue attention to the ex-boyfriend, Liam (Jake McDorman, 2018's 'Murphy Brown' reboot), her parents have invited to dinner, preferring to stay out drinking with him and a couple of girlfriends rather than return to the house with Abby.  Sloane sticks Abby with her two young kids at the mall who, in turn, slip a necklace into her bag so that she’s arrested for shoplifting.  Of course, the entire family believes she is guilty.  Who would want to spend time with any of these people?

The best part of the film features Abby licking her wounds with the supportive Riley, which, of course, grabs Harper’s attention.  John also arrives to rescue his friend and helps rescue the film as well.  When the showdown comes, it is an ugly public display and the blame is laid at the feet of the more relatable parent.  The film wraps with a lovely, heartening coda.

The production is fine, DuVall achieving distinct personalities for both Pittsburgh and Harper’s small town home.  The film’s editing can be rough.  The film also stars Sarayu Blue as family friend Carolyn and Ana Gasteyer as power broker Zelia.

“Happiest Season” is a schizophrenic movie that plays like a nastier “Meet the Parents” with Christmas sweaters.  It works whenever it ditches the Caldwells.

As I watched director-co-writer (with Mary Holland) Clea Duval’s rom-com, I had the distinct feeling that I was watching two different movies. One, about Harper and her dilemma of not coming out to her family, is a predictable and clichéd attempt at creating a “holiday movie.” Oh, yeah, at one point, in front of Abby, blurts out, “I am not a lesbian!” Happy Holidays.

This movie within a movie trots out nothing but two-dimensional (if that) characters, from mom (Mary Steenburgen) who is only interested in her festivity prep (and not much else), to dad (Victor Garber) a city councilor with aspirations to be mayor (and not much else), to elder daughter Sloane (Allison Brie) who wants to be the favorite (and not much else), to Jane (Mary Holland) the youngest and the only one who comes across as more than a stick figure. It all reminds me of “Home for the Holidays (1995)” and that is a memory best left forgotten.

Then, there is the other movie I was talking about. That one, with Kristen Stewart at its center, is entirely different. Abby is the other half of the Harper-Abby relationship, which, even before they arrive at the family manse, shows it is on rocky ground when Harper admits her family is completely unaware that she is gay. When they enter the family holiday fray, Abby is a mistrusted outsider and her plan to ask Harper’s dad for her hand is kyboshed.

Abby deals with the isolation imposed on her and the realization that Harper has been anything but honest with her. So, while Harper does the family stuff, she is left on her own and meets Riley (Aubrey Plaza), who has a secret past with Harper, which comes to light as things roll out.

Unfortunately, things do not go the way, me the viewer, wanted them to go. I was rooting for Abby the whole way through and this movie I enjoyed. Too bad I did not get more of that movie.