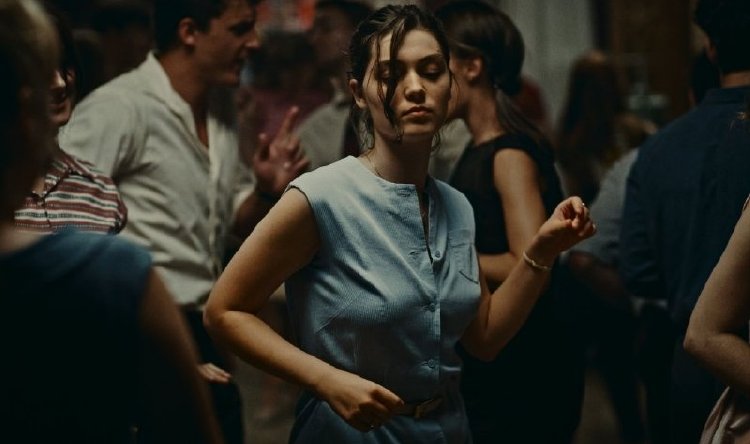 Anne Duchesne (Anamaria Vartolomei) is a university student hoping to leave her rural, working class background behind her when she learns she is pregnant.  It is 1963 and abortion and those who assist in its procurement are punishable with prison in France.  Anne’s desire for liberation has already labeled her as ‘sluttish’ by her prudish, moralizing female dorm mates and as the weeks pile up and her options dwindle, Anne’s friends and Professeur Bornec (Pio Marmaï, "The Trouble with You") wonder what is “Happening.”

Cowriter (with her "Losing It" partner Marcia Romano)/director Audrey Diwan adapts Annie Ernaux's novel for a sophomore feature which is the opposite of slump.  Using a 1.37:1 aspect ratio which keeps us intensely within Anne’s point of view, “Happening” envisions her circumstance as a claustrophobic, ever-tightening vise.  It is impossible to watch this horrifying, true story from 1963 France without contemplating the U.S. in 2022.

There have been a number of recent films about a woman’s right to choose from 2020’s “Never Rarely Sometimes Always” to Chad’s submission for this year’s International Feature Oscar, “Lingui, The Sacred Bonds.”  What makes “Happening” stand apart is not only Diwan’s unflinching look at the use of a sterilized, red hot knitting needle and abortionist’s ‘hook,’ but at all the attendant humiliations and abuses Anne’s condition heaps upon her.  Casting, too, plays a big part here, the unknown Anamaria Vartolomei, who resembles a young Mary Elizabeth Winstead, completely dominating the screen, her closely held emotions drawing us in.

We first know something is amiss via Anne’s inspection of her white cotton panties.  On a weekend home where she helps out at her parents’ bar, Anne visits Dr. Ravinsky (Fabrizio Rongione, "The Son of Joseph," "Two Days, One Night"), who informs her of her condition following  denials of sexual activity.  He’s clearly sympathetic, but immediately shuts down any talk of helping her.  A doctor near her university is even worse, appearing to relent from his initial condemnation, only to fool her with a prescription intended to bolster the fetus’s chance of survival.  The first friend she turns to, Jean (Kacey Mottet Klein, "Sister"), uses the situation to his advantage, figuring that if she’s no longer a virgin and already pregnant, surely she’ll be fine with having sex with him.  She visits the father, Maxime (Julien Frison), in Bordeaux, who had offered to help but clearly did nothing to back up his words and who criticizes her dark mood as being unappealing to his friends.  Anne turns to Gaspard, one of the local firemen (Cyril Metzger) who prey upon college girls at a local club, for some steamy sexual release.

When Anne finally tells her best friends, Hélène (Luàna Bajrami, "Portrait of a Lady on Fire") and Brigitte (Louise Orry-Diquéro), the latter promptly mounts her high horse, the latter privately commiserating later.  Tensions rise at home, Anne’s mother (Sandrine Bonnaire, "Vagabond") sensing a problem yet unable to divine it.  Anne will finally receive assistance, Jean emerging from shadows to point her towards Laëtitia (Alice de Lencquesaing, "Summer Hours") who quietly gives her the contact information that will lead her to Mme Rivière (Anna Mouglalis), but her problems are far from over.  At her most harrowing moment, assistance arrives from a most unlikely source (Louise Chevillotte, "Benedetta").

With its unheard ticking clock reverberating throughout, “Happening” is all the more impactful for its silence.  In 1963 France, a country known for its liberal sexual views, an unwed woman who engaged in pleasure had to traverse some very dark places to retain control of her destiny.  Anamaria Vartolomei becomes the face of any young woman with intellect and ambition facing oppression and Diwan’s powerful film should be required viewing for any man arrogant enough to think he has a say.

France, 1963 and Anne (Anamaria Vartolomei) is a talented young student with a promising career ahead of her, until the one thing that will destroy it happens – she gets pregnant. Because of French law, an abortion is illegal and her only recourse to try to save her once secure life could land her in jail in “Happening.”

What amazes me about this period tale, directed by Audrey Diwan and adapted from the same-named novel by Annie Ernaux, is that it lands on our shores smack in the middle of the current American far-right’s deliberate elimination of a woman’s right to choice over her own body. It is strange; the same woman being denied the right to choose to not have a baby by the government can, at the same time, become addicted to illegal fentanyl, no problem or interference by the government. Hypocrisy.

Anne, like many American woman now, was at a crossroads with just two choices – have the baby and ruin the life you once dreamed of or do something about it. Anne decides to do something about it and the story turns to the young woman making hard choices with no help from those around her. It is a story of desperation, fear, pain and a determined will.

Director Diwan, who co-wrote the screenplay with Marcia Romano and Anne Berest, gives her young star, Anamaria Vartolomei, plenty of running room to create a stunning character study about a strong-willed young woman who risks prison to try to control her own fate and body. It is a notable performance that should resonate with our own young woman who will soon face the same fate and the same risks. It is a sad day for America and it takes a period piece about a young French woman facing a horrific choice – because of men, and mostly white men at that – to bring the subject into a tight focus.