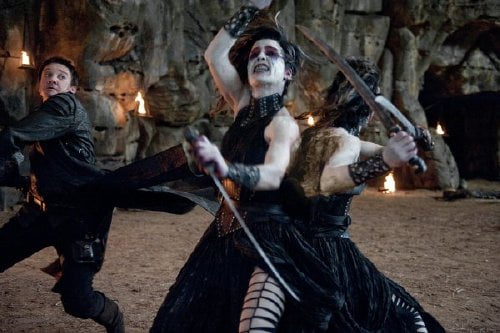 When they were too little to be left on their own, that's exactly what their father (Thomas Scharff) did, taking them deep into the woods in the dead of night with the full knowledge of their mother (Kathrin Kühnel). The brother and sister found a house made of candy where they were imprisoned by a vile witch whom they managed to push into the burning oven meant for them. Years later, the notorious duo have taken a job with Augsburg's Mayor Engleman (Rainer Bock, "Inglourious Basterds," "Barbara") to solve another crime of kidnapped children. They are "Hansel & Gretel: Witch Hunters."

Back when I was a kid, the local 2nd run movie theater used to show these bizarre Europudding fairy tale movies dubbed into English. Even at the age of six, I knew I was being fed 3rd rate product. Well imagine if an anachronistic take on the Grimm fairy tale had been made into a graphic novel and then fed back through that production pipeline, except with better known actors and effects and that just about adds up to this movie. Cowriter (with Dante Harper)/director Tommy Wirkola made his name in his native Finland with a decent little Nazi zombie movie, "Dead Snow," that lacked in original storytelling but showcased a knack for winking gore and fast pacing. With this outing, his strengths remain, but his weaknesses are more evident. If all you're looking for is some mindless, fast-paced entertainment, though, you could do a lot worse. The real story here is for these two kids to find out just why their parents abandoned them in the woods as small children - the 'present' story is just some mumblety-jumblety about the blood moon and twelve kidnapped kids that is never fully explained. The dialogue and some of the weaponry (Hansel carries an assault arm canon while Gretel's crossbow fires arrows at an automatic rate) are oddly anachronistic and attempts at fairy tale humor are too few to warrant inclusion. Hansel and Gretel's entrance into Augsburg - just in time to save Mina (Pihla Viitala) from being burned at the stake by the Sheriff (Peter Stormare, "Fargo") - misses a ripe opportunity for "Holy Grail" parody and the Sheriff is a bad guy dispatched too early. The character of Ben (Thomas Mann, "Project X," "Fun Size"), a nineteenth century autograph hound, is utterly superfluous, a bookmark for a sequel which already appears doomed. As the big, bad witch Muriel, Famke Janssen ("X-Men: The Last Stand") isn't as fearsome as her fx and makeup-laden alter ego. Witches here are said to be recognizable for the rot seen in skin, eyes and teeth and so they are portrayed with cracked faces and rabid looking contacts. They sound like a cross between Bushmen speaking click and Tuvan throat singers and move like stop motion and are current versions of villains from those movies of my childhood. Muriel's sidekicks, a Horned Witch (Ingrid Bolsø Berdal, "Chernobyl Diaries") and a Red Haired Witch (Joanna Kulig, "Elles"), have little personality, but a conjoined twin witch should have been given more screen time. Then there is Edward (Derek Mears, voice of Robin Atkin Downes, "Prometheus' computer), a fearsome troll-turned-teddy bear who is the least convincing effect in the film. He's like a woebegon Shrek with dead eyes. But there is some rip-roaring action and 3D-accented gore. Two standouts are a man caught in the spellbound branches of a tree to be pulled apart and some wire rigged to slice and dice flying witches (and propel chunks of them at the audience). As the titular characters, the Oscar-nominated Jeremy Renner ("The Bourne Legacy") and (Gemma Arterton, "Clash of the Titans") are decent action heroes with sibling balances (she's the mouthy brains, he's the shy brawn). "Hansel & Gretel: Witch Hunters" is a comic booky ride, but not enough fun to build a franchise on.