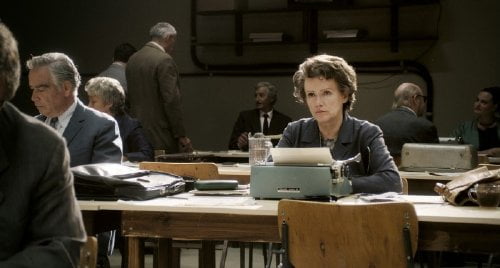 In 1961, a German Jewish philosopher was given the chance to cover the trial of Nazi war criminal Adolph Eichmann, the man responsible for the deportation of Jews from Germany, for The New Yorker magazine. Her husband, Heinrich Blüche (Axel Milberg), was fearful that returning to Germany would plunge her into depression, but there was no stopping "Hannah Arendt."

Cowriter (with Pam Katz)/director Margarethe von Trotta ("Rosenstrasse," "Vision") has made a powerful drama about ideas and Barbara Sukowa ("Vision") gives a complex performance of a woman who was attacked for 'defending' Eichmann, who continued a friendship with her first love and teacher, existentialist Martin Heidegger (Klaus Pohl), despite his having joined the Nazi Party ('There are some things that are bigger than one person'). Von Trotta captures a New York City of intellectuals living in dark apartments crammed with books in yellowing high rise buildings. In these offices, living rooms and studies, philosophical and political arguments are aired in intimate meetings and gatherings of friends and colleagues. In one dynamic scene, Hannah, Heinrich and their guests debate the controversial kidnapping of Eichmann in Buenos Aires by Israeli Mossad and Shin Bet agents who smuggled him out of the country to ensure a trial in Israel while American novelist Mary McCarty (Janet McTeer, "Albert Nobbs") looks on from a doorway, Hans Jonas (Ulrich Noethen, "Downfall") trying to translate th conversation for her. McCarthy's bemusement is an ironic foreshadowing of the American media's subsequent inability to understand Arendt's bold assessment of the 'banality of evil.' There are flashbacks to Hannah's youthful times with Heidegger and her subsequent meeting with him on her fact finding mission before heading to Jerusalem. We see her sitting alternately in the courtroom and in a press room, smoking furiously, during the trial. She's shocked to see the 'glass cage' ('to protect us from him?') and by her own initial assessment - 'He's not what I imagined at all...not spooky...He's a nobody.' Von Trotta uses black and white archival footage of Eichmann and the effect is a bit jarring - here might have been a real artistic reason to colorize film in order to blend the real with recreations. She also uses frequent cuts to Sukowa's face projecting a range of emotions and the effect is not unlike one of those Vanity Fair 'In Character: Actors Acting' pieces - she's engrossed, amused, perplexed. But it is hard not to be moved by witness testimony, shredding in its devastating simplicity, nor to be engrossed by Eichmann's own words, which Hannah accurately recaps as almost prideful in his accomplishments as an administrator. The film continues to amass power, though, and it reaches its pitch not during the trial, but with the aftermath of Arendt's reporting. She's vilified for her unpolitically correct assessment of Jewish leaders' cooperation with the Nazis as having been integral to their success and for stating she believed Eichmann's statement that he was not an anti-Semite, just following orders. Fifty years later, von Trotta's given us a reminder that what we now accept as proven and basic facts and concepts caused outrage in their time and that it required a great deal of bravery for Arendt to continue to express and defend her appraisal of how the Holocaust was systematically implemented. Sukowa gives a long, vibrant, impassioned speech at film's end, holding a class of German students rapt, but the college board tries to get rid of her. 'You ban books and accuse me of indecency?' - indeed.

Jewish-born philosopher Johanna “Hannah” Arendt (Barbara Sukowa) rejected the “philosopher” title given her and considered herself, instead, a political theorist. In 1961, she was commissioned by New Yorker magazine to cover the upcoming Adolph Eichmann war crimes trial in Jerusalem. She eventually wrote the promised series of articles and coined the term “the banality of evil.” Her story, during that turbulent time, is brought to the screen with “Hannah Arendt.” I was only familiar with Hannah Arendt and her work on a surface level before seeing “Hannah Arendt.” Director/co-writer Margarethe von Trotta (with co-scribe Pam Katz) brings one part of her life, probably her most famous, if not notorious, to the public view and the result is a gripping, well-produced, directed and acted biography that sets Hannah apart from the pack. Free-thinking Hannah, when she covers the Eichmann trial, realizes that the man was not a monster, but a willing pawn who gave up free thought to have others doing his thinking. His crime, his defense claimed, was “just obeying orders.” This revelation blew some people away but it was her big bomb that brought her to fame (or infamy, to some) – she stated, in her New Yorker articles, that the Jewish leadership in Germany before the war made deals with the Nazis, ostensibly to protect their flock. The statement earned Hannah death threats. Barbara Sukowa is powerful as the chain-smoking and independent Hannah and inhabits her character with passion. The whole film is steeped in the controversy she brought out with her radical views. Though born Jewish, Hannah tells her long time friend and colleague, Kurt Blumenfeld (Michael Degen), “I’ve never loved any people, why should I love the Jews.” This is attributed to her long affair with German philosopher Martin Heidegger (Klaus Pohl), a man who was sympathetic to the Nazis. I think it was because she had a strong will and intelligent mind. Hannah did not let others do the thinking for her and von Trotta does a fine job bringing her to life.