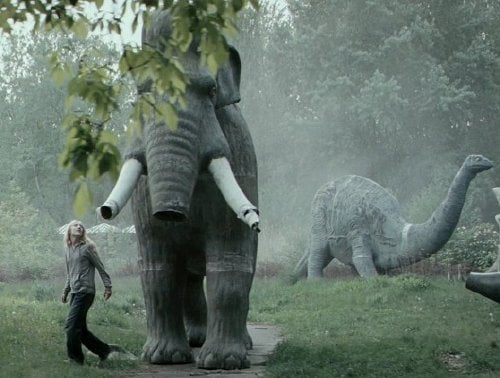 16-year old Hanna (Saoirse Ronan) was raised by her father, Eric (Eric Bana), in the stark and isolated countryside just below the Aortic Circle. He has trained her in the martial arts, weaponry, languages and survival skills, preparing her for a deadly mission of revenge in “Hanna.”

In the remote and snowy forests of Finland, a young girl (Saoirse Ronan, "The Lovely Bones") is taught intense survival skills by her father, Erik (Eric Bana, "Munich," "The Time Traveler's Wife"). She hunts reindeer, studies the stars, speaks innumerable languages and sleeps with one eye open. One day, she throws the switch on the box dad's told her will be the signal she's ready to go out into the world. He arranges to meet her at Grimm's House in Berlin, but first she has a mission with a dangerous CIA agent, Marissa Wiegler (Cate Blanchett), who is obsessed with terminating Erik and "Hanna." Director Joe Wright ("Pride & Prejudice," "The Soloist") takes one step further from his early period films with this stylish, head-tripping assassin thriller by way of Snow White. Seth Lochhead and David Farr's ingenious screenplay work a multitude of fairy tale allusions into their high tech sci-fi actioner which Wright and his production team weave in via costume, production design and even music. This ambitious film is thrilling, only stumbling with a drawn out denouement that still delights with its more literal fairy tale elements in eerie decay. At first it appears Hanna hasn't been too lucky on her journey. She's been caught and is confined in an antiseptic holding room in an underground bunker where a battery of physical and psychological tests are performed on her under the cool gaze of Wiegler. Wiegler struggles to convince her superiors that Erik is extremely dangerous and must be taken out. When Hanna demands to speak to her, a sympathetic substitute is sent in. Hanna's apparent need for mothering turns deadly and Wiegler is astonished when the girl manages to escape. She finds herself in a landscape that may as well be the moon but eventually comes across a teenaged girl and her brother. She delivers her scripted story and stows away on their van, which delivers her to a camel market in Morocco. Hanna is astonished by electricity and her first exposure to music - on a television set - furnished by the kindness of an elderly innkeeper who will not be repaid in same. Marissa has visited Isaacs (Tom Hollander, Wright's "Pride & Prejudice," "Into the Loop") at Berlin's Safari Club and engaged the bleached blond's services as a hit man. His target? Hanna. "Hanna" will invariably be compared to last year's "Kick Ass," which also featured a pint sized female with superior fighting skills, but Wright's film, despite its birth in fairy tale, is more grounded in reality, at least the covert ops, biological engineering kind. Wright exaggerates Ronan's fairness, her blue eyes like lasers set within a white face framed with long, white blond locks, and uses inventive camera trickery to complement her stylized movements. As the film's evil stepmother, Blanchett is similarly pale, with a sleek red bobbed wig, elegant, caped suits and forest green suede low-heeled pumps. The eye popping landscapes through which they travel gradually fade until everything rots in Berlin. Wright has also cannily used music to complement his visual fireworks (director of photography Alwin Küchler, "Morvern Callar," does astonishing work, including one of Wright's patented tracking shots). Hanna, whom Erik has never exposed to music, delights in finding it in exotic locales, but in Berlin it is only heard in the demented warble of a handicapped street person. The techno score by the Chemical Brothers may seem at odds with the story, but it perfectly complements Wright's rhythms and the story's modern surface. We only gradually learn Erik and Hanna's back story and they fight for their freedom, but let's just say that Marissa was covetous of Hanna's mother, whom she killed, that Erik is a wood cutter and that the first symbol of Hanna that we see is a white swan (animals are a constant throughout the film, with swans and wolves as bookends). Marissa also likes to engage in extreme dental hygiene while looking into a vast mirror. Oh, and Hanna is 'awoken' by a kiss from a surprising source. Saoirse Ronan, already Oscar nominated for Wright's second film, "Atonement," was terrifically good in last year's little seen "The Way Back." Here she navigates equally extreme climates, this time using martial art skills. She exudes an uncommon intelligence combined with a naive innocence and grounds the film with a mature confidence. Blanchett gives good villain and her Southern CIA operative is tinged with Germanic Grimm. Also fun is Hollander as the morally bereft and sexually perverse assassin. Olivia Williams ("The Ghost Writer") and Jason Flemyng ("Snatch," "Layer Cake") are amusingly at odds as the Boho intellectual English tourists whom Hanna travels with, but it is Jessica Barden ("Tamara Drewe") who steals scenes as Sophie, the teenaged girl obsessed with celebrity culture whom Hanna regards as an alien species yet whom she nonetheless befriends. Martin Wuttke, "Inglourious Basterds'" Hitler, is Knepfler, a sort of walking circus sideshow who is Hanna's contact at Grimm House. Amidst this freak show, Eric Bana represents grounded normality, even when killing border police in the nude. "Hanna" is an ingenious amalgamation of genres and styles dazzlingly directed by Wright, who has not forgotten that fairy tales are grim indeed.

Joe Wright, who directed the marvelous “Atonement (2007),” moves into the action genre with the tale of a young girl raised from birth to be a warrior and assassin. “Hanna” begins with the title character hunting a caribou across the stark, cold Finnish landscape. She makes the kill, using a bow and arrow, and begins to dress the animal when she hears a voice behind her saying, “You’re dead.” It is Eric and this begins a series of surprise attacks which the girl must win to prove she is ready for an as yet undisclosed mission. When Eric has taught Hanna all that he knows, she tells him that she is ready. He brings out a small electron box with a switch. He tells her that if she feels she is prepared for everything and anything to hit the button and she will set her mission in motion. Eric then packs up and leaves their remote cabin. She presses the switch and a signal is sent to the head of a clandestine US government agency, Marissa Weigler (Cate Blanchett), who dispatches a SWAT team to Finland to find and capture Hanna. The action ramps up when she kills two of her attackers, then gives herself up. She is shipped to a super security prison where Weigler watches the girl via a monitor. Hanna asks to see her captor and Weigler sends in an impersonator. This leads to a spectacular escape and the ensuing girl-hunt takes Hanna across the desert of Morocco and to the capitals of Europe. All the while she is dogged by Weigler’s chief henchman, Isaac (Tom Hollander), a whistling cold-blooded killer who takes great pleasure in doing his gruesome work. While I really like Saiorse Ronan as Hanna – she is a one-girl army and the young actress does a terrific job, combining acting skill and physical dexterity as she kicks ass – the story, and the other lead characters are flat and, with Weigler and Lewis, almost cartoonish. Cate Blanchet should have a moustache to twirl, she is such big meanie. Tom Hollander is almost comical as a sociopathic assassin. His constant whistling bugged me, too. Eric Bana is relegated to the background. If action is what you want, you get it in spades with “Hanna.” This is where the film really grabs your attention. There is also a blooming friendship when Hanna stows away in the RV of a British family vacationing in North Africa and she meets same age Sophie (a sparkling performance by Jessica Barden). But, Hanna’s secret life will cause a wedge to be driven between her and Sophie, her one chance to be a “normal” girl. “Hanna” is a bit confused. Is it an action flick, a coming of age film or a revenge movie? It tries to be everything to all people, with its young star (to attract to tweenies), copious mayhem (startling at times) and hard-boiled characters but only succeeds in part.