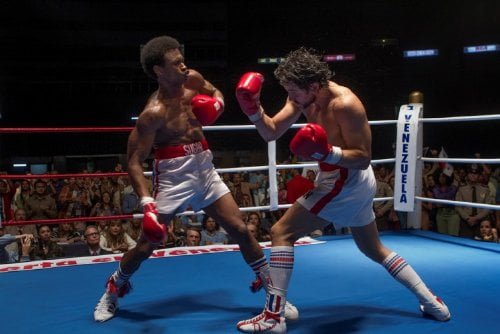 Roberto Duran (Edgar Ramirez) began his professional boxing career when just 16 years old. Since then, he went on to win 103 bouts with 16 losses and 70 knockouts and won four world championship belts in four different weight classes. His story, and longtime relationship with veteran trainer Ray Arcel (Robert De Niro), is told from his early days in the ring to his retirement from the fight game at age 50 in “Hands of Stone.”

In 1971, legendary boxing trainer Ray Arcel (Robert De Niro), who'd been forced to never again profit from boxing by the mob, saw Roberto Duran (Edgar Ramírez, "Carlos," "Joy") defeat Benny Huertas with a TKO at Madison Square Garden before the fight had barely begun. He called it 66 seconds that changed his life and offered to train the Panamanian fighter for a bid at championship for free. One year later, Duran won the lightweight championship belt from Ken Buchanan with his "Hands of Stone." Roberto Duran is most well known, of course, for his re-match with Sugar Ray Leonard (Usher) five months after taking Leonard's title (and perfect record) when he quit halfway through, allegedly muttering 'no más.' But writer/director Jonathan Jakubowicz ("Secuestro Express") is more interested in just what led Duran to do what he did, locating the source of his rage and patriotic pride. The film itself is dazzlingly shot and edited (cinematography by Miguel Ioann Littin Menz, editing by "Sin City's" Ethan Maniquis), the fast-paced linear story complemented by a whirlwind of artfully constructed flashbacks and montages that all add up for a heady mix. After Panamanian boxing entrepreneur Carlos Eleta (Rubén Blades) warns Arcel that the boxer is wild and undisciplined, Jakubowicz takes us back to 1964, the young boy (David Arosemena), the son of a U.S. Marine who left his family, witnessing a clash between the U.S. Military and Panamanians who wished to raise their flag. He runs with a gang of kids drawn to street hustler Chaflan (Óscar Jaenada, "The Shallows"), ducking soldiers to find mangoes to feed his family. Drawn to a local boxing gym, its owner Plomo (Pedro Perez, "Secuestro Express") shoos the kid away. Then he sees him fight. A training montage takes Duran from boyhood to adult. The uneducated but confident Duran spies pretty, blond schoolgirl Felicidad (Ana de Armas, "Knock Knock") and tries to chat her up. She's clearly intrigued, but wary, then impressed when she sees him picked up in a stretch limo. Duran's persistence pays off, aided by his sky rocketing career (here we get another montage, Duran's bouts interspersed with the arrival of his and Felicidad's children). Panamanian politics are always on Duran's mind, the injustices of his youth at the hands of American military his driving motivational factor in beating Leonard (the conflict continues as the U.S. and Panama battle over ownership the Canal). (He'll later be shocked when his father comes to meet him, learning he's a Mexican American and not the blond, blue-eyed standard he'd envisioned.) He gets under Leonard's skin by calling him a clown (Arcel stresses strategy and Duran had no use for Sugar Ray's 'dancing') and insulting his wife. Once Leonard figures out how he's been had, he demands the rematch Eleta agrees to, having gotten Duran's consent during a drunken party, that Duran, having gained forty pounds, isn't ready for. Arcel tries to delay it, arguing that Duran deserves some enjoyment (the boxer likes to party, opening his home to many, while also supporting those in need). Jakubowicz is less successful incorporating Arcel's story. While the trainer's meetings with mob boss Frankie Carbo (John Turturro, beautifully understated) are enthralling, danger mixed with mutual respect, a late reveal feels truncated into an afterthought. De Niro's performance, however, is another thing, the actor injecting humor with his Yiddish put downs, achieving stature through humility (he combs Duran's hair between rounds to psyche out his opponent). Ramírez is far too good looking as Duran, but he gets the fighter's pugnacious Panamanian pride and the boxer's physicality. The film's biggest surprise is Usher, who encapsulates Sugar Ray's charismatic personality and flashy style. The film also stars Ellen Barkin as Arcel's wife, "Eve's Bayou's" Jurnee Smollett-Bell as Sugar Ray's and Reg E. Cathey ("Nasty Baby," TV's 'Outcast') as Don King. The film was shot in Panama City (and New York), its crew almost entirely Latino. Boxing choreography carefully follows Duran's real fights, shots kept in close to the action, only pulling back to showcase Leonard's nimble moves around the ring. CGI was used to seamlessly recreate all the stadiums seen in the movie. "Hands of Stone" is a rush of a biopic, its fast pace distracting us from any inadequacies in story telling. Those who only remember Duran for his brazen taunting and unconventional quitting are in for a surprise. Grade:

Writer/director Jonathan Jakubowicz tells the life story of Roberto Duran, the only boxer since Jack Johnson (1878-1946) to have remained active in the ring during five decades. The film begins at Duran’s start as a tough street kid who, at an early age, worked hard to feed his family. This is where the extended montage of Roberto’s young life begins when he takes a job selling boxing newspapers in a Panamanian fight club. Once bitten by the boxing bug, young Roberto comes to the attention of Carlos Eleta (Ruben Blades), a fight manager who sees the potential in the boy who would later be known as “Manos de Piedra,” Spanish for the “Hands of Stone” film title. This is where we meet the grown up teen Roberto Duran as he begins his long career at the tender age of 16. Eventually, Carlos is able to coax retired trainer Ray Arcel to show Duran the ropes of pro boxing. Ray, years before, wanted to bring professional boxing to television, only to be strong-armed by the Mafia (here in the guise of mob kingpin Frankie Carbo (John Turturro). The mob, fearing losing control of the fight game, gives Arcel a choice: quit and earn nothing from boxing, or else. Ray takes the former deal. But, Ray’s forced retirement lasts until Carlos brings Roberto and the legendary trainer together. Seeing the young man’s talent and ability, Ray agrees to train Roberto gratis. This begins a trainer/boxer, surrogate father/son relationship that will last for years and through many of Duran’s 119 professional fights. The fight choreography, by the way, is some of the best in movies. During his controversial professional career, Duran used his punching power and volatile personality to move up the ranks Eventually, over years, he earns his way to challenge undefeated Welterweight champ, Sugar Ray Leonard (Usher Raymond), leading to the famous “Brawl in Montreal” in 1980. The film shows, prior to the Canadian bout, Duran publicly confronting his opponent, insulting Leonard and his wife, Sharon (Janelle Davidson), psyching Leonard out before the match. Although the film concentrates, mostly, on the fights between Duran and Leonard, the filmmakers give good shrift to the many other fights in his career – again, beautifully and brutally choreographed. While his relationship with Ray Arcel is the linchpin for Roberto’s fight career, his relationship – from flirting, to first kiss, to marriage and children – with Felicidad Inglesias (Ana de Armas) forms the story of his personal life. (Although, how Felicidad keeps her girlish figure after birthing many, many babies made me wonder.) The volatility of Duran’s personality defines, in the ring and out, the man and his life. I love a good boxing story, especially a biographical one, and “Hands of Stone” is up there in the pantheon of fight films. It is not “Raging Bull,” but, then, it is not trying to be. It is the story a flawed, talented and dedicated fighter, his losses and his victories.