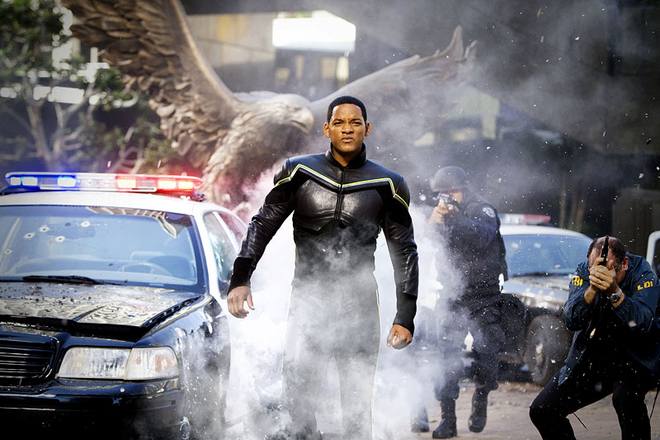 A kid tries to rouse a black man sleeping on a park bench surrounded by empty Jim Beam bottles. The disheveled young guy in a knit skull cap is annoyed. 'Bad guys!' the kid informs him, pointing towards a TV broadcasting from a shop window. The man sighs, but is drunkenly spurred into action, flying upwards and over the freeway. He's L.A.'s unlikeliest superhero - "Hancock."

Will Smith is back in his July 4th slot and "Hancock" gives him an opportunity to play. He's magnetic in the role, but the box office superstar should have pushed for a rewrite as "Hancock" only flies so far before degenerating into a lame and illogical "My Super Ex-Girlfriend." Hancock, who is usually soused, has a severe image problem with the public. His freeway escapade may have rounded up the perps but with a price tag of nine million in property destruction - Hancock doesn't seem to pay attention to the fact that if he flies through a highway sign the debris may cause police car pileups or that if he thwacks his perps's vehicle into buildings they may suffer structural damage. When he derails a train plucking a car caught at a crossroads from danger, a crowd gathers and berates him, but the saved passenger, Ray Embrey (Jason Bateman, "Smokin' Aces," "Juno"), just happens to be an idealistic PR guy who sees an opportunity. Ray takes Hancock home for dinner to meet his thrilled son Aaron (Jae Head, TV's "Friday Night Lights") and far less so wife Mary (Charlize Theron, "In the Valley of Elah," "Sleepwalking") who seems vaguely troubled by the visit. When a warrant is put out for Hancock's arrest, Ray seizes the chance to rehabilitate Hancock's image with the public and, in so doing, rid the young man of his anger. It's a good idea, and with Ray's instructions to wear a uniform (a sleek black jumpsuit emblazoned with the eagle Hancock had on his hat) and always thank the officers he assists, his first reappearance in public - pulled from jail at the Chief of Police's request - is a success, but when the Hancock, who is suffering from amnesia, tries to figure out who left him in a Miami hospital, the answer just happens to be staring him in the face. And this is where everything goes as awry as that train wreck. Vy Vincent Ngo, who wrote one episode of the TV series "The Hunger," based on the film "The Hunger" which this also shares plot points with, and Vince Gilligan ("Home Fries") were really onto something if they'd just stayed their original course but at some point they seem to have inserted their heads up their asses just like Hancock's signature threat (pretty amusing when finally carried out in prison). Without spilling the beans, let's just say that the twist they insert is too coincidental and a complete debacle in its execution. The film never recovers, even for an instant. Will Smith is great as the dude with the huge 'tude who almost reluctantly fights crime in a sloppy haze and Bateman is fine as the earnest and upbeat PR guy who wants to make the world a better place (he's introduced pitching a red heart symbol to affix to products which donate for the common good). The scripters take care to note that Hancock, who has the same powers as Superman excepting the X-Ray vision, could never really be jailed, but does so willingly. His awkward reentry to society is a delightful combination of the 'new' Hancock (he over thanks everyone) and the old (his method for taking out a hostage-threatening bank robber is unique, a violent gag). There are so many places this film could have gone - a celebrated Hancock becoming an egoist, a politician or both, perhaps. The film is average looking. Stunts and effects are well done, with Hancock's flying obviously influenced by his being under the influence. One wonders when director Peter Berg ("Friday Night Lights," "The Kingdom") realized his film wasn't working, because at a 92 minute running time, it's pretty apparent some salvation was attempted in the editing room. Scary to think it may have actually happened.