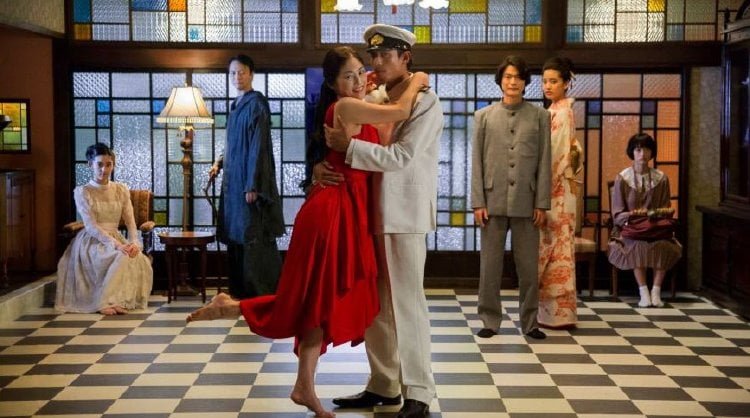 This nearly three hour epic about the wasted youth of Japan's war years adapted from Dan Kazuo’s 1937 novel is both a moving tribute and the type of phantasmagorical experience one would expect from the director of 1977's "Hausu." When Toshihiko attends Professor Yamauchi's (Takehiro Murata) class he will meet class clown Aso (Tokio Emoto), the monk-like Kira (Keishi Nagatsuka) and the dashing Ukai (Shinnosuke Mitsushima), all of whom are interconnected in friendship and romance with Mina and her two friends Akine (Hirona Yamazaki) and Chitose (Mugi Kadowaki). By film's end, few will still be with us.

The film opens in black and white academic ratio as Toshihiko considers throwing himself off Tategami Rock. The scene has a hyperreal quality, like a sped up silent (or Guy Maddin) film, with outsized acting to accompany it. Toshihiko wears a black cape, Obayashi's first use of the symbolic vampirism which suffuses his film. We will see Mina (who is afraid of mirrors!), clad in flowing white, race outside to cough up blood as (CGI) cherry blossoms fall. She is kissed by Keiko like a lover, homoeroticism another distinguishing element (later Toshihiko will enjoy a bareback horse ride along the beach with Ukai, both men nude). The fate of a puppy, Teru, is another potent foreshadowing.

Obayashi also references the sliding rice paper panels used in Japanese homes, sliding frames across the screen to get to the next scene, using panel cutouts as mini-movie frames (Mother Island, so named because of its breastlike appearance, 'floats' in the Pacific through one). When Toshihiko first enters Yamauchi's classroom, the academic ratio 'slides' into widescreen, color entering the frame. Obayashi and co-editor Hisaki Sanbongi use editing for other visual flourishes as well, zooming out of a scene that disappears within its black frame, zooming in to another. Later in the film, the fourteen floats of the Okunchi Festival are made otherworldly with green screened rear projection.

As the teenagers live their lives in the present, it is the older generation that reflects upon their upon mortality. Keiko notes that her husband Ryo (Taiyo Okamoto) suffered the same affliction as his sister, therefore his sacrifice on the Manchurian front was a way to make his life count, whereas a madame in a brothel Toshihiko visits cries for the waste of young life she sees in his future. Yamauchi exchanges his academic appearance for a military one, heading off to war ahead of his students. Although we never see a battlefield nor war's aftermath, there is something of Tolstoy's 'War and Peace' here as Obayashi balances initimate moments with epic ideas.

The film's title refers to a gift of red roses sent to Mina. When Keiko places the vase in her bedroom, Mina sees a petal fall as a splash of blood. Obayashi pulls out every tool in his filmmaker's kit to make "Hanagatami" a cinema experience like no other.