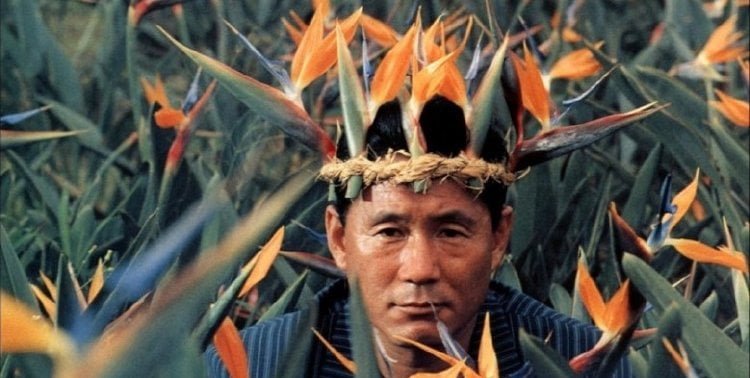 It has been 20 years since Takashi Kitano’s “Hana-bi (Fireworks)” land on our shore. The lyrical film about cops, yakuza and a rekindled love between a man and woman is being released on a remastered Blu-ray edition that is scant on extras but rich in story in “Hana-bi" on Blu-ray.

Winner of the Golden Lion at the 1997 Venice Film Festival, Takeshi Kitano's "Fireworks" explores themes of life and death via Takeshi's character of Nishi, a Tokyo detective. Nishi is facing the terminal illness of his wife, Miyuki (Kayoko Kishimoto, "Dolls"), after having already lost his young daughter. When his partner Horibe (Ren Ôsugi, "Audition") insists on taking over a stakeout so Nishi can visit his wife in the hospital, Horibe is shot by the Yakuza hitman they were waiting for and is paralyzed. Ridden with guilt, Nishi quits the police force, robs a bank, and takes his wife on what could be their last vacation together. Beat Takeshi is a Japanese phenomenon - when he made this film, he was appearing in seven weekly TV series, had authored fifty-five books and appeared in many films (most notably for U.S. audiences, he was the Japanese Sgt. that said the line "Merry Christmas, Mr. Lawrence" in that film.) While this was Beat Takeshi's first film to achieve U.S. release, it's his seventh feature. "Fireworks" is the product of a unique vision, which breaks cinematic rules to create new ones. The film is oddly structured, not at all linear in its storytelling, but the flashing backwards and forwards work to underscore Nishi's frame of mind (Takeshi also edited this film - fourteen times). I found "Fireworks" to be primarily about loss and was terribly moved by it, particularly by the character of Horibe. When Horibe is paralyzed, his wife and young daughter leave him, just as Nishi's daughter has and wife is about to. The symbols of a young girl haunt the film, from images in the paintings Horibe takes up (painted by Takeshi), to the small shoes Nishi finds on the doorstep of his apartment building, to the innocence and childlike games of Nishi's wife, to the final scene where a young girl flies a kite on the beach. Nishi is an intense character who's fiercely protective of those he cares for. It's Nishi who sends art supplies (including a beret in a wistful touch) to Horibe and who sends money to the widow of another colleague slain in the line of duty. Nishi rarely speaks, but can make his wife laugh with a few words. He can also pump bullets into a corpse he's created and take out a man's eye with a chopstick. He's a multi-decorated detective who takes money from the very Yakuza he fights in his job and robs a bank when he leaves his job. Why? Maybe because we're presented with a rather grim look at Japanese society where the widow of a slain police officer is barely scraping by. Nishi and his wife tellingly and ironically find humor in the small blows life deals them. "Fireworks" is an intensely visual film. In one glorious three minute scene, we see the artist in Horibe come alive when he's moved to tears by the sight of an abundance of flowers on display outside a shop. Each different flower becomes incorporated into an animal in the paintings forming in Horibe's mind. There is also a lot of humor in Kitano's work, often silent observations reminiscent of Jacques Tati. Grade: