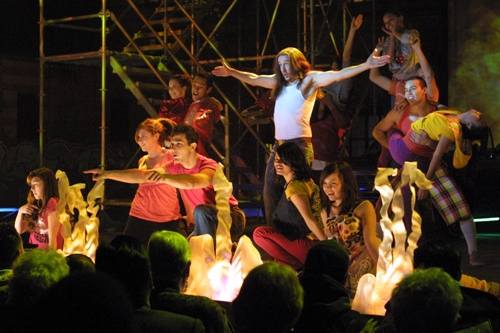 Dana Marschz (Steve Coogan, "24 Hour Party People," "A Cock and Bull Story") believes that 'to act is to breathe the poet's breath' but after being kicked around Hollywood for years, he goes to that place where dreams die - Tucson, Arizona. As a drama teacher with only two students whose department is on the verge of extinction, Dana is overwhelmed one day when his class explodes by a factor of ten. The school's Latinos have had their other options revoked and Dana's class is a last resort hangout. Until, that is, Dana fires up their enthusiasm and the town's ire with his own original play - "Hamlet 2."

TV spots for "Hamlet 2" are accentuating the writing talent behind "South Park" and "Team America" (that would be Pam Brady, also of "Hot Rod," not Parker or Stone), but the most comedic aspect of the film is Coogan's performance. The play isn't the thing as it suffers from high school play movie-itis - a production that looks more Hollywood than home grown. Like "Tropic Thunder," "Hamlet 2" introduces its main character via clips of his work as an actor, which include commercials for Jack Lalanne's power juice and a remedy for Herpes. Marschz is barely surviving by teaching drama in Tucson. His class puts on his original plays which are all based on big, commercial movies. His latest, "Erin Brokovitch," is taken down in flames by the local critic, who turns out to be a baby-faced middle schooler. Back at his drab home, wife Brie (Catherine Keener, "Into the Wild") is becoming disillusioned that they must take in boarder, Gary (David Arquette, the "Scream" franchise), to make ends meet. To further economize, Dana travels everywhere on skates - badly. When his class is expanded (and moved into the cafeteria), Dana must deal with the ethnic phobia of his white star Epiphany (Phoebe Strole) and Rand's (Skylar Astin) jealousy over new leading man stock. He turns to his critic for advise on how to save his department and fields the notion of 'Hamlet 2.' Intrigued by the absurdity of the idea, the young man greenlights him. He's further fired up when having taken Brie to the Prickly Pear fertility clinic (injoke alert!), he discovers his 'favorite actress,' Elisabeth Shue (Elisabeth Shue, "Leaving Las Vegas"), has become a nurse. She's invited to visit his class where nobody knows who she is and she admits giving a handjob as a victim of the casting couch. As his play takes shape, nothing can defeat the ever optimistic Marchz, not Rand's betrayal, not lack of a venue, not his wife's leaving nor concern verging on uprising by his students's parents who question the taste of the entire project. Cowriter/director Andrew Fleming ("Dick," "Nancy Drew") presents the anti-inspirational teacher in Marchz - the guy's a mess and Coogan is simply brilliant playing him, but Fleming's overloaded his film - it's so busy it has the air of one of those comedies where there are so many jokes, some should stick. But with ideas as sharp as the ones on display here, "Hamlet 2" should be a lot more finely honed that it is. A subplot concerning ACLU lawyer Cricket Feldstein (Amy Poehler, "Baby Mama") sets up the freedom of speech controversy that gives the play its fame, but Poehler, whose idea of funny here is to simply be agressive and use the word 'Jew' a lot, tanks. The play itself features believable donated space outfitted with technology and art direction this group could never have funded and teenagers who can suddenly sing and dance like pros (the numbers "Raped in the Face" and "Rock Me Jesus" are pretty funny, but the play itself, in which Hamlet uses a time machine to right wrongs, looks like it could grow old pretty quickly even with the Tuscon Gay Men's choir singing 'Someone Saved My Life Tonight'). In the end, Marschz is still the putz he always was, given success for the wrong reasons and destined for a spectacular fall. It's all rather sadistic, although having Shue as his new girl should help soften the blow (except that Dana's success has inspired her to resume acting, so probably not). "Hamlet 2's" successes are mostly about its cast. Coogan has never been funnier and Elizabeth Shue could find her career revitalized in real life. Keener is perfect as the just-past-being-supportive wife. The mostly unknown younger cast (with the exception of "Be Kind Rewind's" Melonie Diaz) are good, but Strole and Astin, as Dana's original students, stand out more than the pack that follow.