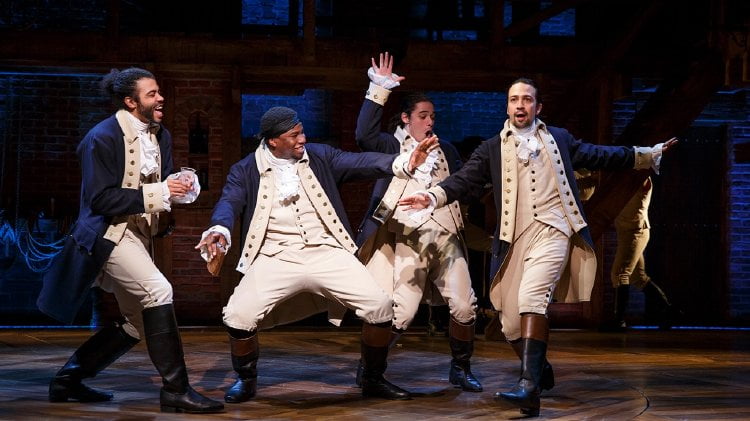 In his early teens, an orphan was sent from the Caribbean island of Nevis to New York to further his education.  He did so much more, joining the American Revolution, becoming one of the country’s Founding Fathers, a defender of the Constitution and the creator of the U.S. banking system as Washington’s First Secretary of the Treasury.  His name was Alexander “Hamilton.”

The historic, ground-breaking, record-breaking Tony and Pulitzer Prize winning 2015 musical ‘Hamilton: An American Musical’ was filmed near the end of its run with its original cast at New York's Richard Rodgers Theatre in 2016 directed by its Broadway director Thomas Kail.  Originally slated to open theatrically in 2021, due to the pandemic Disney has instead decided to add it to its Disney+ streaming platform just in time to celebrate America’s Independence.  You’d be hard pressed to find a better way to enjoy the July 4th holiday.

While record breaking numbers of people were able to see the show live, many, including myself, were not.  While a screen cannot deliver the experience of a shared, live performance, Kail does ensure we have the best seat in the house, utilizing three fixed camera positions in front of the stage, one over it and one hidden in its rear wall.  Additionally, a Steadicam, crane and dolly were used to film from within the performances themselves on a day no audience was present.  We get a dynamic (editing by Jonah Moran) view throughout, the camera pulled back to accentuate choreography, in close to emphasize quieter emotions.  I can’t believe I’m saying this, but I am surprised the filmmakers didn’t employ 3D which could have arguably heightened the experience even more.

Jumping off from Ron Chernow’s book, star Lin-Manuel Miranda reimagines history as told through the eyes of an immigrant, cast largely with Black and Latinx actors and featuring anachronistic rap along with more traditional musical elements.  As we watch those history has its eye on spin out their stories in fast-paced rhyme, one marvels at the mental endurance and dexterity required to play these parts.

Miranda introduces Hamilton to his eventual killer Aaron Burr (Leslie Odom, Jr.) early as a college mentor before the two travel paths both parallel (both orphans, both having sons) and opposing (Burr’s jealousy at Hamilton’s place by Washington’s (Christopher Jackson) side).  A bar (‘two pints of Sam Adams’) provides a birthplace of revolution with Hercules Mulligan (Okieriete Onaodowan), John Laurens (Anthony Ramos) and the Marquis de Lafayette (Daveed Diggs).  (All three actors will reappear later in new roles as James Madison, Hamilton’s son Philip and Thomas Jefferson, as will Jasmine Cephas Jones as first the youngest Schuyler sister Peggy, then as Hamilton’s scandalous lover Maria Reynolds.)

As King George (the hilarious Jonathan Groff) promises to prove his love by killing all our friends and family, the war is won.  Hamilton marries Eliza Schuyler (Phillipa Soo) while her smitten sister Angelica (Renée Elise Goldsberry) departs for London, but is consumed by his role, writing the bulk of The Federalist Papers.  But when Washington departs the presidency, Hamilton finds himself pitted against Jefferson (their rap battles are some of the film’s highlights) and when his wife departs for the country, his affair with Maria Reynolds finds him blackmailed by her husband.

Miranda’s revisionist take is as refreshing as Branaugh’s brightening of Shakespeare back in the 90’s.  Often funny, with newfound tragedy in the lesser known aspects of Hamilton’s personal life, his themes (Not giving up one’s shot, the eyes of history, running out of time) reverberate throughout.  At two hours and forty minutes, the musical does have a few down spots – when Jefferson says ‘Now, back to politics!’ one couldn’t agree more – but it would be difficult to decide where to trim without losing the richness Miranda brings to his titular character.

The cast is, of course, exceptional (Odom Jr., Diggs and Goldsberry won Tonys), with Diggs’ mirthful Lafayette and off kilter Jefferson a standout.  Kail and his six cinematographers elevate the Howell Binkley’s magical, Tony winning lighting, which, combined with the multi-rotating stage design, often seems like a special effect.  And, as a final note of inclusion, if history is indeed written by the winners, in its final moments “Hamilton” reminds us that his was written by a woman – his wife.

I have never been a “fan” of musicals. Of course, as a film critic, I am not totally stupid and can recognize a great movie, whether musical, drama or comedy. Take, for example, “Cabaret (1972)” and “All That Jazz (1979)” - both, as I think of it, by Bob Fosse – or the stylish “Across the Universe (2007),” by Julie Taymor, as musicals I really like. And, yes, there are a few other “musicals” in this category. But, all that said, I do not, generally, like musicals.

Now, let us talk about “Hamilton,” directed over the course of June 2016 by Thomas Kail on stage at the Richard Rodgers Theater on Broadway with the original cast. I sat there, patiently, and watched a two hour 40 minute stage musical – and did not hate it! For me, that is high praise for any musical. (Though I do get a headache trying to make out the clever song dialogs – this is one reason why I do not like musicals.)

Show developer Lin-Manuel Miranda wrote the musical book for “Hamilton,” adapting the 2004 biography by Ron Chernow, Alexander Hamilton. As, such, music notwithstanding, “Hamilton” tells the concise story of his rise, from humble roots as an orphan born out of wedlock, to the office of Secretary of the US Treasury and, finally, to his untimely demise at the hand of Vice President Aaron Burr in a duel. As expected, there is a whole lot of American history buried beneath the pithy lyrics and varied music that moves from hip-hop to rap to jazz to the blues to Broadway-type songs.

Technically, from production design and the always morphing set to the energetic choreography and creatively written songs, it is a first class effort all around. The copious vocal talents give energetic life to the play’s many songs.

Even for a curmudgeon like me, I can see why “Hamilton” is such a hit. I cannot see why anyone would pay hundreds of dollars to sit in a cramped theater seat and rub shoulders with other fans. Oh, yeah. It is because you are fans, so enjoy.