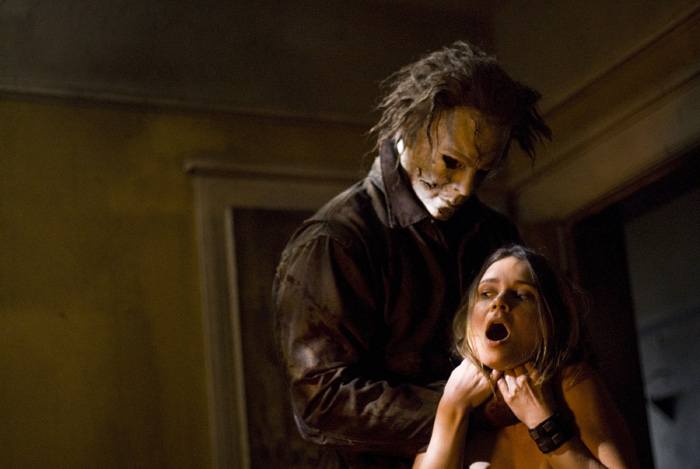 With "The Devil's Rejects," Zombie established himself as a master of exploitation cinema, but with his "Halloween" remake he takes a few steps back. There is none of the joyful rush of true anarchy and black humor that made the "Rejects" so exhilarating to watch. Instead "Halloween" is a sometimes thoughtful reimagining which focuses on the psychology of the Myers family, particularly Michael, but which is also plodding and brutal rather than horrific. The leaner, creepier original remains the classic. Zombie works the mythology in imaginatively, beginning with that briefly glimpsed clown mask of Carpenter's version. This Michael wears a Bozo edition and is introduced having a decidedly split relationship with his pet rat Elvis (he sooths him, then dismembers him). He comes down to breakfast where his foul-mouthed mom has been dealing with screaming baby Boo and her loutish alcoholic live-in Ronnie (William Forsythe, "The Devil's Rejects"). Mom has kind yet distracted words for Michael, but Ronnie and sister Judith (Hanna Hall, "Forrest Gump," "The Virgin Suicides") heap sexually tinged scorn upon him. Then the kids at school taunt him with newspaper ads touting his mom as a pole dancer. It's all too much for the boy, but mom is too harried to think that the pictures Loomis shows her of tortured dead animals is the work of her son. Michael proceeds to beat a classmate to death in the woods on the way home (and Zombie doesn't spare the violence - his killings are harsh and hard). On her way out to work, mom ironically tells the boy, who is presumably being taken Trick or Treatin' by his older sister, "Better live it up tonight because things will change tomorrow." Truer words were never spoken. Sis ditches him for a romp with her boyfriend (who brings the infamous Michael mask in an effort to scare her) and after a dejected solo outing, young Michael comes home and snaps and Zombie revels in the carnage that provides the background for the iconic slasher monster. All this is filmed, like "Rejects," in gritty seventies's style, but although Zombie takes care laying his groundwork, his only concession to humor is his killing cue - Blue Öyster Cult's "(Don't Fear) The Reaper." There's careful attention to the mythology - Michael doesn't speak for fifteen years but shows what is going on inside his head by the masks he creates before being reunited with his signature one - the mechanic's jumpsuit is provided by Big Joe Grizzley (Ken Foree, "The Devil's Rejects"), a trucker who finds himself in the adult Michael's route back home. Boo - the innocent too young to taunt him - was spared to grow up and become Laurie (Scout Taylor-Compton, "An American Crime"), adopted by the Strodes, all three unaware of her previous identity. The psychology is subtle as well - Myers is more physically powerful here (if less supernatural) and his killings are fierce and swift, except when it comes to Ismael Cruz (Danny Trejo, "The Devil's Rejects," "Grindhouse"), the asylum custodian who was kind to him and so is offed like one of his earlier animal victims - tortured first. Once Myers (Tyler Mane, "The Devil's Rejects") returns to the scene of the crime, Zombie is pretty faithful to the original while making the film his own with stylistic changes - the louvered closet Laurie hid in is now the space behind a slatted wall, the 'ghost and glasses' scene now takes place in the Myers' home, Annie is pulled back into her home "Texas Chainsaw" style. But given the film's extended backgrounding, the second act just goes on too long, particularly when Laurie squares off against her older bro. The film goes out with another psychological connection to a character's earlier incarnation in a twist on the original's ending (and yes, it does lend itself to a sequel), but it is grim stuff, an unrelenting downer. Acting is OK, with only Myers, both young and old, having any true impact (the younger benefits from an odd face with bulging eyes, Mane from his physicality). McDowell is ineffectual as Loomis and the early Myers family too cartoony ugly in their behavior (Moon does achieve some humanity as mom). Just about the entire cast of "The Devil's Rejects" reappears, but most of them in disappointing cameos, like Sid Haig's brief turn as a Cemetery director or Towles, Easterbrook and Moseley as a trio of guards. Daniel Roebuck reappears as a TV personality. Zombie tips his hat again to stars of the seventies by casting Dee Wallace ("The Howling") as Mrs. Strode and Sybil Danning ("Blood Feast," "Howling II," "Grindhouse") as ill-fated Nurse Wynn (in a poorly directed, obvious setup) and featuring cameos by the likes of Udo Kier and the Monkee's Micky Dolenz.