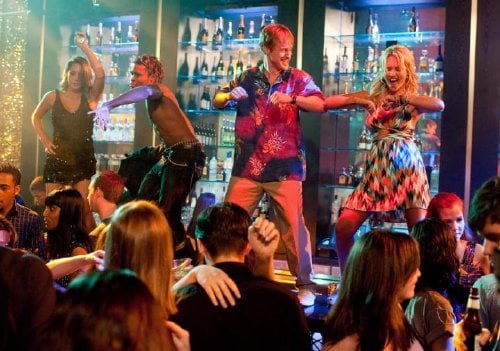 Rick (Owen Wilson, "How Do You Know"), Fred (Jason Sudeikis, SNL, "Going the Distance"), Gary (Stephen Merchant, "Hot Fuzz"), Hog-Head (Larry Joe Campbell, TV's 'According to Jim') and Flats (J.B. Smoove, HBO's 'Curb Your Enthusiasm') get into an aggressive game of 'how much would you pay for a free pass with a hot woman' while playing poker. Unbeknownst to them, Rick's wife Maggie (Jenna Fischer, TV's 'The Office') hears the whole thing over the baby monitor. When she and Fred's wife Grace (Christina Applegate) complain about their husbands's rubber necking to Dr. Lucy (Joy Behar, TV's 'The View'), she parries with an unusual idea, one she says worked wonders for her own marriage - give the guys one week off from it. Give them a "Hall Pass."

It says something that two days after having seen this film, I remember little of it but the unnecessary grossout gags. Cowriters (with Pete Jones, Kevin Barnett)/directors Peter & Bobby Farrelly ("There's Something About Mary," "Stuck On You") have a good idea here, but too often they undermine it. Seriously, what's supposed to be funny about a guy having a dump in a sand trap? There are some amusing, if not hilarious, moments. At the house warming of pretentious buddy Ed Long (Farrelly Brothers regular Rob Moran), Rick and Fred speak their minds as everyone else overhears from a safe room security camera, and while this is a repeat of the poker game setup (the Farrellys borrow gags from previous films as well), Wilson and Sudeikis are funny, at least until they go too low brow. Flats questions his friends' choice of Applebee's as a pickup spot, then suggests Chili's in its stead (of course, "Hall Pass" isn't subtle with its product placements which also include Coca Cola, Ocean State Job Lot and Ben & Jerry's). When the guy's legendary friend Coakley returns to town, it's Richard Jenkins ("The Visitor," "Let Me In") sporting an eighteen year old's wardrobe and a sunglass tan line and they still think he's cool. Trying to impress coffee shop girl Leigh (Nicky Whelan, TV's 'Scrubs'), Rick goes to her gym only to be made legless by falling asleep in the Jacuzzi, but the Farrellys don't know when to quit here either. The film switches back and forth between what the guys are up to, and Maggie and Grace's vacation on the Cape, where they, of course, are drawing the attention of a hot baseball player (Tyler Hoechlin, "Road to Perdition") and the team's coach (Bruce Thomas). One of the two will succumb only to be humiliated and, of course, it will be her husband who cheats to even the score. While there is humor to be mined from the guys over-inflated idea of their ability to draw hot women, everything turns offputting and ugly. Owen Wilson seems to have aged about ten years since his last onscreen appearance only two months ago. He's doing his usual schtick here. None of the leads bring anything remotely special to the film. Jenkins gets a couple of laughs, but his character is so ludicrous he has nowhere to take it - he's a walking sight gag. Once upon a time, the Farrelly brothers actually made some good comedies. "Hall Pass" is not a return to form.