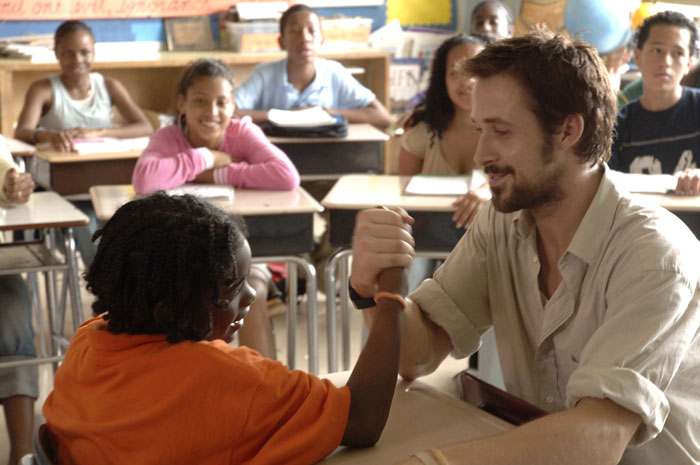 Half Nelson, n. 'A wrestling hold in which one arm is passed under the opponent's arm from behind to the back of the neck.'

Dan Dunne (Ryan Gosling "The Notebook," "Stay") is a middle school history teacher and basketball coach who simply cannot face the stresses of adulthood, yet considers his crack cocaine habit something he has under control. 'My kids keep me focused,' he says, but one fourteen year-old girl, Drey (Shareeka Epps), becomes the functional addict's friend and sticks by his side as he spirals downward in "Half Nelson." Director Ryan Fleck and his writing partner Anna Boden have created a true Indie gem, a film about what makes family, but not in that cliched cute indie way of throwing together a bunch of lovable misfits. Instead Fleck and Boden look deeper into what family means on levels like responsibility, heredity, encouragement and enablement. After a full day of prodding inner city kids to expand their horizons, Dan returns home to his crummy bachelor pad to find calls from a collection agency and his ex-girlfriend on his answering machine. He ignores the former by habit and replays the latter with a mixture of yearning and alarm. Rachel's (Tina Holmes, "Keane," "Pretty Persuasion") voice is clearly something Dan loves, but her call comes from a world he cannot deal with. He hits the clubs, drinking and doing lines, and forces himself into school the next day. When Rachel actually appears at his afternoon game, he refuses to be cornered into a real discussion. This exchange has been witnessed by Drey, a latch key kid who frequently accepts rides home from Mr. Dunne. When she hits the locker room bathroom after everyone has left, she senses someone in the stalls. Opening a door, she finds her teacher hiding on a toilet, pale and sweating, drug apparatus in his hand. With this shared secret, their relationship becomes both deeper and trickier. Drey, whose single mom works multiple shifts and whose brother is in jail, also has a complex relationship with another older man - Frank (Anthony Mackie, "Million Dollar Baby," "Freedomland") - the local drug dealer who is responsible for her brother's plight but who also acts as a father figure and whose gifts of guilt money help support the family. There is, of course, great irony in Dan's objection to Frank's presence in Drey's life and Frank, in turn, thinks Drey's relationship with her teacher is inappropriate. But where the drug dealer is perhaps a more stable influence for the young teen he is also more dangerous - it is the 'basehead' who offers her fierce love and protection. Ryan Gosling is a searing young talent and his Dan Dunne is simply one of the great male performances of the year. He's created a character that we care about in spite of his behavior, a man we want to shake the weakness from. Gosling physically shows the light die inside Dan every time he's thrown a curve ball (watch him crumple when he spies the inert form of his cat, Dave), and the increasing amount of will it takes to revive himself each day. Sixteen year old Shareeka Epps, who starred in the short, "Gowanus, Brooklyn," on which "Half Nelson" is based, gives a breakthrough performance as the wise beyond her years Drey. She's a stoic young girl with the backbone to question her teacher's behavior directly to his face without ever seeming judgmental - a beautiful balancing act for one so young to pull off. Epps also gets to display bravado when Drey's street smarts take over getting her stolen bike back from a neighborhood kid. Mackie is right up there too as the smooth dealer with a compromised sense of family and character actors Deborah Rush ("American Wedding," "Strangers with Candy") and Jay O. Sanders ("The Day After Tomorrow") make strong impressions in a third act revelation as Dan's parents. Ryan Fleck has confident command of his material, plunking his audience into situations without explaining anything, letting them fill in gaps and answer their own questions along the way. Fleck and Boden's dialogue features character-defining moments ('Second chances are rare man, you oughta take better advantage of them,' 'One thing doesn't make a man') that fold naturally into their situations and original music by Broken-Social-Scene is complementary to Dan's state of mind. "Half Nelson" features one of the best male performances of the year from Gosling and is a breakthrough for its filmmakers and young costar Epps. It's a must see for any serious filmgoer.

By day, Dan Dunne (Ryan Gosling) is a dedicated inner city junior high school teacher who eschews the approved history curriculum to give his kids an insightful and entertaining look into the past. By night, though, he is a completely different person: a coke addict to the nth degree. But, the paths of night and day start to blur as Dan begins his snorting and smoking during school hours in “Half Nelson." Dan’s addiction brings him to the deserted girls’ room at his school where he sparks up his trusty crack pipe. He falls into a drug soaked haze and is discovered by one of his students, Drey (Shareeka Epps). “I’m sorry, I’m fine,” he tells her (a phrase he will use many times during the course of “Half Nelson”) as he stares through bleary eyes. She takes pity on her favorite teacher and keeps his dark secret to herself. A bonding friendship begins between the two as they support each other’s problems: his addiction and her turbulent life. They travel dangerous waters that could be disastrous for either – or both. Helmer Ryan Fleck turns his 2003 short, “Gowanus, Brooklyn,” into his first feature length film with a story about two lonely people - Dan because of his obsessive coke addiction and esteem problems; Drey because of her broken family and struggle to survive in the ghetto – who find and support each other as they try struggle to straighten out their lives. Though Ryan Gosling has yet to create as powerful a character as he did as a neo-Nazi skinhead in “The Believer,” he does a solid job as the intelligent, though drug-addled, teacher spiraling ever downward. His heart is with his students but his mind is hazed in the fog of his increasing visits with coke and crack. The wonder of “Half Nelson” lay in the marvelous debut performance by Shakeera Epps as Drey. The young actress gives full dimension to her character as she befriends Dan while she copes with a jailed brother and a drug dealing guardian. She particularly shines out in one scene when she confronts a much bigger boy who stole her bike. She gets it back and you believe her threatto kick his butt. It is a fine premier performance by a youngster and should be looked to for consideration come year’s end. The rest of the cast is there simply to fill in the background, with one exception: Anthony Mackey gives a layered perf as Frank, the drug-dealing guardian to Drey. There is a struggle and an understanding between he and Dan with the welfare of the girl viewed in very different, conflicting ways. There is respect between the two men as they each think they understand the teen’s needs. Both are far a field. Half Nelson” is an interesting character study by the two leads that gets beneath the surface, though not too deep. Techs are low-rent but it is still an interesting story of love and friendship between two people a world apart.