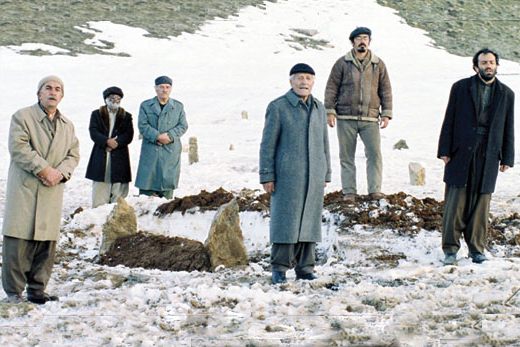 Saddam Hussein has fallen from power and iconic Kurdish musician, Mamo (Ismail Ghaffari) has received authorization to lead a dozen of his sons to their homeland to celebrate their musical heritage. The journey they enter upon brings them to the heights of happiness and the depths of despair in "Half Moon."

Iranian helmer Bahman Ghobadi has brought us such masterful and personal films as "A Time for Drunken Horses" and "Turtles Can Fly." With "Half Moon," his entry into the international New Crown Hope Film Series that commemorates the 250th anniversary of Mozart's birth, Ghobadi continues to explore the lives of people (adults, not children as in the other films mentioned) in the turbulent territories of the Middle East, this time in Kurdistan. Mamo is in the twilight years of his life as a respected, even adored, Kurdish folk musician. When he receives permission to cross the border from Iran into Kurdistan, Iraq to perform a concert to celebrate the fall of Saddam Hussein, he orders one of his sons, Kako (Allah Morad Rashtiani), to procure a bus to take the maestro and a dozen sons, all musicians, across the border to perform their art. A local soothsayer warns that the trip is fraught with danger and disaster but Mamo is undeterred in his quest. Before they begin their journey, they make a stop to pick up Hesho (Hedye Tehrani), Mamo?s exiled singer and muse. The stopover is a risky one for two reasons: Iranian women are not permitted to sing in public and are not allowed to travel in the company of men. Mamo ignores the dangers and they head for the Kurdistan border and their appointment with destiny. Along the way, they meet with both kindness and cruelty as Mamo and his troupe attempt to make the hazardous crossing. Ghobadi mixes low and high tech in telling the story of Mamo?s mission to bring his music back to his homeland. The battered bus that Kako commandeers is a primitive rattletrap with wooden benches in place of real seats. The rolling relic, though, is also the platform that allows one of Mamo?s sons to connect his laptop to the worldwide web and Mapquest to find a way around the obstacles that keep cropping up in their path. ?Half Moon,? written by Ghobadi and Behnam Behzadi, has an incredible story arc that begins with mirthful lightness but slowly and lyrically shifts to sober dedication as the ailing and failing Mamo is undeterred in his musical quest. The flow of this music-saturated story grips you right from the start and keeps you in its hold as we, the viewer, travel with his troupe and are up close and personal to the trials of their trip. Ghobadi, who also wears the art director?s hat for ?Half Moon,? utilizes a stunning collection of bright pastel colors to give the grand-scale musical numbers beautiful imagery. Cinematographers Nigel Bluck and Crighton Bone deftly use their video cameras to give the film a majestic look, although the panoramic shots, and there are many of the stark landscape, show the limits of the recording medium. Still, the film does an excellent job capturing the beauty of the troubled land. This is the first of the films we saw as part of the New Crown Hope series and it is an auspicious start to what is proving to be a rich, brilliant celebration of the birth of one of the world?s greatest composers. With music at the center of the series, Ghobadi uses this focus to tell a moving road movie that culminates in a dramatic, music-saturated finale.