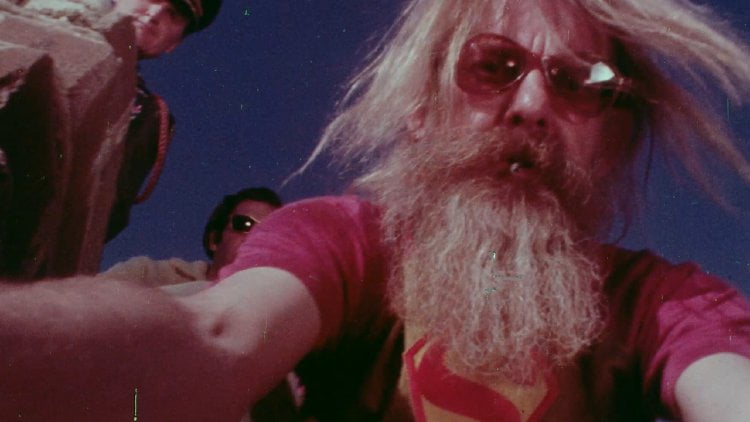 When the auteurs of one of the greatest decades in American cinema, the 1970's, are discussed, the names that usually come up are those of Scorsese, Spielberg, Coppola, Allen and Altman. But the man who made "Harold and Maude," "The Last Detail," "Shampoo," "Bound for Glory," "Coming Home" and "Being There" within those years often goes unmentioned. The pot smoking, anti-authoritarian, uncompromising social justice warrior who worked his way into the industry by joining Norman Jewison in the editing room was known as "Hal."

It is fitting that a long overdue documentary on Hal Ashby comes from a first time director, Amy Scott, whose prior film credits are for editing documentaries, including this one. This glorious celebration of a unique and influential filmmaker takes its foot off the gas when it hits Ashby's problem years, glossing over any deep seated analysis of just how his career went awry, but Scott has captured the essence of the man and his work in his heyday. Ashby came from a dysfunctional Mormon family in Utah, his father committing suicide when he was twelve. He left at a young age, first working in oil fields before becoming a self taught auteur by getting his foot in the door as an associate editor. Ashby believed that films were made in the editing room and he became lifelong friends with Norman Jewison after a chance meeting on a studio lot, gobsmacked that Jewison worked for the great William Wyler. Scott and Jewison share Hal's tremendously affectionate letters. This unabashed manner of his made him one of those people whose charm convinced others he had their sole attention. Scott skips through Ashby's filmography by linking his character traits to his films, so his father's suicide leads into a discourse on "Harold and Maude," his benevolent womanizing (he was married five times) into "Shampoo," etc. It is an effective method for tying the man to his work. The documentary is full of anecdotes, like the time Hal remembered the Academy Award ceremony at the last minute, a friend driving him to the show where he arrived just in time to pick up an Oscar for editing Jewison's "In the Heat of the Night," his short speech a plea for 'peace, love and equality.' A producer notes the contact high he would get visiting Ashby in his editing room, the filmmaker so dedicated he would eat and sleep there while working on a film. The huge success of "Shampoo" may have change him ever so slightly, leading to a rare bit of contentiousness with his next film's cinematographer, his good friend Haskell Wexler. But he encouraged Wexler to go for one of his riskier ideas and the first Steadicam shot in "Bound for Glory" surely contributed to Wexler's Oscar for that film. Hollywood elites like director David O. Russell and actress Jane Fonda, his "Coming Home" star, share reverence and memories. But Ashby stumbled in the 80's delivering a stream of duds like "The Slugger's Wife." 'They didn't respect him and it killed him,' we are told. Ashby's drug use was exaggerated by a Hollywood gone more corporate. He was blocked from directing "Tootsie" (we see his tests with Dustin Hoffman) over a contract dispute. Scott provides indignant testimony, but not quite enough reasoning into why Ashby's unfailing magic touch began to elude him. The film is scored to Cat Stevens ("Harold and Maude") music, a nice aural counterpart to the bearded, Bohemian filmmaker. He died too young at 59 of pancreatic cancer. At his funeral, Bud Cort eulogized him, opening with 'Hal liked me best,' drawing a hearty laugh from those assembled, all probably feeling just the same way. "Hal" is a treasure trove for those, like myself, who love his work, "Being There" being one of a handful of films I'd designate as perfect in every respect. Scott's documentary may not be perfect, but its loving embrace of an extraordinary filmmaker will hopefully vault him into a pantheon where he's so often forgotten. Grade: