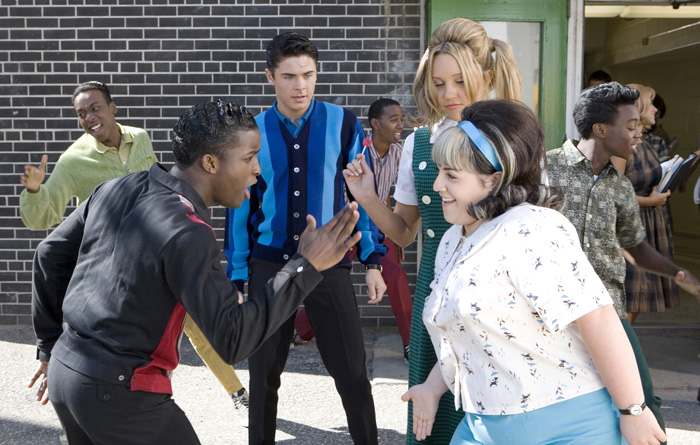 1962 Baltimore. Teenaged Tracy Turnblad (newcomer Nikki Blonsky) wants nothing more than to dance on a local afternoon show. When she gets a shot at an audition, overweight mom Edna (John Travolta) is afraid her affliction, which her daughter has inherited, will cause her harm, while dad Wilbur (Christopher Walken, "Click," "Man of the Year") encourages her to follow her dream. Racist station manager Velma Von Tussle (Michelle Pfeiffer, "White Oleander") wants nothing to do with a hefty integrationist, but through a twisted course of events Tracy soon finds herself up against Velma's daughter for the title of Miss "Hairspray."

Director Adam Shankman ("A Walk to Remember," "The Pacifier") gets the music in the musical in Leslie Dixon's ("Just Like Heaven") delightful adaptation of the John Waters' original and its subsequent Broadway production. Several beautifully intercut musical numbers keep the action moving and the dialogue in between is sweet, tart and subversive. The cast offers one delight after another, from Blonsky's appealing wholesomeness crossed with the need to boogie to the return of Pfeiffer in full villainess mode and Travolta as blushing bride. Tracy's propensity to end up in detention ends up a blessing in disguise when she's exposed to the Blacks in her high school class shimmying the time away. Seaweed J. Stubbs (the talented and handsome Elijah Kelley of "Take the Lead") notes that the white girl can dance as she effortlessly cops his moves. When 'Negro Day' rolls around on The Corny Collins Show, Stubbs shines attention on Tracy behind the lines and Corny is convinced she'd make a great regular. Edna is amazed by her little girl's success and begins to come out of her own shell, but Velma is seriously not amused and aims to get rid of both Tracy and the Negroes. "Hairspray" offers up racial jibes like Velma talking about leading her dance team away from 'race music' by 'steering them in the white direction' that make one laugh as one's jaw is dropping. As endlessly plucky emcee Corny, James Marsden ("X-Men: The Last Stand," "Superman Returns") is a revelation. He sings his show's opening lyrics and informs us that the group he's introduced are 'the nice white kids in town every day,' but 'once a month is Negro day,' with the gusto of a toothpaste ad, so it's a surprise when he sides against former beauty queen von Tussel and with the kids who can really dance. It's a neat twist on an old cliche. Show star Amber von Tussel (Brittany Snow, "The Pacifier," "John Tucker Must Die") is clearly hated by the others, even as show dreamboat Link Larkin (Zac Efron, TV's "High School Musical") acts as her obedient escort. Imagine the furor when Link actually falls for Turnblad (voiced in song to Tracy's photo - which sings back). Of course, most of the attention for "Hairspray" is focused on Travolta's turn playing the obese mother of Tracy, a role originated by drag queen Divine then performed on Broadway by Harvey Fierstein, a former female impersonator. Travolta plays the role as a shy woman embarrassed by her appearance who blossoms in her daughter's wake. He's so convincing you'll stop seeing Travolta for Turnblad, but ironically his musical numbers are less successful as he fails to keep his female singing voice in character. The best of his numbers is a replay of 'Big Blonde and Beautiful,' where Edna is intercut with Motormouth Maybelle (Queen Latifah, "The Last Holiday"), the guest emcee of Corny's 'Negro' days. And Travolta's paired romantically with Walken, another song and dance man who never gets a chance to let 'er rip. Pfeiffer, on the other hand, who's separated from Big John by one degree in the "Grease" series, holds the stage for her big number and is quite amusing in her attempts to seduce Wilbur in his joke shop. As Tracy's best friend Penny Pingleton, Amanda Bynes ("She's the Man") starts out like a blissed out piece of wood, but her interracial romance with Seaweed gradually brings out something more in the actress. Allison Janney ("Winter Solstice," "Strangers with Candy") is a hoot as her strait-laced mother Prudy. Waters appears in a cameo as a flasher while Ricki Lake is less successfully incorporated as a William Morris agent. It's a treat to see a nice, bouncy musical with a real messages served up with no preaching and plenty of nudge, nudge, wink, winks. As Corky says in his hairspray ad - 'every girl needs a stiff one!'