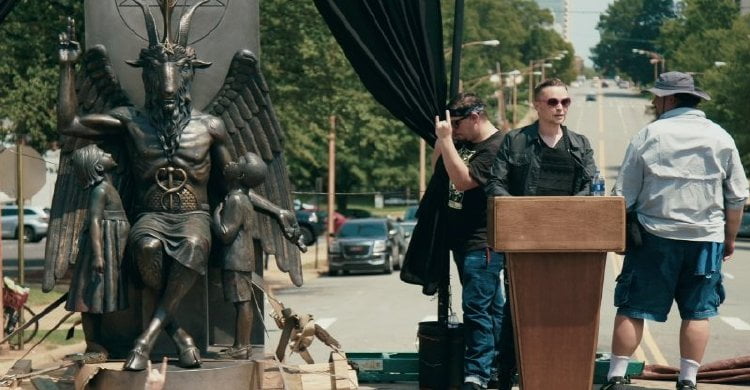 In 2013, the Satanic Temple was founded, by Lucien Greaves and two others, “to encourage benevolence and empathy among all people.” Since then, the ranks have swelled to over 50000 members world-wide. The story of this unusual protest movement is told, by director Penny Lane, in “Hail Satan?”

A horned and black caped spokesperson for The Satanic Temple stands on the steps of Florida’s State Capitol proclaiming “Hail Satan! Hail Rick Scott!” in support of the Governor’s proposal to allow prayers in schools. At first this seems counterintuitive, but the new religion of The Satanic Temple is a wily movement to preserve the separation of Church and State as well as religious freedoms. Every move to declare the U.S. a ‘Christian country’ by such actions as erecting a Ten Commandments monument on government property is met with its satanic counterpart as backed by the Constitution in “Hail Satan?” Penny Lane’s (“Our Nixon”) carefully constructed documentary starts with an amusing jolt before rewinding to the organization’s founding in Salem, MA. Sprinkling news footage, movie and television clips and interviews throughout, Lane builds an entertaining and thought provoking case for The Satanic Temple. I know I was won over, enthusiastically so, but before anyone begins slowly backing away be aware that these folks, while definitely edgy individualists, should not be confused with the Church of Satan. They are not evil and do not literally worship a Dark Lord even if they’re not above performing an actual Black Mass to take aim at the patriarchy and suppression of knowledge (a stunt rewarded with a mile long protest at Harvard University, who caved, the event moving to the inviting Hong Kong restaurant). They even have a response to the Ten Commandments in their Seven Tenets (https://thesatanictemple.com/pages/tenets), which looks like pretty solid moral guidance to me. They're probably closest to atheism, but as it is pointed out, atheism is about what one is not whereas the Temple is about what one is. Some consider them satirical activists, but if the government accepts Scientology as a religion with tax benefits, why not the Temple? Cofounder Lucien Greaves emerges from the shadows as the face of the Temple after he realizes no hired gun can respond to reporters as well as he can (while his milky, blind eye may be suspected as a demonic contact adornment, it is the result of an actual injury). We see him being interviewed by a perplexed Megyn Kelly on Fox News, where he declares himself a ‘rebel against tyranny.’ The group then makes headlines for ‘turning dead people gay’ after a stunt at the grave of Westboro Baptist Church’s Fred Phelps’ mother, a neat bit of table turning given Westboro’s shameless antics at many a funeral. But this proves a mere warm-up to the Temple’s fight with Republican Arkansas state Senator Jason Rapert’s erection of a Ten Commandments monument on state Capitol grounds. The Temple’s demands to raise their own Baphomet statue was summed up by Greaves - ‘We were doing more than giving a middle finger to the Evangelical right, we were giving the state a civics lesson.’ The group’s use of fetishized babies against abortion clinic protestors, an idea arrived at because of the religious right’s fetus fetishization, is less well reasoned. But that effort was led by the Temple’s Detroit chapter led by Jex Blackmore, a valued early member whose subsequent poor reasoning (she called for the kidnapping executives and the execution of the president during an art performance piece) led to her expulsion. “Hail Satan?” paints the Satanic Temple like an offshoot of the ACLU, albeit one that champions nudity. And snakes. One member’s analysis of the Garden of Eden story is a fascinating upending, one which posits blind faith religion as anti-knowledge. Some may be skeptical, but it’s a joyous sight to watch tatted and pierced members of assorted unnatural hair colors happily contributing to their communities by adopting highways and beaches for cleanup. Their preferred tools? Pitchforks. Grade:

I have eschewed modern religions since the 1960s and I should feel that way about the Satanic Temple. But as I watched “Hail Satan?” I realized that I was not seeing a documentary about a religious cult worshipping the Devil. It is, instead, the story of the formation of a political activist group that promotes equality for all people, social justice and, most importantly, a real separation of church and state – a direct and needed jab against the dominating evangelistic Christian right in our country. The main track of the Satanic Temple story centers on the group’s protest in response to the installation of a Ten Commandment monument outside the Oklahoma State Capital. The temple commissioned a bronze monument depicting the deity Baphomet with two children to also be installed on the state capitol grounds, citing “respect for diversity and religious minorities.” The Temple’s battle for equal voice ended with the state court ordering the 10 Commandment monument removed. But, this one battle is not the only thing that director Lane covers in this eye-opening, irreverent documentary about religious hypocrisy and religious freedom. The Temple members use protest, theater and legal actions to promote their humanitarian programs to protect children, women’s right to control their own bodies (rather than old white male legislators) and religious freedom (a first amendment right). One thing I took away while watching “Hail Satan?” is the inherent sense of humor of the congregation even as they take on serious social issues. We will be paying a visit to the Satanic Temple in Salem soon because of this enlightening and entertaining document.