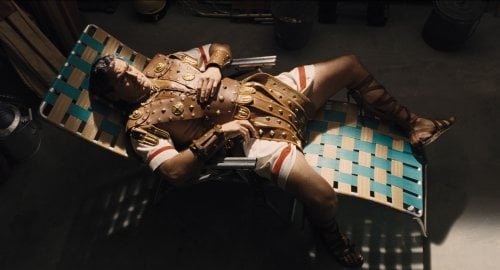 Who but the Coen brothers could make a Christ allegory with the Imperial Garden Chinese restaurant as the desert where Jesus is tempted? Eddie Mannix (Josh Brolin) is the embattled head of Capital Pictures dealing with an Esther Williams-like star's (Scarlett Johansson) unwed pregnancy, his own Mary Magdalene, and a kidnapped star (George Clooney) who becomes a Doubting Thomas. There is a Judas, too, of course, but to reveal him would be a spoiler. The movie's fun, a musical where Channing Tatum not only dances, but sings and where a singing cowboy (Alden Ehrenreich, "Stoker," "Beautiful Creatures") is pushed into a drawing room comedy much to the dismay of its gay British director (Ralph Fiennes). In this version of 1950's Hollywood, a group of writers (including Fisher Stevens, David Krumholtz and Fred Melamed with Alex Karpovsky as Mr. Smitrovich) are Communists plotting the overthrow of the Capitalist studio system while a pair of twin gossip columnists (Tilda Swinton) keeps trying to outscoop each other. Frances McDormand is an Isadora Dunan-like film editor, Jonah Hill is a 'professional person,' Alison Pill is Eddie's Guardian angel of a wife and Christopher Lambert is Arne Seslum, the married German director who is the father of DeeAnna's child. Brolin easily carries the weight of the production on his shoulders while Clooney serves eggs with his ham. The thoroughly charming Ehrenreich steals every scene he's in with an unexpectedly fine performance that should give him a big career bump. Also notable is Heather Goldenhersh ("School of Rock," "Leatherheads") as Eddie's efficient assistant. Coen regular Mary Zophres's costume design is a huge plus, Johansson's mermaid costume a real knockout. "Hail, Caesar!'s" test of faith isn't as tightly knit or uproariously funny as that of "A Serious Man's," but even when the Coens aren't at the top of their game, their movies offer plenty to chew on. Grade:

Joel and Ethan Coen, since their breakthrough debut “Blood Simple” in 1984, have created 19 films and, like another great, single-minded director, Woody Allen, do not always hit it out of the park. The brothers and Woody have many great films to their credit, but not all of them. “Hail, Caesar!” reps, to me, a solid double but lacks something to put in the pantheon of, say, “Fargo” or “No Country for Old Men.” Eddie Mannix has a love/hate relationship with his job as studio troubleshooter. He works long hours and has to put up with the oft stupid actions of his demanding charges. It is a day in Eddie’s hectic life and Josh Brolin is the kingpin that the film pivots upon. The actor does a solid job and is the thread that holds things together. But, the other stories that adhere to the thread detour down their own paths. This is not a bad thing but takes away from the day in the life of Eddie Mannix tale. The side stories do hold together well in chapter-like fashion as they each focus on their star. Scarlett Johansson, as DeeAnna, is the Ester Williams-esque star of Busby Berkley style water extravaganzas. The only problem for the studio and, by extension, Eddie is she is pregnant – and unmarried. George Clooney, as the studio’s favorite, Baird Whitlock, is kidnapped by a communist group known as The Future and is being held for $100000 ransom. Handsome Hobie Doyle (Alden Ehrenreich) is a Gary Cooper-ish cowboy star who is being pushed into the limelight of big budget production helmed by the flamboyant and demanding Laurence Laurentz (Ralph Fiennes). Channing Tatum is song-and-dance star Burt Gurney, who has suspicious commie leanings, gets the best jaw-jutting posing, a la John Barrymore. Tilda Swinton has good fun as twin gossip columnists, Thora and Thessaly Thacker, channeling Louella Parsons and Hedda Hopper. Production is amazing on all levels. The Coens and their behind the camera team create old Hollywood productions on a scale that is often the equal to the originals, with choreography on the scale of Busby Berkley’s best. Sets are lavish to the appropriate scale and the cinematography, by the great and unheralded Roger Deakins, is splendid. The Coen brothers pay homage to the kind of films from our past that greatly influenced their future. The individual parts are each greater than the whole but I hoped, this being from the brothers, for something the other way around.