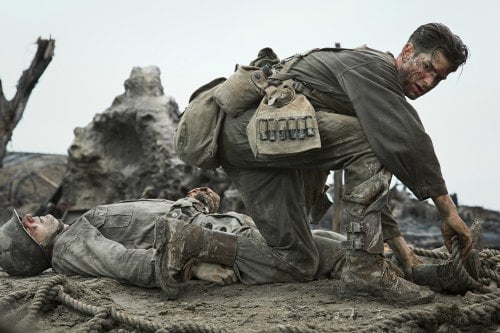 When WWII broke out, Desmond Doss (Andrew Garfield, "The Social Network") had a conundrum. Although he wished to serve his country, Doss's Seventh Day Adventist beliefs precluded him from even touching a weapon. Relentlessly persecuted during military training, the army medic fought a court martial and went on to save countless lives on Okinawa, becoming the first conscientious objector awarded the Congressional Medal of Honor for his selfless courage on "Hacksaw Ridge."

After a lengthy absence from the Hollywood forefront, director Mel Gibson ("Braveheart," "Apocalypto") is back with a heroic and brutal war film that checks off all his recurring themes. A brave man enriched by a beautiful woman is persecuted for his beliefs and brutalized before becoming a Christlike symbol of courage. As a biopic, the film treads familiar ground, but as a war film, Gibson doesn't pull any punches, plunging us into a true hell on earth. And yet, for all the gory mayhem on screen, the film is uplifting, Doss's dogged determination to prove his mettle turning all who opposed him around. The film begins in the Blue Ridge Mountains of Virginia where the young Desmond learns an invaluable lesson after smashing a brick over his brother's head. Gazing on in horror as his parents attend to Harold, Des wanders into the house and stares at the Biblical illustration of Cain and Abel hanging in the hallway. But ironically, Desmond has grown up in a violent home, his WWI vet dad Tom's (Hugo Weaving) wartime experiences having turned him towards the bottle. The first time we see Des holding a weapon, it is to pull it out of his drunken father's hands in defense of his mother (Rachel Griffiths). It's his mom he's with, her in choir practice, he cleaning the church's stained glass windows, when he spies an accident outside and runs to help. At the hospital, he's told his handy work using his belt as a tourniquet more than likely saved the man's life. Then he spies a nurse and can see and hear nothing else. Dorothy Schutte (Teresa Palmer, "Lights Out") has thoroughly enchanted him and his awkward but sweet courtship wins her hand. Both events lead him to his solution to enlisting. He'll become an army medic, saving, not taking, lives. Things turn out to be not that simple when he arrives at Fort Jackson and is nicknamed Private Cornstalk by drill instructor Sergeant Howell (Vince Vaughn). When he refuses to take up a weapon, both Sarge and Captain Glover (Sam Worthington) believe he will be a detriment to the safety of their men. Doss endures beatings, bullying and shunning, but persists, winning his eventual trial with a surprising assist from his father. Cut to Doss's unit's arrival in Okinawa, where they are faced with the soaring, titular ridge, webbed rope hanging down its side. Once the men have clambered to the top, all hell breaks loose. Immediately, two are cut down, smoke and mist obscuring their enemy. 'If we can't see them, they can't see us,' says Doss, who immediately runs out into the line of fire. Smitty (Luke Bracey, 2015's "Point Break"), his worst abuser, becomes his partner, spotting the medic as he comforts and drags the injured to relative safety. The two even team up for the night in a foxhole, but it is the second day on the ridge after everyone else has retreated that Doss pulls off a near miracle. As Doss, Garfield has a puppyish charm which works both as a believability factor in his wooing of Palmer and as a deniability factor for his visibly tougher looking fellow soldiers. His is a simple, effective if not necessarily deep performance. Thankfully, he's supported by a strong cast, Vaughn providing the de rigeur comically tough drill sergeant, Worthington no nonsense leadership. In addition to the very good Lacey, standouts among the soldiers include Goran D. Kleut ("Gods of Egypt") as Andy Walker aka Private Ghoul and Luke Pegler ("Fool's Gold") as 'Hollywood,' a man so in love with his own physique Sarge puts him through training drills nude. Palmer is a symbol of beauty and purity, shot in a Madonna-like glow. Andrew Knight ("The Water Diviner") and Robert Schenkkan's (2002's "The Quiet American") script works in shades of light and dark through each of the film's two halves, the first a mixture of tragedy, romance and comedy, the latter horror and hope. Gibson's Virginia feels more like pre-war Australia, partially due to his casting (although only New Zealander Worthington's accent slips in the second half), but his Okinawa is blasted rock, death and human entrails. Gibson cannot resist an overt Christ metaphor after Doss performs his final act amazing act of courage on the battlefield, but he's just about earned it, so incredible is Doss's story. His direction is classical, yet modern in its blunt depiction of bloody death and suffering. Yet for all its power, there's something almost too simple about "Hacksaw Ridge," its leading man's convictions never internally tested. Grade: