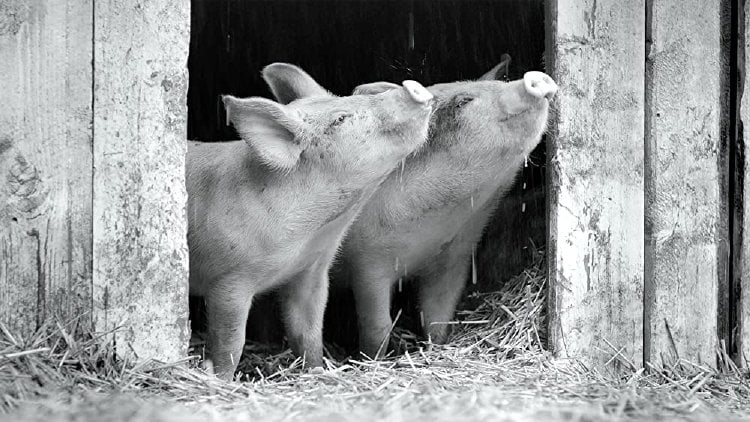 In the doorway of a barn on an idyllic farm in Norway, we see a giant sow lying on her side making gentle blowing sounds.  Suddenly a tiny piglet appears, then another.  Too many to count battle for the sow’s teats as yet another, slick from birth, struggles for purchase.  We will watch that sow tend to her young, especially the littlest one, as they grow.  Her name is “Gunda.”

With artfully placed cameras shooting in black and white and an incredibly layered, natural sound mix, cowriter (with his editor Ainara Vera)/director Viktor Kosakovskiy ("Aquarela") invites us to consider the lives of the creatures we share this earth with.  “Gunda” is such a profoundly moving piece of work, noted vegan Joaquin Phoenix signed on as executive producer after seeing it.  There is no color, no dialogue, no subtitles and no musical score, yet the film engrosses for every one of its 93 minutes.

Kosakovskiy was able to get incredibly close to the animals he is filming without disturbing their natural activity (Gunda’s hut was recreated with removable panels which allowed 360 degree camera access).  We are so close to those newborn piglets, it is a challenge to try and figure out how many of them there are.  Even so, we will be amazed when Gunda gets up and begins digging about in the straw with her snout, finding the littlest one who got lost in the shuffle.  Later, we will watch her prod this small one along as it lags behind its siblings.

There is other life on this sprawling farm.  A crate crammed full of chickens is plunked down in a field (no humans are seen).  The first couple cautiously make their way out, Kosakovskiy focusing on one’s claw tentatively grasping earth and grass as it makes its way forward.  One backwards tracking shot amazes, a chicken running towards us more beautiful than one would imagine.  Then, after having had a cinematic analysis of the movement of a bird’s legs we are introduced to a chicken with only one, the bird balancing itself regally, its movement confident, if occasionally helped along by its wings.

Have you ever imagined an adult cow could gambol?  How about an entire herd of them?  When cows are released from a long tin shed, their joy at being outdoors is palpable.  Once they’ve gotten to the bottom of the field and begin to settle down, we observe them pairing up in head-to-tail configurations, the better to assist each other with flapping ear and swatting tail fly removal.

When a light rain moves through, two of Gunda’s piglets position themselves in her hut’s doorway, the better to catch raindrops in their mouths, perhaps the film’s most enchanting image.  But even on this, the most humane and organic of farms, life is precarious.  When a steel container is backed into Gunda’s yard, we can only hear the pigs’ mounting alarm.  Once it’s driven off, only Gunda remains to search and sniff for her no-longer-so-young.  It is as honest a picture of grief as I’ve seen on a movie screen.

A mamma pig suckling her babies, a one-legged chicken surveying her realm and a herd of cows gamboling in a field. These are the subjects of life on a free-renge farm that is a vast contrast to the factory farms that treat the animals as mere commodities, not living and breathing beings. We get a look at the right side of farming in “Gunda.”

This lyrical little meditation on farm life does not have a lot of action, unless you consider a dozen piglets vying for mommy’s teats. What it does have is a gentle flow of life on a farm – the kind of place that I would have loved as a kid. The assured one-legged strut of the chicken, the playfulness of the cows and the tolerant momma pig and her brood are all visions of a gentle, satisfying life – except for mamma, who will have her own loss to deal with. If you want to know what that loss is, go see “Gunda.”