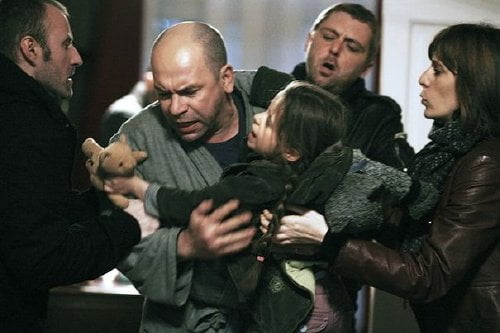 Alain Marecaux (Philippe Torreton) is an unassuming court officer, a bailiff, living in the north of France. One day the police arrive at his door to arrest him and his wife Edith (Noemie Lvovsky) for being part of an underage rape ring. The law should protect the innocent but or Alain, Edith, and 16 others accused of the crime, they are presumed “Guilty.”

A bailiff and his wife are rounded out of their house in the middle of the night accused of heinous child rape and pornography charges as their kids are hauled off and the family dog left with extra food and water. Told entirely from Alain Marecaux's point of view, this true French travesty of justice story almost makes the West Memphis 3 case look somewhat reasonable. Torreton went through a radical physical transformation to play the role as his character goes on a hunger strike.

This incredible true story of judicial injustice and national scandal in France prompted me to do the Wikipedia thing and read up about what the French call their greatest judicial scandal in memory. Director and co-writer Vincent Gareng captures the horror of the ordeals of the falsely accused in the child rape conspiracy through the eyes of Alain Marecaux. Philippe Yorreton expertly shows us the effect that the tragedy has on him and the rest As I watched “Guilty” my mind kept saying “this is unbelievable” (prompting my follow up on Wikipedia later). This is a case, though, where the unbelievable is true and the filmmaker does an honest job of bringing the scandal to the world to see. While the story focuses on Marecaux, the filmmakers give good shrift to the entire scandal, the players and the judicial system that would allow such a miscarriage of justice to even happen.