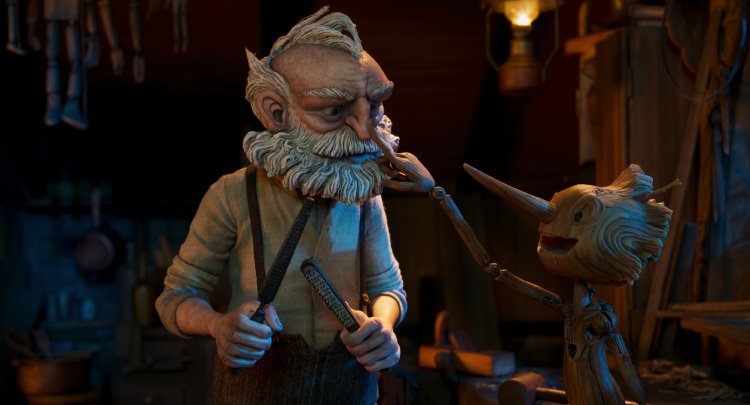 In 1916, in a small Italian village, woodcarver Geppetto (David Bradley, “Harry Potter’s” Mr. Filch) has been hired to repair the giant crucifix in the town’s church.  Leaving one night, his son, Carlo (Gregory Mann) runs back inside to retrieve his perfect pine cone and is killed when a bomb is dropped.  Despondent, Geppetto stops working and begins to drink.  One night, in a drunken stupor, he carves a small boy puppet (also Mann) which is granted life to comfort the old man by a Wood Sprite (Tilda Swinton) in “Guillermo del Toro’s Pinocchio.”

This one has me perplexed.  While I usually embrace the dark and grotesque and appreciate animations that respect the work of admired illustrators like Gris Grimly's 2002 artwork, with the exception of Pinocchio himself I found this to be one ugly production, its Blue Fairy substitute resembling Ray Harryhausen’s Medusa.  Guillermo del Toro and Patrick McHale’s screenplay, closer in tone to Carlo Collodi’s 1883 original than earlier productions, is far more intriguing than Disney’s takes, updated to be given a backdrop of Mussolini’s Fascist reign against which Geppetto must realize he’s saddled his new creation with unwarranted expectations, the ‘real boy’ the one Pinocchio innately is.  But again, with one exceptional detail involving a matchbook used as a coffin, its ending, while presented in upbeat fashion, is jaw-droppingly downbeat.   The filmmakers have also decided to make this a musical which, while not a problem in and of itself, becomes one when the songs are as exceedingly bland as those written by Alexandre Desplat with lyrics by the screenwriters and Roeban Katz.

We’re introduced to the story by Sebastian J. Cricket, a blue and black creation with dead eyes and a moustache sparked to life by Ewan McGregor’s playful warmth.  Concerned by the naïve Pinocchio’s exuberant embrace of life, Sebastian tries to keep the puppet on the right path, advising him to obey his father, but the headstrong puppet marches right past school and into the con of Count Volpe (Christoph Waltz), who steals Pinocchio for his puppet show.  There Pinocchio will gain an ally in the blind-in-one-eye baboon Spazzatura (Cate Blanchett) when he stands up for the wretched animal as Volpe beats it and learns that his father hasn’t gotten any of the promised 50% in profits.  With Volpe salivating over a visit from Il Duce himself, Pinocchio turns his ‘patriotic’ number on its head.  But the puppet’s trials are not over, as now he is recruited by hometown fascist Podesta (Ron Perlman) to be an ‘immortal’ soldier.  Once again Pinocchio prevails, though, by taking pity on another, this time the man’s son Candlewick (Finn Wolfhard).

Meanwhile, Geppetto, who has been searching for his son with Sebastian, has landed in the belly of a sea beast where he’ll be reunited with Pinocchio along with Spazzatura and where Pinocchio will be given the chance to make one final, life changing choice.

Directed by Guillermo del Toro (“The Shape of Water”) with Will Vinton Studios’ stop motion animator Mark Gustafson (TV’s ‘Claymation Easter’) with a smoothness that belies the labor intensive craft, the production favors brown, its puppets’ exaggerated facial features making them grotesques.  Pinocchio himself is beautiful though, his eyes naturally incorporated as knots in the burled wood of a head which juts off into jagged locks of ‘hair,’ his joints connected with crude wooden nails.  Del Toro’s vision aligns the church both with fascism, the village Priest (Burn Gorman) Podesta’s right hand, and with Pinocchio, whose irreverent crucifixion pose foreshadows self sacrifice.  That frightening looking ‘Wood Sprite’ has a sister of sorts in Death (also voiced by Swinton) who wears a similar blue mask over her blue leonine body and who greets Pinocchio several times over the course of the film.  In a very Lynchian touch, the Netherworld is peopled by skeletal Black Rabbits (Tim Blake Nelson) playing cards whose purpose is a mystery.

“Guillermo del Toro’s Pinocchio” reaches for something weightier using old world craftsmanship, but it’s a hit and miss affair that should have ditched the songs and injected a little more beauty into a world that looks like the back recesses of an antique shop.