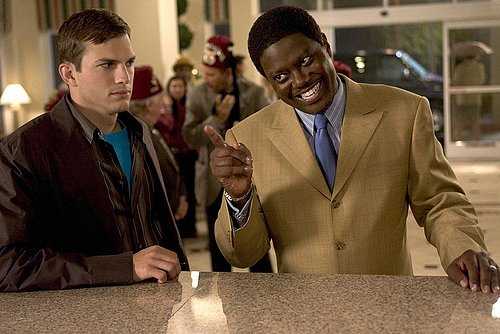 Percy Jones (Bernie Mac) is a doting father who has done everything he could for his daughter Theresa (Zoe Saldana). When she announces that she is coming home with her new boyfriend in tow, Percy has visions of a Denzel Washington clone. He isn’t ready, though, to meet the man of Theresa’s dreams when he finds out that Simon Green (Ashton Kutcher) is quiet a few shades lighter than expected in “Guess Who.”

Angered by his lousy boss, star employee Simon Green (Ashton Kutcher, "The Butterfly Effect") quits his job, but is afraid to tell this news to his fiancee Theresa (Zoe Saldana, "The Terminal") it being just one day before he will meet her parents for the first time. But Theresa's also lied by omission - Simon doesn't know that her parents, Percy (Bernie Mac, "Ocean's Twelve") and Marilyn Jones (Judith Scott, "Soul Plane"), are not expecting their daughter to be bringing home a white man in "Guess Who." Balance out the few highs and many, scatological lows of "Meet the Parents" and you've got "Guess Who," a movie whose mild brand of comedy is floated by an enjoyable ensemble. Ostensibly a remake of the old Hepburn/Tracy "Guess Who's Coming to Dinner?," the rewrite (story & screenplay by David Ronn & Jay Scherick, "National Security", screenplay by Peter Tolan "Analyze That") merely flip flops the racial divide and goes its own way. Theresa hopes to announce her engagement over the weekend as her parents renew their vows and celebrate their twenty-fifth wedding anniversary, but dad's reception of Simon is less than welcoming. After finding his daughter and boyfriend engaged in a lingerie frolic in her bedroom (a scene right out of one of the "American Pie" movies), Percy banishes the young man to a sleep sofa in the basement. To keep his mind at ease, Percy bunks in with Simon too. He then begins a campaign to prove that Simon is both a racist and a liar, but his plan backfires and a war of the sexes is waged on the eve of the big party that leads to mano a mano bonding. In other words, "Guess Who" doesn't offer much that we do not expect, but it does have a number of things going for it, like the uncomfortable moments between Simon and Percy whenever a car radio spits out a racially themed song ("Brother Louie," "Ebony and Ivory") or a scene where Percy makes Simon tell Black jokes at the dinner table. Kutcher may not be a very good actor, but he has a knack for physical comedy and has comfortable chemistry with both his off-screen buddy Mac and his romantic costar Saldana. Other enjoyable couplings are Mac and Scott, who enjoy a marriage not unlike the one in "The Bernie Mac Show," and Saldana and Kellee Stewart, who plays her sister Keisha. Stewart is adept at dropping punch lines, greeting Simon's presence with 'Are we being audited?' The Jones's family and friends are all well cast and enjoyable to be around. The filmmakers make a lot of to do about Simon's lost job without telling us what happened. Director Kevin Rodney Sullivan ("Barbershop 2: Back in Business") makes this feel like a nagging oversight until the explanation is beautifully worked into the film's climax. If only the powers that be had had the sense to ditch a truly stupid go-cart competition between Mac and Kutcher, "Guess Who" may have seemed better than it is. As it stands, its better than 2003's "In-Laws" remake and wraps with a little bit of good will and an amusing musical number.

The 1967 Tracy/Hepburn vehicle, “Guess Who’s Coming to Dinner” represented Hollywood’s naïve depiction of interracial relationships at a time when the world was changing, fast. But, that film had more in common with movies like “Father of the Bride (1951)” than it did to equal rights and Martin Luther King. Guess Who” roots itself more in modern, situational kinds of comedy like “Meet the Parents” than it does with the film that shares, at least part, of its title. Helmer Kevin Rodney Sullivan (“Barber Shop 2”) uses the personal chemistry between Bernie Mac and Ashton Kutcher, off screen buddies in real life, to create an amusing little film that has the feel of an extended TV sitcom. The unmitigated TV comedy aspect of “Guess Who” is offset greatly by the richly cast supporting roles. Zoe Saldana is a three-dimensional character and is believable in her affection for Simon – despite the fact that many of the problems that arise between them could have been settled with a bit of talking. But, then, we wouldn’t have a typical Hollywood movie, would we? Judith Scott, as Percy’s wife, Marilyn, is also a fully rounded character and not just the dutiful and loyal spouse. The rest of the supporting cast, especially Marilyn’s posse of girlfriends, help provide the film’s sassiness. Don’t expect too much by way of originality with Guess Who.” Its television roots are too deep to propel it to the pantheon of top comedies. It is an amusing, breeze way to spend a couple of hours and have a chuckle or two, if not an out loud laugh.