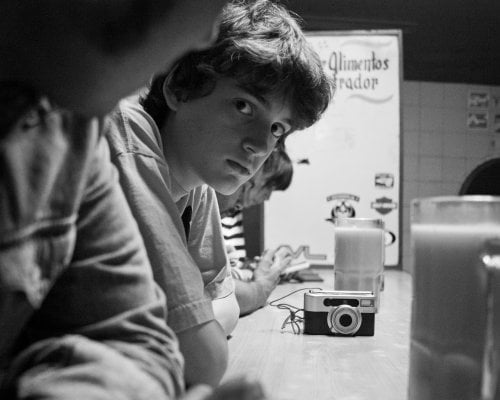 Cowriter (with Gibrán Portela)/director Alonso Ruizpalacios's first feature embraces a distinctive, immersive style that captures the feel of a specific moment in time navigated by a group thrown together by circumstance. This often dreamlike film, shot in boxy, academic ratio in black and white by cinematographer Damián García ("El Narco"), shows the influence of the French New Wave and Fellini, even dipping into David Lynch territory with its unique sound design (Pedro ‘Zulu’ González, Isabel Muñoz, Kyoshi Osawa, Gabriel Reyna). "Gueros" (the title literally means blond, but is a word used to refer to light skinned people) is episodic and rambling in nature but it marks Ruizpalacios as a filmmaker to watch. The fair Tomás doesn't know what to make of his darker brother, whom he calls Sombra. The guy didn't even bother to come to the bus station to pick him up, appears to have little in the way of food and coaxes the Down Syndrome child, Aurora (Camila Lora), of a downstairs neighbor to send up an electrical cord in a basket for power. Sombra and Santos are merely existing. But once they have a mission, Mexico City becomes a vast area for exploration beginning with the student guarded, locked down University, where Federico's dream girl Ana (Ilse Salas, "Cantinflas") is trying to unite students in political disarray. Leaving her boyfriend Furia (Raúl Briones), who has challenged her stance, Ana joins the group as they track Epigmenio from the hospital, through a dangerous part of town, to the zoo where his caretaker Isabel (Laura Almela, "Amores Perros") provides clues to his whereabouts. The film is more notable for its moment to moment tone than for anything that happens, Epigmenio the McGuffin that drives the journey. There are some dazzling shots, such as when García turns his camera upside down as Tomás runs along a beach, his shadow replacing him or as Fede contemplates a caged tiger, the personification of his panic attacks. As the group mingles with varying factions of the student body and Mexico City's artistic community, an impromptu jump into a nightclub pool echoes the famous fountain scene of "La Dolce Vita." Later, a stopped car in a traffic jam summons up Godard. Sound is sometimes cheeky, denying us the music of Cruz as each new listener slips on head phones, yet the soundtrack is stuffed with vintage Mexican artists, the old songs working perfectly with this tale of youth trying to define their future. Tomás's photography throughout the film also shows respect for the past, documenting the hospital bed where Cruz once lay or the dead plants of Santos's college thesis. It is one of Tomás's shots that ends the film, his brother smiling as he enters the student march his Ana has just disappeared into. It's almost ghostly, a historical record of a man on a crossroads. Grade: