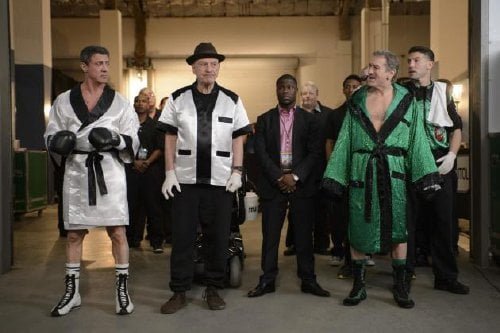 Thirty years ago, Pittsburgh heavyweight champ Henry 'Razor' Sharp (Sylvester Stallone), for reasons which he kept to himself, walked away from what would have been the decisive fight between himself and Pittsburgh's other great boxer Billy 'The Kid' McDonnen (Robert De Niro). Razor returned to welding steel while The Kid does stand up at the popular downtown restaurant he owns, still taking swings at Razor. When the son, Dante Slate, Jr. (Kevin Hart, "Think Like a Man"), of their old promoter, tries to make some money by getting the old champs to perform for a video game, their combustible meeting goes viral and Razor's financial hardship after a layoff makes him agree to the real deal, a heavily promoted "Grudge Match."

Late night television writers Tim Kelleher and Rodney Rothman and director Peter Segal ("50 First Dates," "Get Smart") make no apologies for the fact that their dramedy is really a matchup of the two greatest boxers of late 70's cinema, "Rocky" and 1980's "Raging Bull." What's surprising, though, is that Stallone, whose Razor is based upon his own fictional Rocky Balboa, conjures real flesh and blood, acting rings around his "Cop Land" costar De Niro, who mostly mugs his way through this reinterpretation of the real Jake LaMotta. The film is shamelessly obvious and occasionally misguided, but Stallone gives it genuine emotional heft and Alan Arkin, as Mickey stand-in Louis “Lightning” Conlon, provides lots of laughs. Razor's a sad sack blue collar guy who takes care of his old trainer, shops at discount stores and spends his free time making small dog sculptures out of scrap metal, clearly the 'good guy' of the story, while The Kid owns several businesses, picks up women using past glories and continues to accuse his former foe of chickening out, decidedly no sweetheart. The film's climax will clearly take place in the ring, but the film's driving force is to lead us to what caused Razor's withdrawal all those years ago. The filmmakers even have the chutzpah to borrow the catalyst which sets their plot in motion from Stallone's own '30 years later' sequel, "Rocky Balboa," made more comedic by the appearance of the two former pros decked out in motion-capture suits. The Kid's baiting results in an all out, studio-wrecking melee, putting the old time boxers' names out in public for the first time in decades. Stallone has a way with underselling the constant fat jabs he pokes at De Niro, but a lot of the comedy leans on ageism and product placement (Ben Gay, Geritol, etc.) when it's not simply resting on recognition (the raw egg drink, billboard boxing apparel, etc.). Razor must face up to a past emotional judgement which has affected his whole life while The Kid must learn to accept responsibility for his bad behavior - these old guys both need to grow up. Berg's direction keeps things going on their expected track with a few inexplicable missteps. Hart, too manic throughout, holds a 'Grudgement Day' press conference which we're supposed to believe is sparsely attended while Sharp and McDonnen are at the height of their social media stardom and an abrupt car accident seems a non sequitur, serving only to reiterate a later bit of plot (again, right out of "Rocky II") whose point has already been made. The fight which spawns the viral video is so poorly staged, one must make assumptions as to who's punching who. But he also has a knack for rehashing, a long shot training sequence with Razor shadow boxing behind Lightning on a motorized three-wheeler bringing a genuine smile. Stallone channels Rocky yet creates a new character, with different motivations and an underlying sadness. Alan Arkin takes Lightning's old school methods and has a blast tormenting his costar. There's a palpable affection between these two. De Niro shows a lack of vanity, but he doesn't really come into his own until later stretches, when he finally brings some genuine emotion to the table. Kim Basinger gives a fine turn as Sally, Razor's former girlfriend looking to rekindle their romance. Jon Bernthal ("Snitch," "The Wolf of Wall Street") is OK as her son BJ (joke alert!) and Lightning's reluctant counterpart while Camden Gray's a tad too self conscious as BJ's son Trey. In a small role Frederick Douglas Plunkett Jr. is memorable as Razor's sounding board Walter. The film offers few surprises, but anyone enjoying Stallone's late career should find it plenty entertaining. The actor's own recent revisiting of his most famous character, "Rocky Balboa," was a far better movie than this one, but as a comedic take, "Grudge Match" mostly lands its punches.