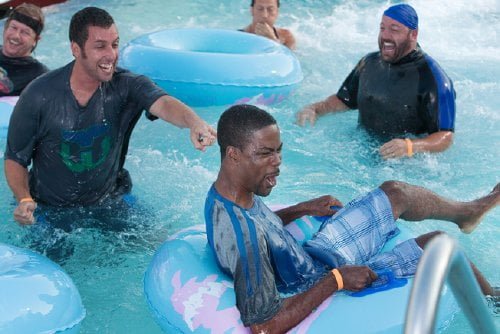 Five old friends, grade school basketball teammates and buddies 30 years ago, gather one 4th of July weekend to mourn the death of their late coach, “Buzzer” Ferdinando (Blake Clark). They have grown far apart over the years since their glory days but when together again, the quintet realize that they are missing something – the inner child – and they explore what it really means to be “Grown Ups.”

When their beloved Coach 'Buzzer' (Blake Clark, "50 First Dates," also the voice of "Toy Story's" Slinky Dog) dies, former city basketball champs of 1978 Lenny Feder (Adam Sandler), Eric Lamonsoff (Kevin James), Kurt McKenzie (Chris Rock), Marcus Higgins (David Spade) and Rob Hilliard (Rob Schneider) gather from across the country with their wives and children to attend the funeral in New England. Hot shot Hollywood agent Lenny has rented a huge lakeside retreat for the old friends to spend the weekend together for the first time as "Grown Ups." Adam Sandler & former SNL cowriter Fred Wolf have cooked up an excuse for them to get together with their own friends and family and make a movie in Sandler country where they can all have fun and while the underlying Sandler sweetness is in evidence (valuing family, anti-Hollywood, bucking for the little guy), it's been tackled to the ground with crotch shots, horndogginess, and every bit of crude physical gross out humor from the sight of Mama Ronzoni's (Ebony Jo-Ann, "Pootie Tang's" mother) bunions to a four year-old breast feeder to the sickly white of Wiley's (Sandler perennial Steve Buscemi) thin skin. Feder's the rich one, married to fashion designer Roxanne Chase-Feder (Salma Hayek Pinault?). They have three kids, the nanny texting, video game obsessives Greg (Jake Goldberg) and Keithie (Cameron Boyce) and the animal loving little sister Becky (Alexys Nycole Sanchez). Eric's hiding the fact that he's out of work and trying to cover up the embarrassing antics of blue collar wife Sally (Maria Bello??), the inappropriate milk maid. Kurt's a house husband who is taken for granted by his pregnant wife Deanne (Maya Rudolph, the only cast member who consistently makes her lines funny) and heckled by his mother-in-law. Marcus is the single one who drools over the late arriving and unlikely daughters of new agey Rob, now on his fourth wife Gloria (Joyce Van Patten), about twenty years his senior. Rob and Gloria's sex life is the object of more gross out humor. Except for Rudolph's occasional zinger (Deanne is a fan of 'gotcha' jokes), none of this is funny. When the whole gang goes to a water park (pee in the pool joke alert!), they run into their decades ago basketball nemesis Dickie Bailey (SNLer Colin Quinn) and his cronies and a climatic rematch is scheduled for July 4th. While nothing that happens in this film is at all surprising, in Sandler's defense, he does take an anti-commercialism stance, his Feder intent on getting his kids away from their electronic gadgets and into Chutes and Ladders and cup phones. Then again, he's also got product placement for KFC and Dunkin' Donuts. Everything he does, from Feder's big-hearted rematch play, is countered by something base, like the snipped vocal cords of the Lamonsoff's dog, used for laughs. It's that long-standing and frustrating Sandler dichotomy. Director Dennis Dugan ("Beverly Hills Ninja," "You Don't Mess with the Zohan") is the go-to guy for getting stuff down on film and that's about all he does here. He doesn't know where to place a camera and he's not backed up by cinematographer Theo van de Sande's ("College Road Trip") crappy camera work, all of which looks like it was shot through haze, and the less than slick editing by Tom Costain ("Bedtime Stories"), who cuts to a close-up in the middle of an incomplete pan shot. The film does showcase some nice Massachusetts locations, but since when do people go to Essex's Woodman's, famous for fried clams and lobster, and order hamburgers?

With the exception of the terrible “Little Nicky,” Adam Sandler movies have always had charm, to varying degrees. I have to add “Grown Ups” to the charmless list. Supposedly aimed at a 30/40 something audience, this sophomoric gutter romp – farts, peeing in the pool, gross feet and (he says in horror) breast feeding a four-year old in public, twice – is really targeting 18 year olds, and males at that.. Sandler is Lenny Feder, a big shot Hollywood agent married to successful clothing designer, Roxanne (Salma Hayek), is sidetracked, by the funeral, in taking his family to Milan for her show in fashion week. The rest of the gang – Eric (Kevin James), Kurt (Chris Rock), Marcus (David Spade) and Rob (Rob Schneider) – have not fared as well as Lenny, but they have all found their level in life. With all of the friends converging on “New England” for the funeral, Lenny magnanimously rents a luxury lodge for all for the entire weekend even though the Feder’s only plan to stay over night. After a bonding dinner with friends and family – including Kurt’s nasty, flatulent mother in law (Ebony Jo-Ann) – starts the weekend where they find their inner kid, again. The movie begins with THE big basketball game where the boys had their day in the limelight. Of course, one way or another, the big finale will include, you guessed it, a basketball game – with their old opponents, all growed up and wanting a rematch. This is a Happy Madison product and, as expected, it is chock full of his film alumni - Rob Schneider, Blake Clark, Steve Buscemi, David Spade and Chris Rock and many others. Kevin James is the only newcomer to Sandler’s guy posse. I had hoped, with Salma Hayak, Maria Bello and Maya Rudolph involved as the spouses, that there would be a touch of class in “Grown Ups” but, alas, they lowered their aim to the puerile level of humor abundant here. Of the entire cast, Maya Rudolph fares best as Kurt’s very pregnant, sharp-witted wife, Deanne. There are some positive aspects in “Grown Ups,” though. The importance of family, friends and good sportsmanship are evident, hit you over the head evident, so I have to give Sandler a couple of points for that. However, the minuses far outweigh the pluses and, for any reasonably intelligent adult, it is a brain drain. Unless you like seeing someone kicked in the privates repeatedly.