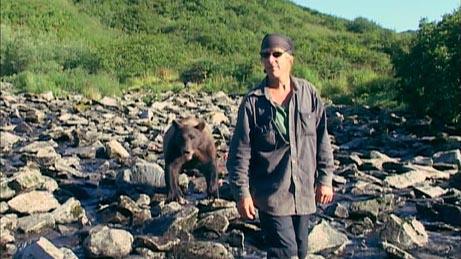 For thirteen years, failed actor and controversial cofounder of Grizzly People Timothy Treadwell camped in Alaska’s Katmai National Park and Reserve to study, protect and befriend native grizzlies, flouting park laws in the process. During the last five years, Treadwell videotaped extensively, right up to the sound-only recording of his and girlfriend Amie Huguenard being eaten by one of his beloved bears. Legendary German film and docu-maker Werner Herzog took Treadwell's hundred hours of videotape and has fashioned a most intriguing portrait of the "Grizzly Man."

After recently reflecting on his relationship with deceased actor Klaus Kinski in his documentary "My Best Fiend," it would seem that Herzog has found a new subject which reflects them both. Like Kinski, Timothy Treadwell was a controversial figure in a blonde Prince Valiant cut who often went apoplectic with cameras running and whose relationship with nature Herzog questions (in "Burden of Dreams," Herzog talks about Kinski's 'fake' nature loving, yet he ends "Fiend" with a butterfly perching all about the man). And yet, Herzog has admiration for Treadwell's obsessive filmmaking, a trait that could easily be attributed to himself. Timothy Treadwell is, indeed, the perfect Werner Herzog subject. Herzog starts off with an ironic gift from Treadwell, a beautifully framed shot of him in the park describing his bears and wrapping with 'I will fight to the death for them, but I will not die at their claws and paws.' He then interviews several participants in the aftermath of Treadwell's death, identifying each visually by their trade. Willy Fulton, standing beside his seaplane, is the pilot who flew Treadwell in each year, then returned at a specified point to pick him up months later. In October, 2003, though, he had to make several pass overs before he spotted a bear eating what appeared to be a human rib cage. Like a crime novel writer, Herzog begins to introduce potential suspects. Treadwell is seen on the banks of a river where Ollie, an old gaunt bear, seems to be playfully diving into the river, the pads of his feet sticking out of the surface. But the behavior, we are told, is troublesome, indicating a desperate bear looking for salmon carcasses on the riverbed very late in the season. Then Timothy introduces us to 'the Grinch,' a grizzly he named for her aggressive tendencies. A member of the retrieval team, Sam Egli, stands beside his helicopter and tells us four garbage bags 'of people' came out of the bear who was shot at the scene. Egli thinks Treadwell got what he deserved, opining that he only lasted this long because the bears thought there was something wrong with him. Ecologists, a native Alaskan historian and a bear biologist all express their concerns about what Treadwell was doing. Herzog counters with what an incredible filmmaker he was becoming, citing happy accidents like friendly foxes sticking their snouts into Treadwell's lens and the repetitive takes Treadwell to ensure continuity in his eventual opus. The 'character' he presents is like Steve Irwin, Australia's crocodile hunter, crossed with Mr. Rogers ('That's a big bear!') and some kind of crazed Evangelist ('that poop was in her!' he marvels, finding a warm bear dropping in the wake of one of his female 'friends'). Timothy also tells his audience he is alone with the bears for months on end, but Herzog disproves that as did Treadwell's death at the side of his girlfriend. Herzog could not gain the cooperation of Amie's friends or family and finds few images of her on Treadwell's tapes, the last scarily close to an unknown bear which may, in fact, have been her killer (her diary also noted a fear of the bears). Only Medical Examiner Franc G. Fallico, who seems as strange as Treadwell, comments on her, romanticizing her death based on that final tape which Herzog does not play in the film. Treadwell's personal demons are explored beginning with a visit to his parents. Timothy claimed on video that he cured his alcoholism for the bears, but what of his mental health? We witness disturbing rants and Herzog, once again alluding to Kinski and perhaps even himself, notes 'I have seen this kind of madness before on a film set.' Treadwell seemed to deny the bare facts of nature, which Herzog describes as chaos, mayhem and murder, and often seems delusional describing the outside threats to the animals. Herzog, the master storyteller, fills in significant and surprising facts about Treadwell's last days at the end of his film, building a case that the 'grizzly man' had become so anti-civilization he courted his own death. Treadwell even states that his death may be what is needed to publicize his cause. Assisted with a perfectly evocative score by Richard Thompson, Herzog has helped his subject make his film while questioning his reasons and his method.

Isabelle Huppert and Neil Jordan. How can you go wrong? First off, what was writer/director Jordan thinking? The story, by the director and Ray Wright, is wrought with clichés of other stories and their elements – “Misery (1990),” “Psych (1960),” “Room (2015)” and, for some reason, “Dressed to Kill (1980)” came to mind. Second, and more important, is Isabelle Huppert as the monster. I have followed her career since she first came to my attention in “Heaven’s Gate (1980)” and she has been a favorite actor of mine ever since. So, why did she agree to play the psychotic bad guy in a highly credentialed but, still, a B-movie, and not a very good one? I have to say I am stymied. Chloe Grace Moritz fares best as the naïve and trusting young woman who is, at first, duped by Greta’s kindly and desperately lonely façade. The cracks in the older woman’s pretence appear very soon (too soon to build suspense) and Frances tries to break off the budding surrogate mother/daughter relationship. Greta, of course, will not accept this and things quickly spiral down for the beleaguered young woman. Veterans Stephen Rea and Colm Feore are wasted in their incidental roles. I expected more from a filmmaker the caliber of Neil Jordan. It is telling that, during moments of high tension, I heard guffaws from members of the audience. And, it is the first time that I did not like Huppert in a movie. Alas.