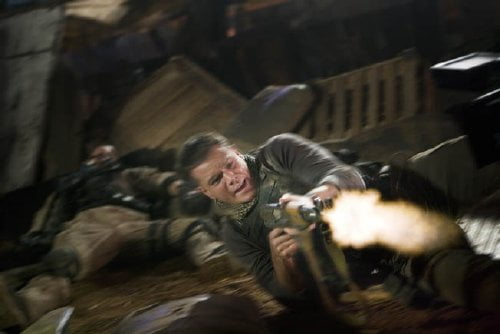 Chief Warrant Officer Miller (Matt Damon) begins to question authority when the Intel he's been provided to locate WMDs in and outside of Baghdad turns up nothing three times running. His commanding officer Colonel Bethel (Michael O'Neill) wants him to put his nose down and follow orders but when Miller confides in C.I.A. Station Chief Martin Brown (Brendan Gleeson, "Harry Potter's" 'Mad-Eye' Moody), he finds himself on the trail of a massive coverup being played out within Iraq's high danger "Green Zone."

In the press notes, director Paul Greengrass ("United 93," "The Bourne Ultimatum") is quick to point out that this is not an Iraq War film, but a thriller set in 2003 Baghdad. This perhaps explains why Brian Helgeland's ("Mystic River," "Cirque du Freak: The Vampire's Assistant") adaptation 'inspired by' Washington Post Editor Rajiv Chandrasekaran's highly regarded book "Imperial Life Inside the Emerald City" plays like the crib notes for documentary "No End in Sight" actioned up à la "The Kingdom" then capped off with a 'David conquers Goliath by notifying the media' cliché (wishful thinking in an era notorious for lethargic journalism). It's a simplification of a complex situation with black and white characters running through their paces for the popcorn crowd - Jason Bourne goes to Baghdad - without nearly the same level of excitement. No matter how many soldiers are lost in dangerous circumstances trying to recover WMDs that are not there, everyone up to the level of an Army General tells Miller that the Intel is solid and he should just follow orders. One day when he's out supervising some hole digging in downtown Baghdad, a native Iraqi, soon to be dubbed Freddy (Khalid Abdalla, "United 93"), comes with info that he has seen high-level members of Sadaam's military meeting secretly. Miller decides to act, using Freddy's car as cover and an unwilling Freddy as translator. The man whose home is being used for the meeting, Seyyed Hamza (Said Faraj), is captured, but Al Rawi (Igal Naor, "Rendition"), the "Jack of Clubs," escapes out the back door. Miller is ready to cut a deal with Hamza for information leading to Al Rawi, whom Hamza says knows about the WMDs, when special ops copters drop down and Special Forces Officer Briggs (Jason Isaacs, "Harry Potter's" Lucius Malfoy) forcefully takes command of Miller's prisoners. But Miller hangs onto Hamza's notebook and gets it to Brown who IDs it as lists of Al Rawi's safehouse addresses. Brown's counterpart/foe at the Republican Palace is Defense Intelligence Agent Clark Poundstone (Greg Kinnear), whom we've already witnessed stonewalling Wall St. Journal reporter Lawrie Dayne (Amy Ryan, "Gone Baby Gone") for access to his WMD source 'Magellan.' When she sees Miller meeting with Brown, she approaches him. By the time he actually talks to her, after reading her WMD articles mentioning sites he's already turned up blank, it becomes clear her 'high level source' has been feeding her bogus information. Miller goes rogue in order to stop the betrayal of the Iraqi higher up who told the truth only to be tagged as the source of misinformation, but in this atmosphere, where Iraqis distrust Iraqis (the U.S. is trying to put their puppet in place) and U.S. forces are working against each other, what are his chances? Paul Greengrass is an interesting director who has made seering docudramas ("Bloody Sunday," "United 93") and intelligent entertainment ("The Bourne Ultimatum"), but this attempt to combine the two is misbegotten. The only performance of note in the film belongs to Abdalla, whose Freddy is caught between the U.S. occupiers and his own people (and who, in the film's only real surprise, doesn't suffer the clichéd fate I'd assigned to him early on and whose last act is indeed ironic). Damon, who is caught between Gleeson's 'good guy' C.I.A. chief and Kinnear's 'bad guy' Defense Agent, is a bland hero here, a morally earnest guy whose actions don't jibe with those of a U.S. Army officer, no matter how well intentioned. Kinnear is way too simplistic, a symbol of the U.S. as evil incarnate. At least Gleeson shows a little personality. Ryan is neglected in a throwaway role, a well-regarded journalist reduced to 'humanahumana' after two or three questions from Miller. Cinematographer Barry Ackroyd ("United 93," "The Hurt Locker") gives Greengrass his now typical shakycam treatment stylized with the look of countless DIY Iraqi documentaries. John Powell's ("The Bourne Ultimatum," "Bolt") score is a pretty generic genre piece. There are a few action sequences, none as suspensefully executed as the ambush in "The Kingdom." The most biting moment in "Green Zone" is when a camera follows Miller through the Republican Palace through groups of middle aged Americans looking like tourists at a resort. 'Don't be naive' Brown advises Miller, only to have Miller throw the advice back in his face later on. Unfortunately, that seems to be the condition Greengrass and Helgeland hope to find their audience in in order to sell this as a revelatory political thriller.